Indigenous Peoples Stand Up to Save Native Corn 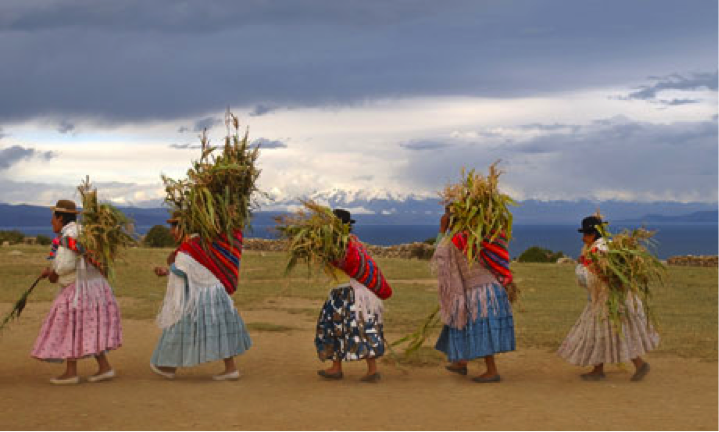 From time immemorial, indigenous communities in the Western Hemisphere have depended on corn not only as a source of nutrition, but as the center of their cultural traditions and spirituality. This past September, the Yaqui Peoples of Sonora Mexico hosted the inaugural “Indigenous Peoples International Conference on Corn” in the Zapoteca Nation of Oaxaca Mexico.

The conference, attended by 48 Indigenous Nations across from North, Central and South America, was created to encourage unity among indigenous communities, restore traditional economies, and ensure the survival of all native varieties of corn.

The Indigenous Corn Peoples are a part of long-standing cultural tradition tied to the natural world. The core principle of the Yaqui Peoples, “is the sacredness, mystery and life-sustaining power of the natural world and living things.”

They are deeply connected to their environment and express this through traditional ceremonies, songs, and dances. They consider their relationship with plants and animals as inter-dependent and interwoven. It’s for this reason that corn, the fundamental means of nutrition and healing, is so respected and cherished.

In indigenous communities, the people are directly related to all steps of the corn production process. Before the planting of the corn, there are ceremonies to express appreciation for the earth that allows the corn to be planted and for the water to allow it to grow.

When it is time to harvest the corn there is a ceremony celebrating corn as the source of life and creation. The harvesting of corn isn’t simply to acquire food, but celebrates the all-encompassing lifestyle of devotion to the earth.

One member of the Yaqui reiterates: “Our struggles to protect corn as a source of our lives cannot be separated from our struggles to defend our rights to land, water, traditional knowledge and self-determination.”

Environmental degradation is a global issue, but for the Yaqui community, it comes with devastating consequences. The booming agri-business has not only pushed many Indigenous communities off of their land, but also heavily promoted the use of chemical pesticides and genetically modified (GMO) corn.

The Mexican government has been a source of conflict, creating programs that cut off access to land and clean water, and mandating the use of this GMO corn for small farmers. The introduction of these corn variations has dramatically decreased the diversity and resiliency of traditional seed varieties.

The new strains of corn require much higher levels of agro-chemicals and water, which the Sonora desert ecosystem cannot provide. These negative effects aren’t only environmental. In 1997 Dr. Elizabeth Guillette conducted a study that detected high levels of pesticides in mothers’ milk and found severe learning and development disabilities in Yaqui children living in these high pesticide areas.

The Yaqui people started the Corn Conference as a way to gain support of Indigenous Corn Peoples from the area and to stop the environmental, cultural, and health degradation.

The Indigenous Peoples International Conference on Corn created an atmosphere where all Indigenous Corn Peoples could unite around a single mission to protect their sovereignty and identity. They called “for a new focus on sustainable and respectful use of corn as a basis for our traditional and collective economic, social and cultural development”.

The Indigenous Corn Peoples committed to halt the use of pesticides and GMO corn in their territories. They also resolved for all communities to focus on restoring and strengthening local markets and economies by protecting their food and seed sovereignty.

The conference attendees decided that the way to do this is by reestablishing Indigenous seed banks and trade relationships so that the seeds with the most resistance and adaptability to climate change can be used, replicated, and shared among communities. They believe that the renewal of an indigenous trading system in the Americas will be the most beneficial way to share knowledge across communities and ultimately, bring change.

Although the conference was only one step in the movement for Indigenous rights, the Yaqui ultimately achieved their greatest goal: to organize fellow Indigenous communities and Peoples to defend Mother Earth and her lands, water, forests and corn against the threat climate change and unsustainable industrial food practices.

By embracing their heritage as Indigenous Peoples to protect mother earth, they are also protecting the culture, spirituality, health, and traditions that have been passed on to them for centuries from being lost forever.