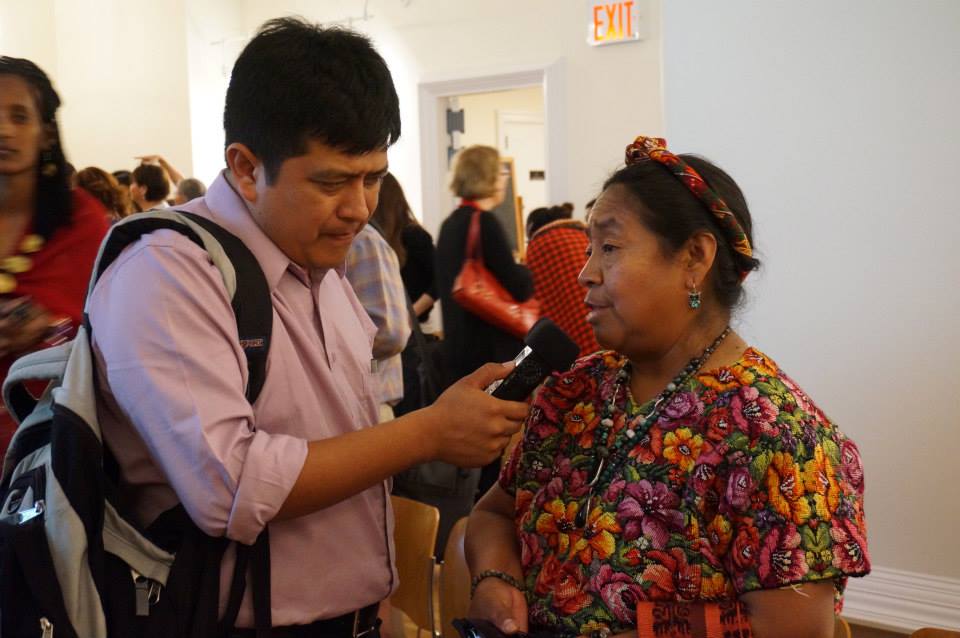 Cultural Survival’s newest program, Indigenous Rights Radio, has produced over 350 radio programs and counting on Indigenous Peoples’ rights. We highlight stories with Indigenous leaders who share the victories and strategies for defending their lands, languages, and cultures across the globe. We distribute the programs to a growing database of over 1,400 small community radio stations to get the message out to millions of Indigenous listeners around the world.

Programs are recorded and produced by Cultural Survival’s Indigenous Radio Producers, Kaimana Barcarse (Kanaka Hawai’i), and Rosy Gonzalez (Kakchiquel Maya) of Sumpango, Sacatepequez, Guatemala, in English and Spanish and have been translated into almost two dozen Indigenous languages. At this year’s United Nations Permanent Forum on Indigenous Issues in New York, Barcarse and Gonzalez had the chance to present some of our newest radio programs to an audience of their peers for feedback on the content and directions of the radio programs.

After listening to our programs in Quechua, Felicia Huarsaya of Peru told us that she was very happy to have programs available in her native language: “It’s excellent that you are informing communities on these topics in Quechua; for us, Spanish is a language of colonization, and we don’t understand it well. With programs like this that speak about how governments are supposed to be behaving towards Indigenous Peoples, we will be able to demand that they implement our rights. We will be able to rise up with one voice. These programs will be of great use in my community. I will bring copies home and hand them out so that everyone learns about the rights we have that are enshrined in Convention 169 of the ILO and in the UN Declaration on the Rights of Indigenous Peoples.”

Adam Ole Mwarabu (Maasai) from Tanzania, shared, “This is a really important initiative. Most of my tribe cannot read or write, so the radio is important for us. It is  a good tool because many people do not have access to the internet. It’s also a powerful means of communication because all of us come from a culture of storytelling.”

Barcarse shared an interview with Dalee Sambo (Inuit- Alaska), former chair of the Permanent Forum. Sambo had expressed her shock and dismay to Brazilian state officials at of their failure to address the concerns brought by Indigenous Peoples of Brazil at the 2014 Forum, which she chaired.

She specifically had asked the Brazilian officials to dialogue with the Indigenous Peoples on their own turf and reprimanded them for not following through. Our Indigenous producers caught up with her right after her statement to Brazil in which she shared her vision for the Permanent Forum being a place from which positive change can come for people on the ground.

A listener responded, “I like what you did with her interview. It was a good way of bringing the message home, so a grandmother or a young one could hear it.’’