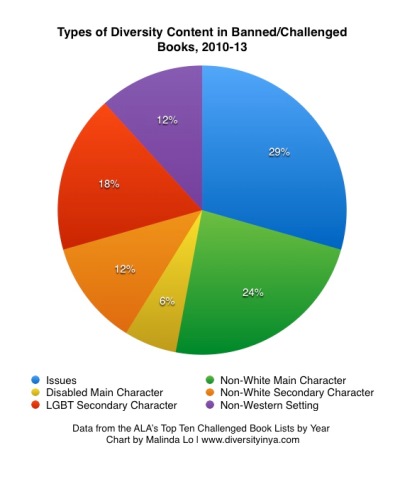 Using statistics from the American Library Association’s Office for Intellectual Freedom, Lo posits on the website that 52 percent of the top titles challenged since 2000 are about people of color and LGBTQ communities.

While many times the stated reason for a work’s challenge is cited as explicit language or religious viewpoint, Lo wonders if another bias is at work. Though by no means conclusive (the author herself admits to the limitations of the sample), the results illuminate the importance of raising awareness during Banned Books Week (September 21-27).

Since the publication of the study on the Diversity in YA website on September 18, Lo says she has received support from educators and advocates for diverse and banned books.

“I’ve been very gratified by the positive response to the post, and I hope it makes everyone involved with censorship issues look beyond the stated reasons for a book challenge, because I suspect those publicly stated reasons are sometimes hiding ulterior motives,” Lo told School Library Journal via email. “I’ve gone through my whole life dealing with subtle racism and subtle homophobia, and that’s the hardest kind to fight because people can deny it exists. But it does exist, and it has clear consequences.”

The following is an excerpt from Lo’s informal survey. See “Book Challenges Suppress Diversity” for the full post.

Although the data I am working with is a selected amount—these are Top 100 and Top 10 lists, not the raw list of 5,000+ challenges that the OIF received over the last decade —I think it’s still quite revealing. It’s clear to me that books that fall outside the white, straight, abled mainstream are challenged more often than books that do not destabilize the status quo.

This isn’t surprising, but the extent to which diverse books are represented on these lists—as a majority—is quite disheartening. Diversity is slim throughout all genres of books and across all age groups—except when it comes to book challenges.

The message this sends is loud and clear: diversity is actually under attack. Minority perspectives are being silenced every year.

I think it’s important to note that the reasons for a book’s challenge may be beside the point when the result is a broad silencing of these minority perspectives. Though some might protest a book’s explicit language, the real result is closing off dialogue and preventing readers from experiencing stories and lives outside the mainstream.

Shelley M. Diaz (sdiaz@mediasourceinc.com) is Senior Editor of School Library Journal’s Reviews. She recently received her MLIS in Public Librarianship with a Certificate in Children’s & YA Services from Queens College, and can be found on Twitter @sdiaz101.

banned books, books, diversity, multicultural
Previous Post Texas contenders for governor offer differing views on immigration issues in public debate
Next PostGuest Voz: Out of the shadows and out of poverty — Reducing poverty through immigration reform

Texas contenders for governor offer differing views on immigration issues in public debate
Comment
Guest Voz: Out of the shadows and out of poverty — Reducing poverty through immigration reform