Interview: Author William deBuys On Climate Change In The Southwest

By Ari Phillips
On the Road with Ari Phillips: Energy & Climate Change in the American Southwest

William deBuys is the author of seven books, including most recently “A Great Aridness: Climate Change and the Future of the American Southwest,” for which I wrote a Dot Earth book review last month. 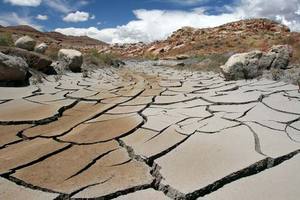 As part of my summer reporting project on energy and climate change in the Southwest, I had the pleasure of driving deep into the heart of the Santa Fe National Forest and interviewing deBuys at his home about an hour and a half from Santa Fe.

We discussed how he ended up in a far-removed mountain hamlet in New Mexico, what drove him to write his most recent book, and what the biggest takeaways from the project were, among other things.

When did climate change become a focus of your work?

I remember being in a conference in January 2006 in Albuquerque and climate scientist Jonathan Overpeck was giving a talk. He put a slide on the screen about predicted stream flow for the world. I realized this land that I love, the Southwest, is going to be transformed.

I always had this sort of abstract appreciation that it’s going to be hotter and that the climate is shifting and so forth. But seeing that map as a graphic drove it home. Something very very big was afoot. Something truly transformative. And in a sense it was sitting there looking at that map that planted the seed that later grew into “A Great Aridness.”

How did the book develop? How did you choose topics?

Were you surprised by your findings relating to ancient cultures and drought?

I’d been aware for some time of megadrought and the impact of drought on Chaco Canyon and Mesa Verde culture. A primary thing I took away from the research was that drought isn’t the only big factor. One of main themes of the book is that nothing happens for just one reason. The collapse of the Sand Canyon culture was as much a result of warfare and strife as it was of drought. Warfare over resources, driven in part by refugees flooding the area probably as other regions suffered from climatic shifts.

Climate was a big driver but not the only driver. We’re not just puppets of climate; the things we do to ourselves count a lot too.

You say energy is the most unreported story in the looming water crisis of the Southwest.

Almost all the ways we have of producing electricity require a lot of water, with photovoltaic and wind being exceptions for the most part. Coal-fired thermal production is very water intensive, nuclear is very water intensive. At same time dealing with our water resources is very energy intensive. Well over a fifth of all electricity in United States is used for moving water around.

Anytime we start talking about meeting new energy needs in the Southwest that ups ante in terms of water availability. And anytime we talk about increasing water availability that increases the amount of energy we need to get water from where it is now to anywhere in the Southwest. The water resources we live next to are already being used to their fullest extent. So any increase in water resources has got to come from somewhere else, and that means a whole lot of electrical juice.

I think in the end somehow we’re going to have to level off and maybe even shrink population in the region. As Edward abbey pointed out, continuous growth is the ideology of the cancer cell. How can we add four million people to the Tucson-Phoenix corridor? How can we add more people to Santa Fe and Albuquerque forever and ever and ever? There’s got to be a place that we stop.

What about water conservation efforts?

If it’s just you and me using a given amount of water, and we conserve so there’s more water, the water we conserve generally goes to the next subdivision or strip mall down the road. Pretty soon it’s not just you and me using that original water, its Joe and Sam and Abigail and Frances and all the rest. Everybody is a good person, everybody’s conserving, nobody’s using more than they need, but now we’ve got 10, 12, 30 straws in the drink that used to be just you and me.

So if supply is cut back through climate change and rivers don’t flow as much then we have to cut back on essential uses – now we’re talking about real suffering. Back in the beginning when it was just you and I, we were washing our cars, wasting water gleefully, and when drought came it was easy to cut back. When you get lots of people on the same resource and demand has hardened so everybody’s just using what they need, then cutbacks really hurt.

What about out-of-basin water supplies?

There will be talk about major projects, but I think chances of really big projects being carried off are small for a number of reasons. One reason is that with a big project somebody has to give up water and nobody in any constituency in any region has such a lackadaisical attitude to their resources. Secondly, at least politically the age of really big federal projects is over for the time being.

I think there’s going to be more little projects trying to move things around, not the grandiose ‘steal a river here and move it somewhere else’ type. There will be more wheeling that anything else: We create a little water here and we give it to the people nearby and in turn take water farther up the watershed that they’re otherwise entitled to. Its not moving water long distances, rather its more short deals to affect trade.

What did you learn about forest fires?

Right now if you could choose what you’ll be reincarnated as, picking a tree in the West would be a really bad choice. A better choice would be a clonal shrub.

Several big things are working against the trees. The increase in forest fires, an increase in insect damage and beetle caused death, and also out-and-out mortality from heat and drought. Last summer in Texas, according to the Texas Department of Forestry, between two and ten percent of all the trees in the state died – that’s a big number.

All those things are working against the interest of forest stability. Some people say the eco-zones are going to march up-slope in a formal manner; frankly I think that’s baloney. It presumes a couple of things. One is that the changes in the climate occur slowly enough that these slow growing plants can make the move. I think that’s ostensibly false. The changes are happening much too fast. It also presumes that as things move up-slope they have open opportunity to reestablish themselves. But that’s not how ecology works –there’s always something there. And that complicates the establishment of a new community.

It’s not like OK everybody get ready to march and we’ll go like cars in a jammed freeway making slow progress. There are a lot of things that aren’t moving. And a lot of those things have been transformed into something else. It’s going to be a chaos that may take many many years to sort out and it may never get sorted out if we just keep heating the climate. We’re never going to achieve equilibrium if things just get hotter and hotter and hotter.

What did you learn from the study of dendrochronology?

Dendrochronology, or tree-ring dating, is said to be the Southwest’s one homegrown science. It initially developed as a way to date events in the past, like archeological sites.

More recently dendrochronology has turned to reconstructing past ecologies. You can look at a tree ring and judge by its width whether it was a wet year or a dry year. There are various ways you can calibrate these judgments so you can actually quantify the amount of water that was in system, which can then be used to reconstruct river flows. You can also use burn scars at the base of trees to determine when fires moved through ecosystems; some trees might have 12 or 15 separable, identifiable burn scars on them. With these you can build a picture of the fire regime of pre-settlement ecologies.

That’s what Tom Swetnam and his colleagues down at the University of Arizona have been doing. They found that basically in the ponderosa pine and mixed conifer zone pre-settlement, roughly before 1890, in most areas of the Southwest, those forests had a cyclical, regular rhythm of light fires: A fire every three to six to maybe 15 years. The kinds of explosive, catastrophic fires we’re seeing today are an artifact to a very large degree of the cessation of that regular burn regime, the suppression of fire, and the build-up of fuels which can go off like a bomb under the right circumstances. And with climate change we’re getting the right circumstances more and more often.

Swetnam and his colleagues have determined that the fire season is something like 78 days longer than it used to be. That’s truly amazing.

Do you see yourself as climate change optimist or pessimist?

People ask me that all the time, I tell them that actually I’m a pessimist but neurochemically I’m an optimist: The future is grim but the sunrise is beautiful.

There’s so much beauty in the world, there’s always a lot of work to be done to protect it. Doing good work is inherently optimistic, so I want to just wring my hands and mash my teeth and keep chugging along. One of these days our society is going to wake up to what we’re doing and maybe we’ll make some good decisions finally.

Do you have a preferred way of talking about climate change with the public?

I guess the book presents it the way I know best how to do it. I think at the core of the problem you have to present stories, a narrative, not just collections of facts.

I think of the facts as being the DNA in a seed. But for that DNA to be carried around that seed needs to be encased in something that will stick to people’s clothing, like a cocklebur. A good story is like a cocklebur, it sticks to people.

Beyond that I worry that we’re mainly just preaching to the choir and crossing the line to persuade someone who is a denier or a doubter seems to me increasingly hard to do. As various studies have shown, people’s acceptance or rejection of climate change information seems to be based not so much on fact or on critical thinking about data, but about choices of identity and ideology that’s closely tied to identity. People are very resistant to surrendering the identity of who they are and their relationship to the group with which they feel at home.

There are many tragedies involved in climate change and one of the greatest ones is that in America climate change has become tied-up in the culture wars. I think the only thing that will turn that is around is more and more disasters. I’m not even sure that will be effective because I fear a lot of people’s response to disasters will be more magical thinking.

Whether it’s prayer rallies lead by the Governor of Texas or whatever, that magical thinking will be the choice of many people, and even in the face of horrible disasters we wont start making intelligent decisions.

Medications from Mexico are easily obtainable without a prescription at a local swap meet
Comment
Spotlight Nonprofit: Local farmers join forces to feed the hungry