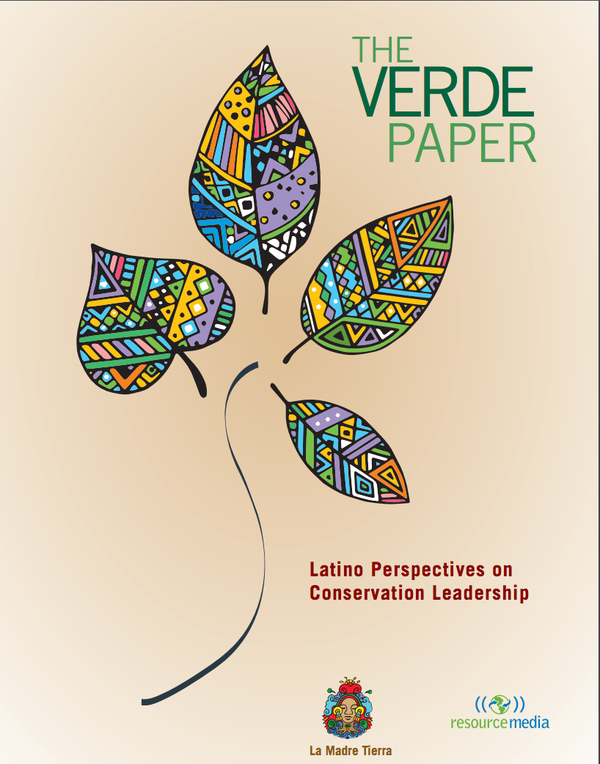 In January 2016, The Verde Paper: Latino Perspectives on Conservation Leadership was released by La Madre Tierra and Resource Media. Between 2014 and 2015, over thirty environmental activists in the Latino community were interviewed. The focus was the Western United States. Key points included:

The forward to the study was written by Marce Gutiérrez-Graudins, founder of Azul. Through the Madre Tierra project, she is working to bring Latino perspectives to the table on climate change policy in California. Her insights pointed to the frequent disconnect between on the ground actions and institutional organizations. Here’s my interview with Gutierrez-Graudins

You are active in engaging Latinos in a range of environmental campaigns. However, in your introduction to The Verde Paper, you state clearly that you are often the only “person of color” and “Spanish-speaking stakeholder” at the table in a predominately white conservation movement. How do you see as the best ways to shift this paradigm?

I work mainly in marine conservation, which is not a very diverse field. However, through my environmental justice work, I get to collaborate with a more diverse cohort. The issue is a systemic one, and so it needs a systemic approach — from non-profit to philanthropic leadership, people need to realize that business as usual has failed to meaningfully engage people of color. This doesn’t mean that they are not interested in conservation, but rather in the process. I feel like this is exactly what the paper spells out.

In the past several years, your work has grown to encompass linkages with other Latino activists who are pushing back against fracking, natural gas infrastructure, and the health consequences of air pollution. Latinos have a higher rate of cancer, asthma and other diseases as a result of toxic factory sitings. What do you see as the best steps to combat these issues?

Without trying to oversimplify, the idea is to work with neighbors and other parents to get informed, contact local elected officials with the problem, and ask for guidance. Also, when elected officials know that this is an issue of importance to their constituents, the idea would be that they look out for solutions and speak out against further siting of polluting industries, possibly even write new legislation if this would be the way forward.

A result of a recent poll showed that an overwhelming majority of Latino voters in California want action on climate change and renewable energy. (81 percent are worried about climate change and 79 percent are feeling the impacts.) How do you see this translating into on the ground voting patterns, both in the Presidential election and down the ballot? Will voters come out to specifically support this issue?

They have in California.  An example was Proposition 23 in 2010. The proposition, bankrolled mainly by oil companies, would have postponed California’s cap and trade program, therefore postponing the guidelines and carbon reduction plans related to it. Families concerned for their children’s health (particularly in California’s central valley which had an exponentially higher rate of asthma and cancer) organized and campaigned with local community-based organizations. The proposition was defeated. This worked because the organizing came from local organizations that they trusted and knew. Even in a mid-term election with lower turnout, against a very well funded opponent of clean air, Latinos in California literally came out to vote for clean air, and very importantly, they won.

Latino communities across the country face different problems, often related to their specific regional concerns. The commonality is in the disproportionate rate at which their health is impaired by Toxic Release Facilities (TRI), landfills, hazardous waste proximity, and indoor air pollution. What is your advice to parents about how to advocate for their children’s health?

A good first step is to contact their local health centers, who should have information related to the local issues. Making sure they are talking to neighbors with small children is vital to all keeping informed. It is also easier to do, and much more effective to approach authorities as a group. If there is an ongoing problem that authorities won’t solve or work on, I always tell people to contact their local media. Sometimes it does take a larger focus to get things moving along.

For those who don’t know where to find their hyper-local environmental groups, La Madre Tierra has built a resource link that lists community based groups working with Latinos through out the country.

conservation, featured, Green Movement, Latinos
Previous Post Latino veteran creates his own script for career success with help from FOX News Ailes Apprentice Program
Next PostThe world is about to be introduced to "Mexico's Bravest Man"