Is your state prepared for climate change? 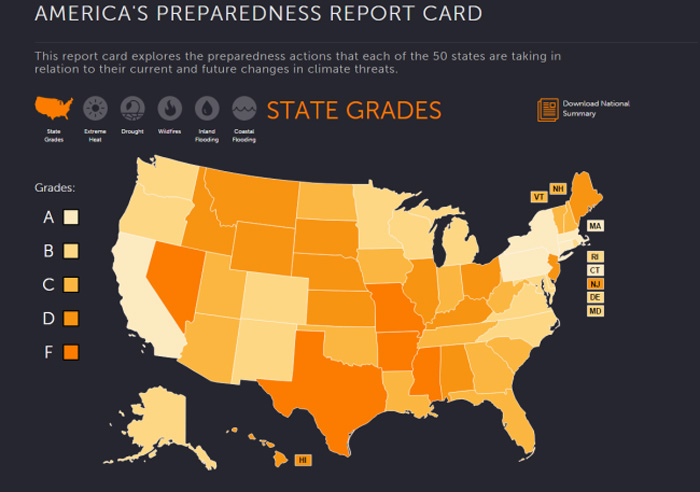 What if you had the power to save millions of lives, and billions of dollars, too? In the fantasy world, we look to superheroes to save us from catastrophes. In the real world, we’ve got some super powers of our own when it comes to dealing with disasters, so what are we waiting for? At Moms Clean Air Force, we know that a parent’s love is a true force of nature. And those of us who don’t have kids are equally invested in protecting our friends, families and larger communities from threats, foreseeable or not. We can harness all that energy to push for better outcomes in the wake of future disasters.

Millions of Americans have had their lives turned upside down in recent years by weather-related calamities, from fires to flooding, drought and deadly heatwaves. More of these extreme weather events are sure to come. As the States At Risk Project’s hot-off-the-press America’s Preparedness Report Card notes, “since the 1980’s, $1 billion disasters in the U.S. have nearly tripled, from fewer than three a year to more than eight, adjusted for inflation.”

That’s the bad news. The good news is that when we make disaster preparedness a priority, there’s a lot we can do to limit the lost lives and devastation these disasters bring. As the Report Card’s nifty infographics show, some states are doing a much better job than others. The Report Card evaluates all fifty states on how they’re addressing current and future weather-related threats in five categories: extreme heat, wildfires, drought, and flooding, both inland and coastal.

The States At Risk Project is a collaboration between the scientists at the non-profit Climate Central and the consultants at ICF International, whose mission is to help their clients find solutions to society’s most challenging issues. Together, they’ve given us a powerful tool to help us learn from the states that are leading the way.

It’s fascinating to see which states are being proactive on all these fronts and which ones are trying to bury their heads in the sands of their ever-eroding beaches. California, Florida and Texas face the greatest extreme weather threats of all the states, but their grades run the gamut from A to F, thanks to their wildly varying levels of willingness to tackle these problems.

California, the eternal early adopter, gets an A for setting the gold standard when it comes to dealing with all five threat categories. Texas, which faces four of the five threats, rates an overall ‘F’ for its apathy on all fronts. Florida earned an overall grade of C- but got an F in the category of coastal flooding preparedness, because the sunshine state has by far the highest population at risk of both inland and coastal flooding, and yet is doing only an average job of preparing for either occurrence.

But the Report Card does much more than just give some states A’s and others a mediocre or failing grade. It’s done our homework for us, too, highlighting the strategies that offer the best use of each state’s resources to mitigate, adapt to or in some cases even prevent climate disasters.

The Moms Clean Air Force team, with chapters in 18 states, is gratified that six of our states made the Report Card’s Top Ten for highest overall grade: California, New York, and Pennsylvania received A’s, and Maryland, North Carolina and Virginia all earned a B+. Michigan came close, earning a B.

And we’ll take the inclusion of four states where we have chapters on the Top Ten for worst overall grade as an incentive to redouble our efforts to foster more fruitful collaborations with folks in those states. Texas and Missouri got an F; Ohio and Montana, a D+. Other states where we’re active showed room for improvement, too: New Hampshire and Tennessee got a C; Florida and Indiana, a C-; New Jersey, a D+, Illinois a D.

Cheers to the States At Risk Project for giving us this goldmine of data and presenting it in such a user-friendly way. Now, whether your state got a good grade or bad, we all need to channel our inner Clark Kent, and trade the dunce caps for superhero capes. Don’t be shy! You don’t need a phone booth to change in when smartphones have made modesty (and pay phones) all but obsolete, anyway.

Moms may only be mere mortals, but we — and our partners, our families, our children, our friends — have the power to alter the outcomes of these apocalyptic scenarios. We can be heroes. And, with all due respect to David Bowie, not just for one day, but for every day, starting now.

Image via States At Risk