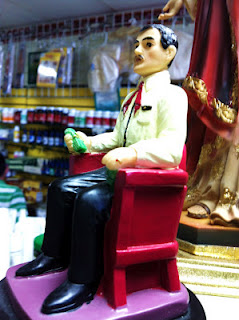 Saintliness and crime. Can they occur together?

Not usually, but when it comes to Jesús Malverde, the rule is broken. 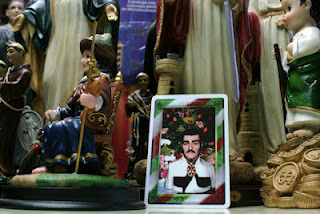 His image is found in popular altars – of course, without the approval of the Catholic Church. Worshippers, ranging from drug lords to poor farmers, have made his grave, located in the city of Culiacán in the Mexican state of Sinaloa, a sort of mecca for criminals and desperate people.

There is little historical data on Malverde, such that at times the line is blurred between reality and legend. That may be why nicknames like “Mexican Robin Hood,” “Angel of the Poor” and “Generous Bandit” convey more than any biographical information.

“It’s part of the traditions,” says Simón Navarro, owner of a natural products pharmacy in east Tulsa. “There are those who come looking for his image,” and others who seek more, given that there are products with the image of this “narco-saint” on items such as soap – for good luck.

According to Jungwon Park, author of an article about Malverde, he was a bandit in the late 19th and early 20th centuries. Says Park: “There have been many legends that tell his life story and his miracles, but his story has been viewed by some as pure myth because of the lack of substantial evidence.”

“Despite the doubts, according to the most popular and accepted version, this Robin Hood with a Mexican accent, was born in Sinaloa in about 1870. At some point he became a thief, hiding in the mountains of Culiacán and robbing those who had the most that could be shared among the neediest, and who in exchange granted him the protection of their silence. But he was betrayed and executed in 1909.”

The supposed episodes of Malverde’s kindness and social struggle took place within the autocratic regime of Porfirio Díaz, who ruled the country from 1876 until 1911. That period, labeled by some historians as the “Porfirian peace,” was a stage of progress and modernity, but it was also the beginning of the gap between social classes: a lot of poor and a few rich, very rich.

Perhaps because of these accidents of history, Malverde grew in popularity.

According to James Creechan, sociologist and professor at the Autonomous University of Sinaloa, Malverde is considered the patron saint of drug traffickers.

“The drug guys go to the shrine and ask for assistance and come back in big cars and with stacks of money to give thanks,” he said in an interview with The New York Times in 2008.

Despite these ties and fervor among drug lords, the most needy who know of the existence of Malverde identify with his heritage. The poor exist in invisibility, between darkness and drug violence; to the government, they don’t exist – there is nothing to lose.

So, why not ask such a kindly saint who even likes the bad guys?

In this way, Malverde is a multicultural amalgam and infinitely merciful. He is not exclusive, but he is for everyone, especially for those who are marginalized.

It is hard to imagine that the Catholic Church will set up an altar for Malverde. But what is a certainty is that his devotees will continue asking, praying and paying promises.

It may be because of favors received, or for his great physical resemblance to Mexican actor and singer Pedro Infante, or the simple fact that there is nothing, absolutely nothing to lose. 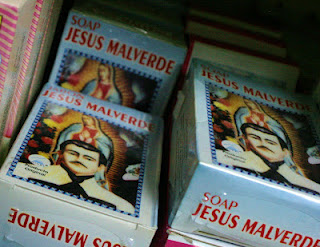 The image of this “bad saint” is enlivened with typical tunes that are an ode to violence and drug trafficking: the so-called “narcorrido,” a sort of folk song deeply rooted in the border between Mexico and the United States. One of these songs says:

I will sing a corrido [ballad] of a true story,
about a generous bandit who robbed where he wanted.
Jesus Malverde was a man who helped the poor,
that’s why he was protected when the law was after him

Videos of ballads about Malverde

Today before your cross I kneel
Oh, Malverde my Lord I ask for mercy and that you heal my pain
You who live in glory
And who are very close to God
Listen to the sufferings of this humble sinner
Oh! Miraculous Malverde
Oh! Malverde my Lord
grant me this favor and fill my soul with joy
Give me health, Lord
Give me rest
Give me well-being
And I will be happy

The picture card of Malverde says that after making a personal request one must pray three Lord’s Prayers and three Hail Marys. Lastly, one lights two candles.

In the television series CSI on the CBS network, an image of Malverde appeared in an episode broadcast in 2008.

An image of Malverde appears in the film “A Man Apart.”

There is a play, “Rider of Divine Providence,” written by Oscar Liera, which discusses Malverde’s alleged miracles.

featured
Previous Post It seems harder today to make a college degree pay off
Next PostSpotlight Nonprofit: Using the art of crochet to lift lives out of poverty

It seems harder today to make a college degree pay off
Comment
Spotlight Nonprofit: Using the art of crochet to lift lives out of poverty