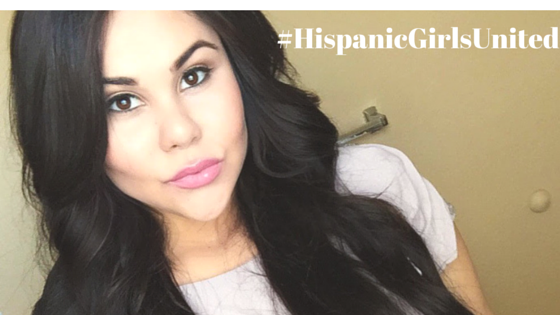 When Joyce Santeliz started #HispanicGirlsUnited, she never imagined that it would spread as quickly as it did. The story of her hashtag has been written about widely from the Huffington Post and BuzzFeed to MIC.com and the Latin Post.

Within only a few days of her first tweet, #HispanicGirlsUnited trended to #2 on Twitter. In a climate in which the political and buying power of Latinos is mounting, Joyce’s Twitter campaign is timely. Tweets with #HispanicGirlsUnited combat stereotypes, giving us a glimpse into the diversity of Hispanics in the U.S., while also uniting them through their shared experiences of struggle and perseverance.

BeVisible recently sat down with Joyce to ask about what motivated #HispanicGirlsUnited and how she has observed the impact of her incredible Twitter campaign. Her story will inspire you.

Joyce is a 20-year-old, first-generation Salvadoran-American living in Las Vegas, Nevada, who describes herself as a “debater,” and who loves to voice her opinion. Like many millennials who have harnessed the power of the internet to reach thousands of people, Joyce unwittingly sparked a social movement on social media.

For millennials, the blending of the social and political spheres is seamless. Social media has allowed us to be transparent about our values and promote the messages and causes that we stand behind. We live in a world where the ability to quickly reach thousands of people is the norm, not the exception; where activism is starting and being fueled by social media.

I asked Joyce if she saw her work on Twitter as a form of activism. She responded that she had never tried to start something like this before. She had originally seen #HowItFeelstoBeABlackGirl, and was inspired to create a similar hashtag to share her experiences as a Hispanic girl.

“I didn’t really see my tweet as activism, I just saw it as a support for one another. But I guess it’s both. Just a few little tweets made such a big difference for so many people.”

When asked what stereotypes she was hoping to combat through her campaign, Joyce said, “People think we [Hispanics/Latinos] are ‘less than’. Yes, we are educated, and we can speak English and Spanish! We aren’t strange creatures. We are just as American as everyone else whether we are born in the U.S. or immigrated here.”

I asked her if there any tweets that really stood out to her. She said that there were several that said something like, “#HispanicGirlsUnited because I’ve stayed up late and woken up early to take care of my younger brother or sister because my parents had to go to work to make a living.” And “#HispanicGirlsUnited because I was moved back a grade because I didn’t know English well.”

Joyce said that she resonated with both of these tweets, and herself had been moved back from first grade to kindergarten because she didn’t know English well, even when she was excelling in everything else.

Joyce also hopes that her Twitter campaign will help to combat the oversexualization of Latinas. She said, “All we see on TV are sexy forms of Latinas and Latinas as maids. They don’t put us in a normal image like any other woman. This needs to change.”

I asked Joyce if there was anything that surprised her about her campaign. She said that there were some discriminatory tweets where people said things like, “Go back to your home country”, and “Go wash some dishes”, but despite this harassment, there were overwhelmingly more empowering tweets than negative ones.

What’s next for Joyce? She has her eyes set on becoming a photographer, and hopes to start a blog soon where she can post more about her life, and continue to make her thoughts and opinions known! She is thrilled that her hashtag united so many people, and can’t wait to see what’s next.

“Always persevere. Our parents taught us to seek greater things in life. We grew up knowing that life isn’t always easy, but when you work hard for the people and the things you love, it’s the greatest thing. Hard work brings great things. Our parents taught us independence, to never back down, and to never let anyone step all over you. They gave us the future that they only longed for growing up. Always stand up for yourself and never be ashamed of who you are. You are great, you are everything, and you are loved.”

Joyce’s twitter campaign #HispanicGirlsUnited is among others like #LatinasRepresent which is seeking to create a new vision for Latinas in public service and politics, and #LatinasSpeak which is raising awareness against stereotypes and promoting the empowerment of Latinas. #MillennialLatinas are making themselves known.

We are not the stereotype. We are diverse, intelligent, and are here to have our voices heard!