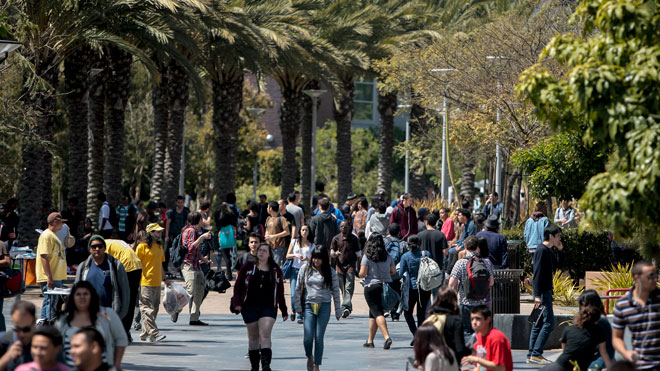 Higher numbers of Latinos are enrolling in college than ever before — even as overall college enrollment in the United States is falling.

The findings were released by the U.S. Census Bureau on Tuesday. The number of Hispanics enrolling in college increased to 3.4 million in 2012, an increase of 15 percent over the previous year, Reuters reported. Hispanic students now make up 17 percent of college students.

Meanwhile, overall college enrollment fell by about 2.3 percent, to 19.9 million. Much of the decline came from older students.

The Pew Research Center details other recent positive news contained in the report. The Hispanic high school dropout rate is falling. In 2012, about 15 percent of Hispanics ages 18 to 24 had not completed high school. The percentage in 2000 was significantly higher, at 32 percent.

“Overall, the Hispanic dropout rate is falling more quickly than any other racial or ethnic group, resulting in a closing of the gap between Hispanics and blacks, white non-Hispanics and Asians,” Pew noted.

The Census Bureau report found that 49 percent of Hispanic high school graduates ages 18 to 24 are enrolled in college, compared with 47 percent of whites. Immigrant students and children of immigrants made up about 32 percent of college students.

More students are in the pipeline. About 24 percent of elementary school students in the U.S. are Hispanic.

The news is encouraging, but there still is a long way to go to close the education gap, demonstrated by another recent report by Pew focusing on the low college attainment rates of Latinos. The college attainment levels vary widely depending on which state you reside in.

An analysis of Census data by the Pew Research Center provides a state-by-state breakdown on the bachelor’s degree attainment rates of Latinos ages 25 and older in 2011. The national average for all Hispanics was 13.4 percent.

On the high end of the list was the District of Columbia (36.2 percent). The low end was Nevada (8.1 percent). Many of the most heavily Hispanic states fall under the national average. They include California (10.7 percent) and Texas (12.0 percent). Florida was an exception (20.4 percent).

The source of data was the U.S. Census Bureau’s 2011 American Community Survey data. It’s important to note that these number include immigrants with low levels of education from their home countries.

As you may recall, last May Pew released a study showing that a higher percentage of Hispanic high school graduates in the Class of 2012 (69 percent) enrolled in college than white graduates (67 percent).

Guest Voz: Texas — prime example of a state government failing its people and derailing its future, thanks to one man
Comment
Costa Rica on alert for organ trafficking