The National Center for Education Statistics has released a new report showing a huge increase in Latino high school graduation rates. The rate increased to 71.4% in 2010, up from 61.4% in 2006. 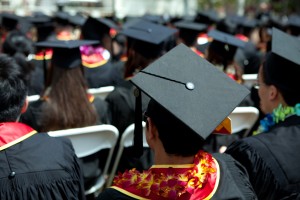 The report shows more positive outcomes for all students. About 78.2% of students graduated on time within four years in 2010. The report also breaks out data by state.

Jack Buckley, director of the NCES, told The Huffington Post that the last time the country had a similarly high graduation rate was in 1968. The NCES put out its first such report in 2005, but made estimates dating back to the 1970s.

“This is the highest estimated rate of on-time graduation,” Buckley said.

Despite those gains, U.S. Secretary of Education Arne Duncan, said while there has been much progress, still more is needed.

“…Our high school dropout rate is still unsustainably high for a knowledge-based economy and still unacceptably high in our African-American, Latino and Native American communities,” he said in a statement.

Nevada reported the worst rate for Latinos in 2010, at 47.2%. Meanwhile among the states with the nation’s two largest Latino populations, Texas reported a significantly higher graduation rate than California. Texas reported 77.4%, and California, 71.7%.