While Latino children make up the largest racial or ethnic group enrolled in New York City’s public elementary schools, they occupy the smallest percentage of the gifted and talented program’s enrollment. 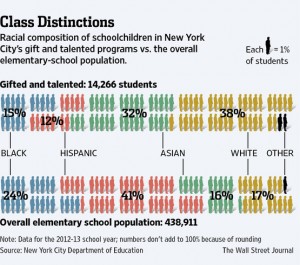 Data obtained by The Wall Street Journal shows that Latino children are dramatically underrepresented in the program, making up just 12% of the city’s 14,266 gifted elementary school students this school year. Yet Latino children make up about 41% of the 489,911 elementary students.

The Journal reports that white and Asian children make up about 70% of students enrolled in the city’s 110 gifted and talented elementary programs. Children who are Latino, black or of other races make up about 29%. The newspaper asked the city’s chief academic officer, Shael Polakow-Suransky, whether he thought the racial imblance was a problem.

The newspaper is shining a light on the disparity, as the city prepares to change the exam it uses to screen for gifted children. The new test will be the Naglieri Nonverbal Ability Test, relying on abstract thinking.

A large part of the racial and ethnic disparity is that low-income, minority parents don’t know about the gifted program or test. Nor do they have the resources to prepare for it, as tutoring can be expensive. Critics say that the city should not solely rely on standardized test for admission to the program.

According to the Journal, only about 13% (39,300) of children kindergarten through third grade were even tested for gifted programs in 2012, and the city does not believe in screening all students.

In a follow-up story, the Journal reported that the school system’s Chancellor ,Dennis Walcott, said the low enrollment of black and Hispanic children “is what it is.”

“It’s unfair to [black and Hispanic students] if they just need to be put in a program to satisfy some type of percentage,” he told the newspaper.

Last September, the NAACP filed a complaint with the U.S. Department of Education (with the support of Latino Justice PRLDEF), saying that the city’s magnet admission exam discriminated against black and Latino students.

At the time, Reuters reported that in the 2011-12 school year Latinos only made up about 2.4% of Stuyvesant students, and black students made up 1.2 percent.

Admissions standards for gifted programs can vary widely. Make sure to compare your school district’s racial and ethnic composition against the gifted population. Does your district use an exam, or include other factors?