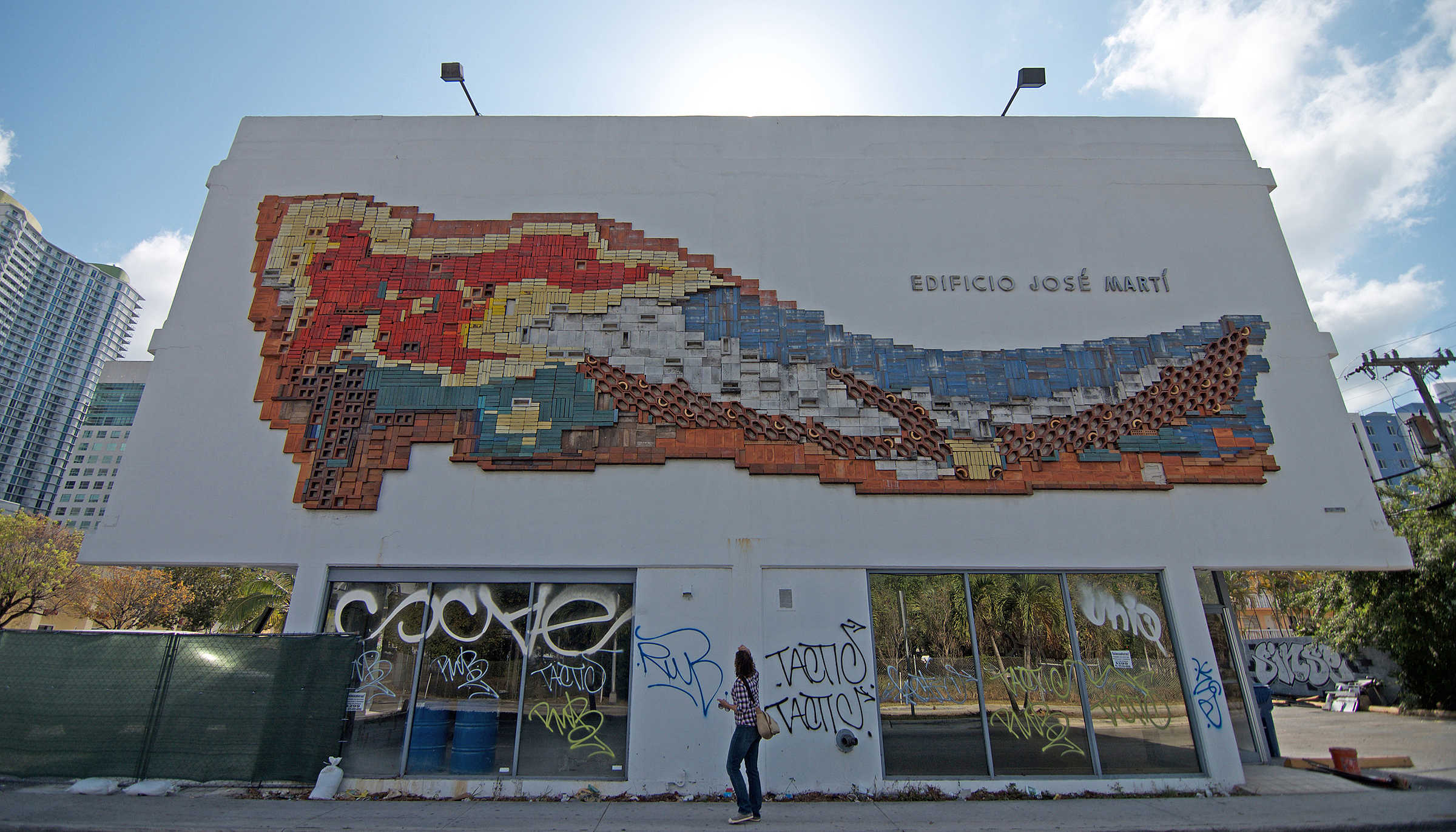 When I Google “Edificio Jose Marti,” the all-knowing search engine generates few links related to the building I am researching: a building database with little more than the address listed, a 2008 “Miami New Times” article about a party held there, a few Spanish sites referencing the eponymous Cuban national hero. Only three of the first 25 pictures under the “Images” tab depict the white, Modernist, three-story structure that sits at 801 SW Third Avenue in the Little Havana neighborhood of Miami. And even more difficult to locate are descriptions of the unmistakable mural by which the building, Edificio Jose Marti, is identified.

With 2,381 individual components varying from clay to brick to cinder blocks painted in shades of red, yellow, blue, and white, the asymmetrically designed artwork has created much debate about what the mural actually depicts.

“We’ve heard that it is an abstract of a Cuban flag,” says Neli Santamarina, a longtime Miami resident, preservationist, and former tenant of the building. “We’ve also heard that it is the map of the Bay of Pigs region in Cuba.”

When Santamarina first opened her local eatery, Tina y Café, in Edificio Jose Marti in 2005, she hosted an event for people to vote on what they thought the mural portrayed. But, eleven years later (and with many questions about the mural’s history still remaining), Santamarina was not able to renew her lease when the building was sold to the furniture company, Modani, which now plans to remove the mural.

“It means a lot to this city,” explains art conservator Rosa Lowinger of RLA Conservation. “Everybody recognizes that mural; you name anyone [and] they’ve seen it because you can’t miss it when you get on and off the expressway.”

With Lowinger’s help, Santamarina is looking for a new home and plans to help save the 50+ year-old mysterious mural.

“At that time, it was a big addition to that neighborhood,” explains Paul George, HistoryMiami Museum historian, local professor, and Miami native. “The neighborhood wasn’t receiving those kinds of additions [at the time]. Both sides of 8th Street [where the building is] were still a sprinkling of residential buildings and some small businesses.”

The lower-to-middle class neighborhood remained dominated by vernacular architecture and shotgun-style homes until the early 2000s, and has since undergone vast development. “It’s one of the most rapidly changing areas that I know of in the eastern United States,” says George.

The mural itself likely went up around the same time as the building; Santamarina attributes it to unknown artist and ceramicist, Fran Williamson, whose signature she discovered under peeling paint. But the discovery ends there. Even George, one of Miami’s foremost historians—who made deliveries for an adjacent grocery store and remembers the building as it was being constructed—has never heard of the artist nor has located an online record or trail.

Though Santamarina was forced to leave the space just a few weeks ago, she has not given up on the colorful artwork. “We don’t have a lot of history,” Santamarina explains, because “Miami is a very young town, but the little history that we do have, we continue to erase.”

Just last year, a historic Art Deco mural from the former Versailles Hotel was removed to make way for new construction of hotel and condominium towers. In 2014, one of Miami’s oldest bars, Tobacco Road, closed and the iconic signage that had graced the exterior wall for part of its 112 years was removed. Development in eastern Little Havana continues to boom, causing some concern among locals who worry the neighborhood will lose its history and culture to newer more expensive buildings.Unfortunately, the future of Edificio Jose Marti remains unclear. After a complete appraisal and documentation of the mural, Lowinger estimates the cost of removal and safe packaging could be anywhere from $30,000-$50,000. Multiple pallets of the individually wrapped components would then need to be stored until a new home for the mural is found and restoration could begin.

Whether it is because the community knows little about its meaning or its artist—or merely because of the location—few have rallied around the building or its ornamentation.

“It’s not like [the mural is] in a park and you stand there and look at it,” says George. “It’s just in an incredibly busy automobile hub and I think to some degree it’s been ignored and so it’s probably been underappreciated for that reason.”

While the current owners are open to a contingency plan that would both save the mural and allow them to continue their plans to repurpose the building, Santamarina and Lowinger continue to shoulder this fight alone.

“If at least we can get it safely brought down and it can go somewhere else, we won’t lose yet another piece of our heritage,” says Lowinger.

Katharine Keane is a former editorial assistant at Preservation Magazine. She enjoys getting lost in new cities, reading the plaques at museums, and discovering the next great restaurant.

Crowdfunding: Creating a library for the children of Vilcabamba, Loja, Ecuador
Comment
CDC study finds Latinas more likely to die at the hands of jealous lovers