Latina Lista: News from the Latinx perspective > Columns & Features > BlogBeat > In Our Modern World, Traditional Indigenous Knowledge is More Important Than Ever

In Our Modern World, Traditional Indigenous Knowledge is More Important Than Ever 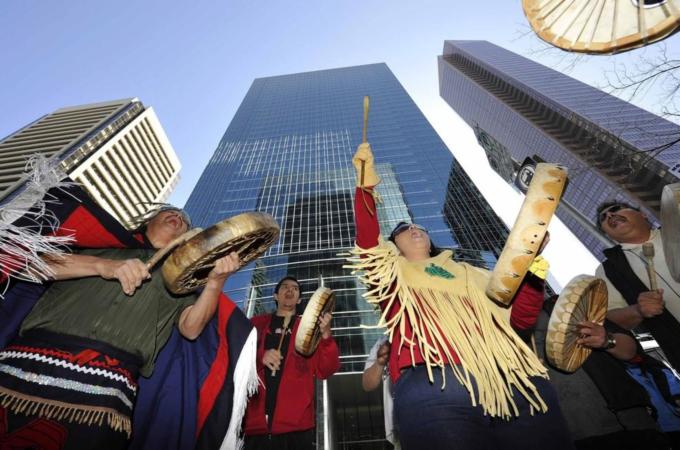 Clearly the way we’re running things on earth is not headed in a good direction – the climate is changing, we’re nearing a drinking water crisis, and our food system is not sustainable. Juxtaposed with extreme poverty in much of the world, we see that the world’s three richest men have more wealth than the world’s 47 poorest countries combined.

But we haven’t given up hope yet.

There’s a solution to many of our biggest problems. It may require a new way of thinking for most of us, but really, it’s a system of knowledge that is thousands of years old.

We believe that traditional Indigenous knowledge has a lot to teach us, that an economy of ENOUGHNESS is not a relic, but is the best way to preserve the world for future generations.

Does that sound a little too abstract for you? Allow us to provide some specific examples of how traditional Indigenous knowledge is being applied in very modern ways.

Health – Despite often being mischaracterized as “witchcraft” or “sorcery” and even banned from official practice in some countries, traditional medicine has survived for thousands of years.

Traditional medicine is more than just a medical system – it is a holistic doctrine that places physical illness in a larger network of mental and emotional wellbeing and community health. Today, many doctors realize that even the symbolic aspects of certain healing ceremonies and practices can have an important psychological impact on patients that contributes to healing.

According to the World Health Organization, 30% of the world’s population does not have regular access to basic medicines, and in the poorest countries of Africa and Asia this number is often greater than 50%. In Ghana and Zambia, there is one Western-trained doctor for every 20,000 people, whereas there is one traditional healer for every 200 people.

Many common cures and medicines that we use today were initially discovered by Indigenous peoples long ago. Examples include:

– The cinconcha tree produces quinine, which was used by the Quecha of Peru and Bolivia to treat fevers and muscle spasms. Quinine was one of the first known antidotes to malaria, and was widely used in treating malaria from the 1600s until the 1940s. Quinine is also used to treat arthritis and lupus.

– Long before it became a trendy weight loss pill, the San of southern Africa used the hoodia cactus to stave off hunger in times of low food.

– Tumeric, whose active ingredient curcumin is used to treat a variety of chronic illness including cancer, Alzheimer’s disease, diabetes, and arthritics, has been used for healing wounds in India as part of the Ayurvedic traditional health system, dating back thousands of years.

– Argoyapacha, which can be used to increase energy, has been used by the Kaani people of southern India for centuries to suppress fatigue and stress. It is also an Ayurvedic treatment for snake bites.

Agriculture – Indigenous practices of agriculture focus on growing necessary crops in a holistic and sustainable manner – far different from the capitalist system that emphasizes profit above health and sustainability.

Many such systems focus on agricultural diversity – planting more than one variety of crop on the same land – which reduces risks associated with natural variability and weather, unlike monoculture farming. According to the UN Intergovernmental Platform on Biodiversity and Ecosystem Services, some examples of successful traditional agricultural practices that continue today include:

– Rice-fish co-culturing has been used in south China for over 1,200 years. Recently designated a “globally-important agricultural heritage system’ by the UN Food and Agriculture Organization, this practice comingles fish with rice paddies.

While the fish eat and remove harmful rice pests, the rice helps to regulate the fish’s environment. This results in both healthier rice and fish populations, and has been shown to reduce the need for pesticides by 68% and chemical fertilizer by 24%.

– Traditional farmers in Tanzania plant their maize, beans, and wheat around pits surrounded by ridges. During the rainy season, these pits act as reservoirs to prevent surface runoff, thus protecting the crops and also preserving the quality of the soil for future planting.

– Farmers in Northern Thailand employ a complex system of landscaping that includes home gardens, grazing land for cattle, sacred areas, rice paddies, and a tree line that serves as a forest break and wildlife path. In this way, communities are able to provide for all of their needs without destructing the land or disturbing local wildlife.

– Rainwater harvesting, a traditional practice which is thought to be at least 6,500 years old, was revived in the Rajasthan state of India in 1970 as a response to severe drought and depletion of drinking water, and has been improving agriculture ever since.

However, Indigenous peoples have been living in harmony with their animal neighbors since time immemorial, and studies have shown that areas under traditional Indigenous stewardship have healthier wildlife populations than those under modern conservation.

As the world’s ecosystems are facing the harms of climate change, paying attention to these time-proven methods is more important than ever. Some examples of how Indigenous practices can improve wildlife conservation include:

– Traditional fire management has been practice by Indigenous peoples cross Australia, Indonesia, Japan, Venezuela, and Mexico. This practice involves periodically sparking controlled burns to create a patchwork of burnt sections across a forest or plains.

This prevents the massive, rolling wildfires that we now often hear about in the news, and also promotes new forest growth and soil improvement, as ash from the controlled burns enhances soil quality and facilitates regeneration.

Now, in Australia, Aboriginals can even use controlled burning to earn carbon credits, both enhancing the ecosystem and providing new employment opportunities

– Locally-managed marine areas (LMMAs) have proven to be one of the most effective ways to combat ecosystem destruction in the Pacific islands. In an LMMA, coastal communities are able to enact policies and guideline to protect marine animals and reefs.

Because the Indigenous communities are the ones who interact with the seas on a daily basis and have a shared history of the area, they are able to decide on the most effective protective measures.

These measures often include species-specific prohibitions on hunting, seasonal and area closures to create networks of wildlife refuges, gear restrictions, and behavioral prohibitions.

These are often complemented by a community’s own totemic food restrictions and also allows the community to maintain sacred sites and tabu areas.

– An amazing example of the possible cooperation between modern technology and traditional knowledge is the use of animal herd management currently underway in the Arctic. While scientists are using remote satellite sensing, and modeling to track the patterns and movements of herd animals, they are also consulting with Sami and Nenet reindeer herders, who are more observant on complex changes in the environment and within herds.

Cultural and Linguistic– This one is a little less quantitative, but just as important. Indigenous peoples have rich, deep cultures and traditions, and allowing these to degenerate is doing a great disservice to our collective humanity.

As Gaston Donnat Bappa, a chief from the Bambini region of Cameroon, explains, the world is “enriched by its Indigenous peoples, its oral culture perpetuated by the storytellers, its proverbs, myths and legends, its totems, sorcerers and patriarchs, and by its connections with the dead through funerary ceremonies and funerals. It is enriched by its animism at the source of its specific spirituality…by its unalterable, inexhaustible arts and crafts, its folklore, songs, dances, its communitarianism, and by the communicative ‘joie de vivre’ which characterises its people.”

Indigenous languages play an integral part in facilitating all of the above-mentioned issues, and Indigenous languages are often able to convey subtleties and nuances about nature, the weather, healing properties of plants, and human behavior that dominant languages do not.

Still looking for some hard facts?

Join us in our ENOUGHNESS campaign. First Peoples works directly with Indigenous communities around the world. Your donation will provide grants to support sustainable development projects that can make the world a better place for us all.