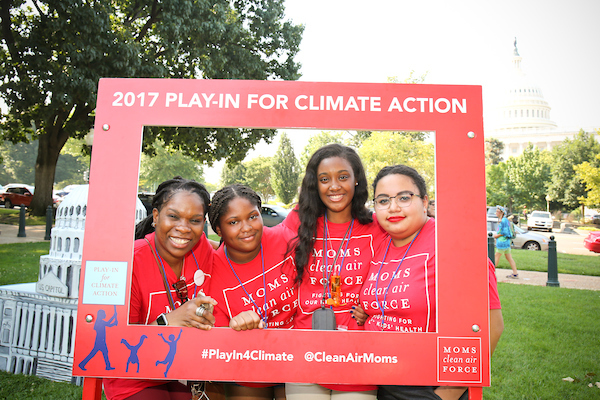 Our train into DC from Philadelphia was 90 minutes late for the annual Play-In for Climate Action. As we waited for the light to change at a crosswalk we noticed two men in suits standing beside us.

“I think that might be Tim Kaine,” I whispered to my friend.
“I think so too.”
“Say something.”
“No, you say something.”
“Um, are you Tim Kaine?”
“Yes I am! Who are you and what brings you to Washington?”
“We are here with Moms Clean Air Force to talk about protecting our children’s health!”

That’s the opportunity Moms Clean Air Force gives parents from across the country. Of course, this meeting was by chance. But the dozens of meetings scheduled on the Hill that day would be rare and momentous opportunities to sit down with elected officials to ask  them to support the strongest possible health protections against climate change for our families.

On July 13, 2017, more than 500 parents and children from across the country came together in Washington, DC for a Play-In for Climate Action. This was the fourth – and likely the most imperative – year of the family-friendly protest against air pollution, climate change, and President Trump’s EPA budget cuts.

I met parents who had traveled with their children from as far as Alaska for the opportunity to share their personal message (making my slightly delayed train ride seem like actual child’s play).

Against a backdrop of children playing with parachutes and large blocks depicting “things we love that are threatened by climate change” – under a broiling 100 degree heat index, event speakers included congressional leaders from both side of the aisle: Senator Jeff Merkley (D-OR); Senator Sheldon Whitehouse (D-RI); and Representative Brian Fitzpatrick, (R-PA 8th).

Having Representative Fitzpatrick speak underlined the fact that protections for children’s health should not be a partisan issue. According to a new Moms Clean Air Force survey, the majority of U.S. moms and grandmothers – regardless of background — are concerned about climate and air pollution.

Victoria Barrett, one of the plaintiffs from Our Children’s Trust, a landmark youth lawsuit suing the government for a “stable climate and healthy atmosphere”

Megan Boone, mom and lead actress of the Blacklist.

After the Play-In, we broke into small groups for scheduled meetings with members of Congress from all 50 states.

More than 300 parents and children had the opportunity to personally share their stories with over one hundred members of Congress and their staffs. We had the opportunity to speak directly to senators Jack Reed (RI), Lamar Alexander (TN), Tom Carper (DE), Maggie Hassan (MA), Roy Blunt (MO), and Catherine Cortez Masto (NV) to ask about their plans to combat climate change, reduce air pollution, and prevent cuts to the vital protections provided by the EPA.

Later that day, the House of Representatives officially affirmed that climate change poses a direct threat to our national security. In a previous bipartisan vote in the House Armed Services Committee had included the following language in the National Defense Authorization Act: “Climate change is a direct threat to the national security of the United States and is impacting stability in areas of the world both where the United States Armed Forces are operating today, and where strategic implications for future conflict exist.”

We can take great pride and comfort knowing parents and our children were a part of that victory. Our vocal advocacy over the years has helped move the needle for bipartisan triumph in the House, as representatives of both parties rejected a climate denial stance pushed by some leaders of the current administration.

We plan to return to the Hill next year in even greater numbers to share our non-partisan and universal message: We  harness the strength of mother love to fight back against polluters because there is nothing more important than our children’s health.

(Editor’s Note: Latina Lista was a partner for the Play-in Climate Action event.)