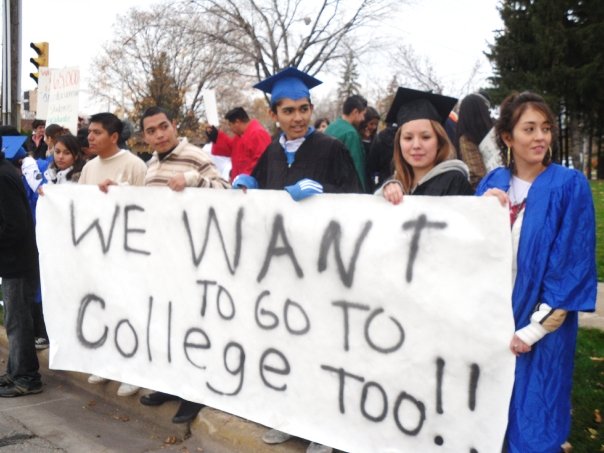 New Jersey is moving closer to passing legislation that would give undocumented immigrants brought to the United States as children the ability to pay in-state tuition and receive financial aid at state colleges and universities.

On Thursday, a state Senate committee voted to approve the legislation, sending it to a full vote next week.

The Star-Ledger reported that undocumented youth who have attended New Jersey high schools for at least three years and graduated would be eligible. To qualify for the benefit, individuals would have to sign affidavits saying they will work on seeking legal status.

One big piece of the proposed legislation that distinguishes it from similar laws in other states is that it would offer state financial aid to the undocumented students. Undocumented immigrants are not eligible for federal aid, which makes it difficult for many to attend college even with in-state tuition rates.

NorthJersey.com reported that according to the state’s Office of Legislative Services, allowing undocumented immigrants access to tuition assistance grants and scholarships would cost up to $5 million more annually.

NJ.com reported that Giancarlo Tello, 23, would benefit from the bill. He is an undocumented immigrant who moved to the United Stated from Peru when he was 6 years old. He attended Rutgers University but left school because he could not afford the out-of-state tuition.

“If you consider me a fellow resident of New Jersey, if you believe I deserve an education, a chance at the future, then I urge you all to vote yes on this bill,” he told the committee before they approved it by an 8-3 vote.

A letter from the Federation for American Immigration Reform, known as FAIR, argued that granting in-state tuition would strain an already tight state budget.

“Many New Jersey schools, colleges and universities are experiencing severe budget shortages as a result of the weakened economy and the state debt crisis,” the letter said.

According to a report released in August by the Brookings Institution, the federal government received 14,273 applications from undocumented youth living in New Jersey for the deferred action for childhood arrivals (DACA) program as of March 22, 2013. About 58.5 percent had been approved.

The deferred action program is meant to offer temporary legal status to young people, often referred to as “Dreamers,” brought into the country illegally as children. They have to meet requirements that include entering the country before age 16. The New Jersey numbers show there are plenty of potential students who would benefit from in-state tuition rates.

When I was working as an education reporter in Texas, I occasionally submitted freedom of information requests to the state requesting information on how many students were benefitting from the in-state tuition for undocumented immigrants law, how many were attending each college and university, and how much state financial aid they received.

Texas was the first state in the country to create an in-state tuition law. Other states with similar laws include California, Utah, New York, Washington, Illinois, Kansas, New Mexico, Nebraska, Maryland and Connecticut, among others.

The information about the numbers of undocumented students attending Texas colleges and universities helped better inform my reporting, and it can be useful background in your articles about undocumented young people.

If your state does not have such a law, have you asked undocumented high school students how being denied in-state tuition impacts their educational goals?