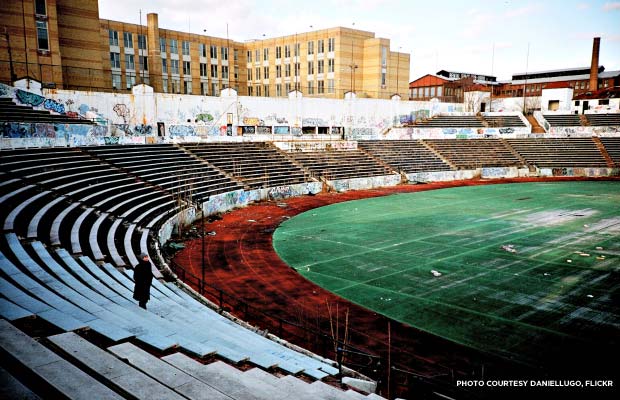 Years before Jackie Robinson stepped across the white lines and onto Ebbets Field to make history as major league baseball’s integration pioneer, decades before Roberto Clemente displayed his hitting prowess, graceful fielding, and powerful arm on North American baseball diamonds, and well before U.S. baseball fans became acquainted with the high-leg kick of Juan Marichal, the pitching gyrations of Luis Tiant, the prodigious home runs of Orlando Cepeda, other amazing performances of Big Papi David Ortiz, Pedro Martinez, and Manny Ramirez, black baseball fans congregated on Saturdays to watch the Negro League’s premier talent at Hinchliffe Stadium in Paterson, N.J. — a historic space where African-American and Latino fans watched some of their own perform during the era of segregated baseball.

The stadium provided the backdrop for some of the initial performances of the first wave of Dominican players to star in U.S. professional baseball. For example, speedy Juan “Tetelo” Vargas roamed its outfield as a member of the Negro Leagues New York Cubans team, while Horacio “Rabbit” Martinez, the first slick-fielding shortstop from the Dominican Republic (DR) to emerge as an all-star in the States, took his turns in the Hinchliffe infield.

U.S. baseball fans are perhaps as unfamiliar with Martinez’s significance to baseball history as they are with that of Hinchliffe Stadium. Both Martinez and Hinchliffe became part of the U.S. professional baseball scene in the early 1930s through their involvement in the Negro Leagues.

From 1933 to 1950, Alex Pompez’s New York Cubans squad regularly played games at Hinchliffe against other Negro League teams and local semi-professional clubs. Pompez’s Cubans were not only Cuban, however. The team’s roster comprised Latino players from across the Americas as well as African-American players. Notably, the Cubans team was the first to feature Dominican players like Vargas and Martinez on either side of baseball’s racial divide.

Martinez’s glove work drew favorable comparisons to the major leaguer Walter “Rabbit“ Maranville, and even garnered interest from the Washington Senators during organized baseball’s segregated era. The problem was that Martinez was deemed too racially ambiguous — that is to say, too close to what North Americans might deem as black to sneak past the guardians of major league baseball’s color line.

Instead, he made his initial mark in the Negro Leagues where he appeared in eight East-West Classic games. But he’d leave his most indelible impression on the major leagues off the field after the launch of integration.

Retiring from baseball in 1947, Martinez returned to the Dominican Republic and a few years later was hired by Alex Pompez, who had become a scout for the New York Giants baseball organization. Together the two brought Juan Marichal, the Alou brothers (Felipe, Jesus, and Mateo), and Manny Mota into the Giants’ fold — and, in doing so, constructed the initial talent pipeline from the D.R. to the majors.

Much like these men’s contribution to the transformation of America’s game, the story of Hinchliffe Stadium’s place within baseball history was lost into the shadows of major league baseball and its “great experiment” of racial integration.

Only the most knowledgeable baseball fans know that the New York Cubans, led by the pitching of Luis “Lefty” Tiant and the hitting of Orestes Minoso (before he became “Minnie”), won the 1947 Negro League World Series and regularly played games at Hinchliffe. Probably even fewer know that future Hall of Famers Monte Irvin and Larry Doby took some of their first professional swings at the stadium.

Thankfully, Hinchliffe didn’t suffer quite the same fate as other parks that once hosted Negro League Games. Greenlee Field in Pittsburgh and Dyckman Oval in Manhattan were both demolished to give way to parking lots and eventually housing projects.

Bigger ballparks such as Ebbets Field and the Polo Grounds met similar ends.

Still, Hinchliffe fell into disrepair over the years, and it faded from the popular memory of many fans and Paterson residents. In fact, having spent part of my childhood in Paterson in the 1970s, I remember the stadium’s remains only as part of the backdrop to the annual Fourth of July fireworks over the area’s waterfalls.

But now I, like many others, have come to a late appreciation of Hinchliffe’s historic role. The stadium stands today as a National Treasure.

Rehabilitating it into a multi-use facility would pay a fitting tribute to the resilience of those who once roamed its grounds wearing the uniforms of the Cubans, Black Yankees, Newark Eagles, and other Negro League clubs.