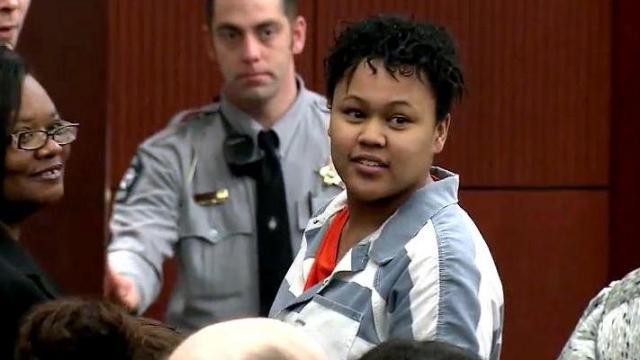 Did a foster-care teen need to be arrested by school police this month for alleged battery on a school bus? And then jailed for more than two weeks with adults long after a judge ordered her released?

The questions swirling around Selina Garcia, 17, of Raleigh, N.C. are part of a broader national debate over treatment of foster kids and the role of school police.

Garcia is still confined to an adult jail because no one from the Wake County, N.C., social services department has come to get her. She was arrested on March 7 by a school resource officer after allegedly striking another student on a bus during an altercation. A judge freed her on March 10 pending a court appearance scheduled for Thursday.

Part of the problem is that Garcia is both an adult and a minor in North Carolina. Once they’re 16, youths in the state are put automatically into the adult legal system if charged with crimes, including misdemeanors.

A 17-year-old, however, is still a minor under the state’s social services system. As a foster child, Garcia can only be released from jail and into the custody of the county, which is her legal guardian.

The twisted case exemplifies a systemic failure on the part of adults who are tasked with helping foster children — some of society’s most vulnerable kids — as well as an urgent need to review the role of school police in Wake County, according to Jennifer Story, an attorney with Legal Aid of North Carolina’s Advocates for Children’s Services.

“You cannot use jail as a boarding house for foster children,” said Story, who has been representing Garcia in efforts to obtain individual learning services for the teen from the Wake County School District.

Story also said that Garcia’s arrest by school police — a discretionary act on the part of an officer — illustrates the “unintended consequences” of funneling students into a legal system for incidents that might be better handled by school staff.

Garcia is being held with adults accused of a range of crimes, and the jail is an unsavory environment for a girl who has struggled since a small child with abuse, Story said.

Spokeswoman Sarah Williamson-Baker said the county cannot give out information about individual clients. In a statement, she said: “When a child in our custody is arrested, we assess the individual circumstances and whether it is safe and appropriate for the child to return to the previous placement. If not, we attempt to secure a new placement and supporting services that meet the child’s needs for treatment and are consistent with the safety of the child and the public.”

Stella Shelton, interim chief of communications for the Wake County School District, also said that she can’t discuss, due to privacy restrictions, a student’s case. She said the district, like other districts nationally, grapples with how to handle disruptions on campus.

“I’d have to leave that to the school resource officer’s judgment,” Shelton said, commenting on whether it was appropriate to have Garcia arrested for an incident on a school bus.

In January, Legal Aid of North Carolina and other groups filed a civil rights complaint against the Wake County School District and a number of law-enforcement agencies that supply officers to campuses there. The district has been disproportionately suspending ethnic minority students for minor misbehavior and referring such students to law enforcement, alleges the complaint filed with the U.S. Department of Justice’s Educational Opportunities Section of the Civil Rights Division.

Garcia, who is black and Latina, is a high school senior who suffered years of abuse as a small child in another state, according to Story. The girl was placed with a family member in North Carolina. She said Garcia wants to disclose what has happened to her; fellow students have rallied to her defense and appealed to the county’s Board of Education this month to help free her, as local TV and other media have reported.

A couple of years ago Garcia entered the Wake County foster-care system and has been transferred from group homes to individual homes and among three different high schools in less than two years, Story said.

Garcia gets no counseling at school, Story said. And since January, Story said, the teen has been cut off from the counseling she was previously receiving as a foster child because she was placed in an individual home that’s far from town and has been provided no transportation.

That’s been tough on the teen because she had finally built some trust with the counselor, Story said.

On March 7, Garcia got into an altercation with another girl on a school bus. Story says Garcia has been bullied at school by other kids. The school system won’t comment on Garcia’s individual history.

The Raleigh Police Department — which assigns school resource officers to schools — says that Garcia struck the other girl multiple times but that the other girl did not suffer serious injuries.

A school resource officer, according to Story, made a judgment call to arrest Garcia for simple battery. The teen was charged before for making threats to a teacher at school, Raleigh police spokesman Jim Sughrue said. Police records show she was given a ticket in connection for an alleged altercation at school previously. Because Garcia is older than 15, she was booked and taken to the Wake County Detention Center and placed among adult women.

“I urged him to let me pick her up,” Story said, explaining a conversation with the police officer who arrested Garcia after the bus incident.

Story said that the officer told her he felt that Garcia needed “to learn a lesson.” In the meantime, the school district convened a meeting, Story said, to review the bus incident.

School officials originally labeled the teen’s infraction as a “level two” out of five levels of misbehavior, with five being the most serious on the scale. A level-two punishment is a maximum of five days suspension. But the review concluded that Garcia’s behavior stemmed from “underlying trauma” and that she should not be suspended at all as punishment.

Yet she remained jailed.

“All she has been doing in jail is writing,” Story said. “When I go to see her in jail she hands me wads of paper.” Story said shelters are available where Garcia could be placed instead of keeping her in jail.

On Tuesday, Wake County students and parents joined students from other states to visit federal officials in Washington, D.C. to discuss concerns about school discipline policies they complain are criminalizing kids for schoolyard fights and other misbehavior better handled with in-school counseling sessions that get to the root of conflicts.

The event was organized by the Dignity in Schools Campaign. The group met with federal education and justice officials to urge that more be done to get schools to adopt unprecedented Federal School Discipline Guidance released by the U.S. Departments of Education and Justice in January.