Parents Want Their Kids to Speak Spanish, Too

Amid all the coverage of English Language Learner programs and whether they are successful in teaching English to Spanish-language speakers, one issue often gets lost. Namely, how to preserve heritage languages in the children and grandchildren of immigrants. Recent studies have shown that Latino students who maintain strong ties to the cultural and linguistic heritage of their parents often do better academically than those who do not. 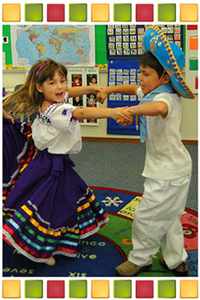 This Washington Post piece examines the dilemma of parents trying to teach their children Spanish in an English-speaking society. It’s a daunting task. As the article notes:

“Despite parents’ and grandparents’ best efforts, ‘Spanish appears to draw its last breath in the third generation,’ said Ruben Rumbaut, professor of sociology at the University of California at Irvine, a leading expert in the survival rates of immigrant languages. He calls the United States ‘the world’s largest language graveyard’ because of the cultural power of American English.”

Some Latino parents are trying to prevent that linguistic demise by enrolling children in dual-language schools, speaking to them only in Spanish, hiring Spanish-speaking nannies and seeking out games that help nurture the language. The parents quoted in the article note that keeping Spanish alive is about more than just language: It is also a way to keep a connection to the Latino culture. “I wanted my children to know this is not just their mom’s weird background,” Pilar O’Leary told the Post. “I wanted them to know this language connects to this amazing culture, all these significant artists and cultural heroes.”

Schools are also following the trend by offering more “heritage speaker” classes for native speakers of other languages.

Finding parents and kids who are making efforts to keep Spanish alive in their households provides a unique angle for coverage of the debate over bilingual programs. It would also be revealing to find schools that offer heritage language classes and to look at the effectiveness of those programs.