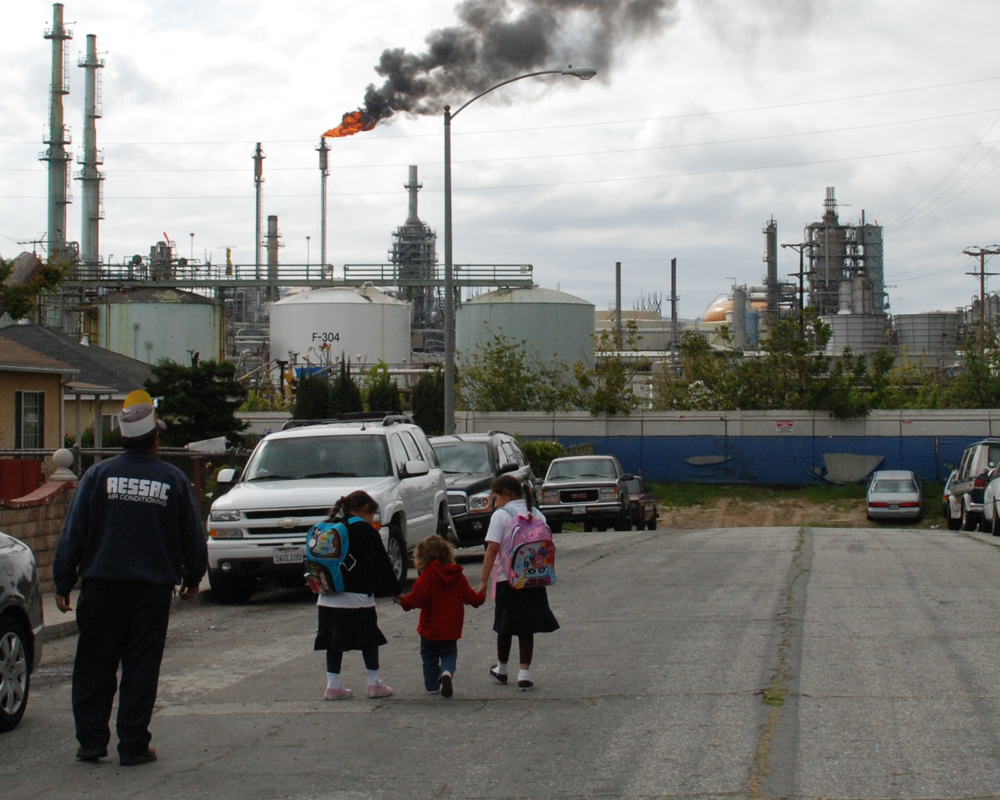 People of color are exposed to more pollution from cars, trucks, and power plants than whites, a new 10-year study shows.

Researchers estimated exposure to outdoor concentrations of a transportation-related pollutant—nitrogen dioxide (NO2)— in both 2000 and 2010, based on neighborhoods where people live and found that disparities in NO2 exposure were larger by race and ethnicity than by income, age, or education. Further, that relative inequality persisted across the decade.

While absolute differences in exposure to the air pollutant dropped noticeably during that time period for all populations, the relative difference—or the percent difference between pollution levels to which white people and people of color were exposed—narrowed only a little.

For the study, published in Environmental Health Perspectives, researchers developed a model combining satellite and regulatory measurements with land use data to predict pollution at a neighborhood level throughout the United States.

The positive news is that across the US, average exposure to NO2 for all races and income levels dropped from 2000 to 2010. Measured in parts per billion (ppb), estimated average annual NO2 exposure decreased from 17.6 to 10.7 ppb for nonwhite populations, and from 12.6 to 7.8 ppb for white populations.

Yet people of color were, on average, consistently exposed to more air pollution than their white non-Hispanic counterparts during the decade.

Considering relative differences, nonwhites experienced 40 percent higher exposures than whites in 2000; in 2010, that gap shrunk only slightly, to 37 percent. Furthermore, in 2000, concentrations of NO2 in neighborhoods with the highest proportion of nonwhite residents were 2.5 times higher than in neighborhoods with the lowest proportion of nonwhite residents. In 2010, that value increased slightly, to 2.7 times higher.

If people of color had breathed the lower NO2 levels experienced by whites in 2010, it would have prevented an estimated 5,000 premature deaths from heart disease among the nonwhite group, researchers say.

“The finding that shocks us is that when it comes to how much NO2 a person breathes, it’s still race that matters,” says senior author Julian Marshall, professor of civil and environmental engineering at the University of Washington.

“At any income level—low to medium to high—there’s a persistent gap by race, which is completely indefensible. It says a lot about how segregated neighborhoods still are and how things are segregated.”

NO2 comes from sources such as vehicle exhaust, power plants, and off-road equipment and is one of six important “criteria air pollutants” monitored by the Environmental Protection Agency. It has been linked to asthma symptoms, increased susceptibility to respiratory problems and heart disease.

The research team, which began their work at the University of Minnesota, previously analyzed NO2 concentrations for the year 2006 by race, income, and other demographic factors identified in the US Census.

The air pollution model, which combines existing EPA air quality monitoring and satellite data with detailed land use information, allows them to accurately predict pollution concentrations across the country at the US Census block level—information previously unavailable at that scale.

For the study, researchers wanted to examine how much progress was made in addressing inequalities in NO2 exposure over a decade. They compared environmental injustice metrics in 2000 and 2010 on a national basis and by region, state, county, and urban areas.

On the whole, policies to reduce NO2 air pollution are working. But the finding that exposure differences are larger by race and ethnicity than by income, age, or education was as equally true in 2010 as in 2000.

“Everyone benefited from clean air regulations and less pollution; that’s the good news,” says lead author and civil and environmental engineering doctoral student Lara Clark. “But the fact that there is a pervasive gap in exposure to NO2 by race—and that the relative gap was more or less preserved over a decade—is the bad news.”

The study didn’t explore the underlying reasons for that gap, but its findings are consistent with previous research. Both racial minorities and low-income households are disproportionately likely to live near a major road where transportation-related pollution is typically highest. US cities, in general, also tend to be more segregated by race and ethnicity than by income.

The narrowing of the racial gap in NO2 exposures was driven more by improving air quality than by demographic changes over the 10-year period. “That suggests that air pollution is coming down faster than cities are becoming less segregated,” Marshall says.

Dylan B. Millet of the University of Minnesota is coauthor of the study. The National Science Foundation and the Environmental Protection Agency funded the work.