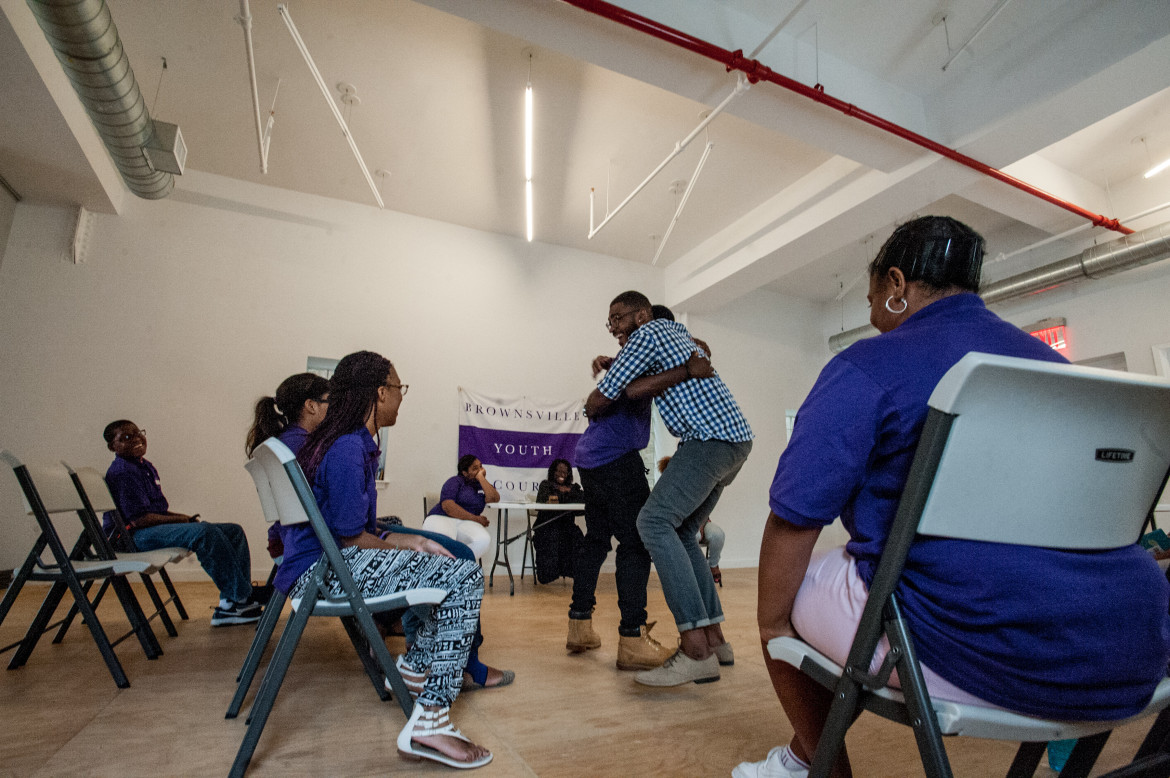 NEW YORK — After apologizing for how hot it was — his office had no air conditioning — then nodding at a floor fan whizzing loudly, Kellen Felmine sat down at his desk at the Brownsville Community Justice Center on Rockaway Avenue.

It was a late August afternoon, and the 27-year-old youth justice coordinator was about to place two important calls that could help change two teenagers’ lives.

“I’m always mindful to not be like a telemarketer, like ‘Hey!’” joked Kellen as he brought his cellphone to his ear, dialed the numbers and waited.

It was two hours before the week’s Brownsville Youth Court was scheduled to hear the cases of two participants, back to back. Both minors ages 16 or 17 (their personal information is withheld at their request to keep them anonymous), they were arrested for the first time this summer and will see a court of their peers as part of a new pilot program called Project Reset taking flight in Brownsville, Brooklyn.

It was two hours before the week’s Brownsville Youth Court was scheduled to hear the cases of two participants, back to back. Both minors ages 16 or 17 (their personal information is withheld at their request to keep them anonymous), they were arrested for the first time this summer and will see a court of their peers as part of a new pilot program called Project Reset taking flight in Brownsville, Brooklyn.

Felmine needed to remind those minors to come to the community center, a courtesy in line with the philosophy that counseling and communication will render better results with youth offenders than intimidation and force.

This hearing before their peers is part of the new diversion program launched in February by the New York Police Department, the Brooklyn District Attorney’s office and the city’s court system. It applies to 16- and 17-year-old first-time offenders with low-level offenses.

As the program has little precedent, one of the biggest hurdles for social workers like Felmine is conveying how beneficial it can be to teenagers after their arrest. The program is optional, and participants — not defendants, a clear distinction in terminology made by Felmine — must be recommended by the arresting officer, reviewed by the district attorney for eligibility, then commit to completing the two days of counseling sessions.

To a busy teenager, two days can seem like a lot.

“If they opt in, the case is dropped down to a violation, it’s closed and it’s sealed,” Felmine said. “They don’t get a record if they go through it.” 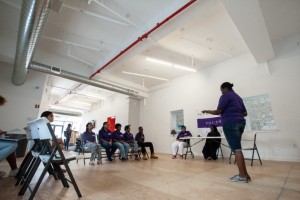 A social worker with family ties to Brownsville, Felmine has been a key player in coordinating the new pilot program that offers counseling as an option to the standard Desk Appearance Ticket (DAT) model.

“It’s really about getting people’s lives back on track before it’s a gateway to potentially future criminal behavior,” said James Brodick, director of the Brooklyn Community Justice Centers of Red Hook and Brownsville. “The NYPD and the DA’s are thinking very differently about how to work with 16- and 17-year-olds who have touched the system.”

Until early this year, first-time low-level offenders in three Brooklyn precincts and one in Manhattan were channeled into Criminal Court where they would plead guilty or not guilty. If they pled guilty, their criminal record would begin, often for such offenses as ticket resale, jumping a subway turnstile or trespassing.

Called Project Reset, these minors are now being given a chance to complete two counseling sessions that satisfy the DAT without stepping foot in court. The infant program is already changing the mindset of minors who feel they’re being given a second chance at a life without a criminal record.

Brownsville is an important location for the start of this program. Less than two square miles, the neighborhood has the highest concentration of low-income public housing in the country. Brownsville also has a well-reported history of the highest rates of police stops in the city under the “Stop, Question, Frisk” tactic.

Jernice Holder, 17, a senior from the neighborhood of Canarsie in Brooklyn, completed the program successfully after being arrested for smoking and possession of marijuana in June.

“Without Project Reset, I don’t think I would be emotionally prepared to start my last year of high school with a misdemeanor for something so stupid and little as marijuana,” she said via email.

When contacted for the interview, she texted back that she was at a water park; not a typical outcome for someone who in an alternate reality would have had a criminal record at just 17.

“Being arrested, going through that process,” explained Felmine of the arrest and arraignment status quo, “how stigmatizing. How traumatic it can be.” 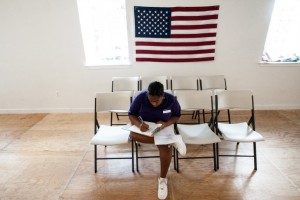 New York is just one of two states that prosecutes all youths as adults when they turn 16. Though this program doesn’t have a direct connection to the many advocates lobbying for New York to raise the age, said a spokesperson for Brooklyn District Attorney Kenneth P. Thompson, it certainly doesn’t hurt the cause.

But is it working?

“It’s too early to tell,” said a spokesperson for the Brooklyn DA. “The efficacy of this program will be determined by whether participants reoffend.”

From its inception through mid-August, according to the Brooklyn District Attorney’s office, there have been 30 eligible participants. Eighteen have graduated, six chose not to enroll, and six cases are still pending.

And there will be speed bumps, Felmine admits.

After placing his calls, only one of the two scheduled participants appeared for their first day of counseling before the Brownsville Youth Court.

“We try to do outreach on our side,” Kellen said as the clock ticked down. Respondents have a total of nine weeks from arrest to court appearance within which they must complete Project Reset. “… obviously deadlines are always an obstacle to overcome.”

Though not all participants of Project Reset are channeled into Brownsville Youth Court, it is an option for many. The court, which trains young people to hear the cases of their peers, is one of six in the city. Each year, according to the Center for Court Innovation, the youth court handles more than 100 cases and trains more than 60 young people.

The Brownsville Youth Court is operating out of a new space in the lobby of the Gregory Jackson Center for Brownsville. The courtroom is not yet built, so court officers arrive early to set up plastic chairs and tables to resemble a real courtroom.

Those filling the roles of judge, bailiff, community and youth advocates, a foreperson and the six jury members are all 14 to 18 years old. The only details of the case the officers know when they arrive are the offense. Advocates for both sides write opening and closing statements just minutes before the cases begin.

This afternoon, they have only one case to hear. Jessica (not her real name) will come a different day to discuss her charge of criminal trespassing in the third.

James (not his real name), a 17-year-old who was arrested for petty larceny, arrived in the afternoon but did not complete his session because he was nervous that one of the jurors, all teenagers from Brownsville, might be a Facebook friend.