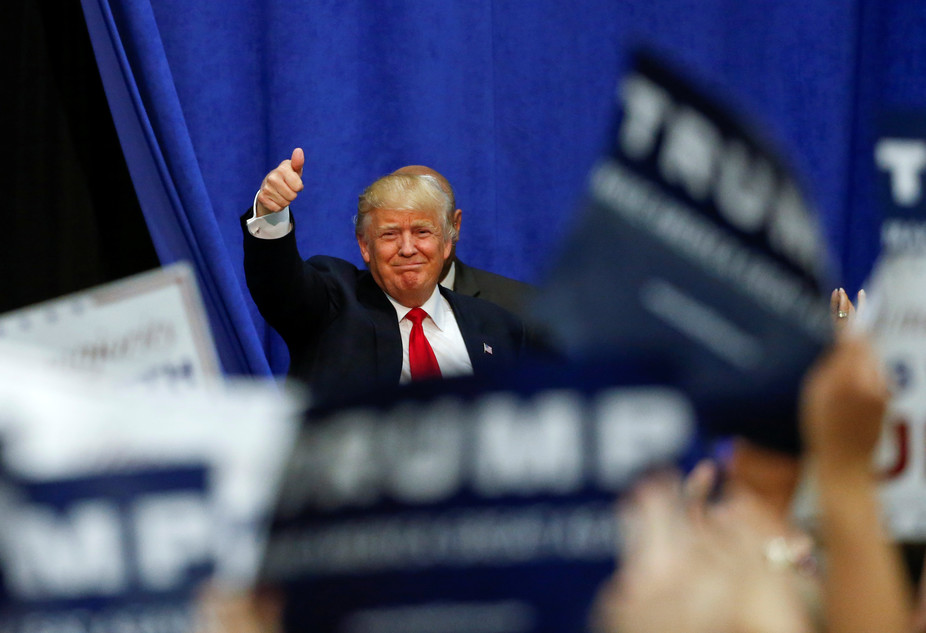 By Anthony J. Gaughan
The Conversation

The GOP nomination is within Donald Trump’s grasp.

Trump’s decisive victory in the Indiana primary on Tuesday night drove his two final challengers to withdraw from the race. Whatever hopes the GOP establishment still harbored of a brokered convention ended when Ted Cruz dropped out of the race on Tuesday night and John Kasich dropped out on Wednesday. Trump will be the Republican nominee for president in 2016.

Trump’s march to the nomination has shocked the GOP establishment and defied conventional wisdom. Could he pull off an even bigger upset by winning the White House in November?

If history, polling data and demographics are any guide, the answer is no. The evidence suggests that Trump will likely suffer a crushing defeat in the general election.

The 2012 presidential election provides a good baseline for analyzing the 2016 race.

To win the presidency, a candidate needs 270 electoral votes. In 2012, Barack Obama defeated Mitt Romney by the comfortable margin of 332 to 206 electoral votes. In the popular vote Obama beat Romney by 51 to 47 percent, a difference of about five million votes. Obama’s victory reflected the long-term trend in which Democrats have won the popular vote in five out of the last six presidential elections.

Donald Trump thinks he can reverse that trend by appealing to angry white voters, but the 2012 results show why that won’t work. Lost in the uproar over Trump’s divisive appeals is the fact that Republicans already win whites by huge margins. For example, in 2012 Romney carried white voters by 20 points, and yet he still lost.

The reason was that Obama won the support of minority voters by even bigger margins. He carried 93 percent of African-American voters, 71 percent of Latino voters and 73 percent of Asian voters.

The electorate’s demographics will be even more unfavorable for the GOP in 2016. Nonwhite voters constituted 28 percent of the electorate in 2012, but in 2016 about 38 percent of Americans are minorities, which means the potential ceiling for minority turnout is extremely high.

Trump’s polarizing campaign seems certain to drive up minority turnout, especially among Latinos. The New York billionaire has repeatedly engaged in demagogic appeals to prejudice, bigotry and fear, declaring among other things that Mexico is sending “criminals, drug dealers” and “rapists” to the United States.

If Trump’s plan is to inspire millions of Latinos to vote against him, it’s working. Even though the general election is still six months away, the “Trump effect” has already sparked a huge increase in voter registration by Latinos. The pace of registration is so great that it is projected that almost two million more Latinos will vote in 2016 than voted in 2012. Moreover, the surge in Latino registration is occurring in key states, like Florida, Nevada, Colorado and Texas.

Republicans must at least be competitive among minority voters to have any chance of winning the White House. George W. Bush, the last Republican to win the presidency, carried 40 percent of Latino voters, which helped him secure a narrow victory over John Kerry in 2004. But a surge in anti-immigrant sentiment among congressional Republicans drove Latino support for the GOP down to 27 percent in 2012, a vulnerability that doomed Romney’s campaign.

The demographic lesson of 2012 is clear. In a diverse nation, Trump has little hope of winning the presidency when 84 percent of nonwhite voters won’t vote for him.

The Trump campaign faces an equally daunting gender gap. According to the Gallup Poll, 70 percent of women have an unfavorable opinion of Trump.

Women made up 53 percent of the electorate in 2012, which makes them the single largest demographic group. Female voters made the difference for Obama. Although Romney carried men by 8 points, Obama won the 2012 election because he carried women by 10 points.

Trump’s problems with women are vastly greater than Romney’s problems. The latest polls indicate that Hillary Clinton could beat Trump among women by 40 points, an astounding margin without precedent in American political history. A gender gap half that size would deliver the White House to Clinton in a massive landslide. It would also lead to crushing losses for Republicans in the congressional races.

To have any chance at all, therefore, Trump must dramatically turn around his standing with women. But he’s not off to a good start, to put it mildly. Last week he claimed that if Hillary Clinton were a man, she would not “get five percent of the vote.” The comment appeared to make Chris Christie’s wife, who was standing directly behind Trump, roll her eyes in apparent disgust.

The gender issue will be front and center in the fall. During the general election, it’s a safe bet that the Clinton campaign will constantly remind voters of Trump’s long history of insulting women in crude and sexist terms.

Despite his deep unpopularity with women and minorities, Trump hopes to somehow change the electoral college map by winning blue states like New York, Pennsylvania and Michigan. In a recent speech Trump promised, “I will win New York against Hillary Clinton.”

But the raw vote totals suggest otherwise. Clinton has won far more votes than Trump in the blue state primaries. For example, in the April 19 New York primary election, Trump won the GOP contest with 524,000 votes while Clinton won the Democratic primary with over one million votes. The same was true in Illinois, where Clinton won more than one million votes in the Democratic primary and Trump won 556,000 votes in the GOP primary. Clinton also won more votes than Trump in other blue states such as Michigan, Massachusetts and Pennsylvania.

But Trump could change the map in the red states – by losing some of them to Clinton. In several states in the ex-Confederate South, Clinton carried more votes in the Democratic primaries than Trump did in the Republican primaries. For example, Clinton won more votes than Trump in Florida, North Carolina, Georgia, South Carolina, Arkansas, Virginia, Louisiana and Texas.

Changing Sunbelt demographics are creating cracks in the Republican South. Obama won North Carolina in 2008 and he won Virginia and Florida in both 2008 and 2012. With Trump as her opponent, Clinton could very likely win all three states in 2016 and perhaps other southern states as well.

And keep an eye on Utah. One of the most conservative states in the country, Utah has not voted for a Democrat in a presidential election in over 50 years. But Trump’s vulgarity does not play well in a state where 62 percent of the population is Mormon. Indeed, early polls show that Clinton leads Trump in Utah. Any Republican who fails to win Utah is not going to get anywhere near the White House.

It’s not just Democrats and political pundits who think Trump is a disaster for the GOP. Top Republicans strategists and party insiders believe Trump will lose by a devastating margin in the fall. Karl Rove, for example, has warned that Trump will cost Republicans the White House, the Senate, and many House seats.

To understand the extent of Republican pessimism, look no further than Trump’s potential vice presidential candidates. GOP officeholders who would normally jump at a chance for the vice presidential slot are running away from Trump. As South Carolina Senator Lindsey Graham quipped, running as Trump’s vice president is “like buying a ticket on the Titanic.”

Many Republican officeholders won’t even attend the GOP convention, including John McCain, Jeb Bush, Kelly Ayotte, Charlie Baker and Mark Kirk. Even Charles and David Koch, generous donors to the GOP for years, have indicated they intend to skip the Cleveland convention.

The bottom line is Republican leaders with an eye on the future don’t want anything to do with Trump. They know the name “Trump” will likely join Goldwater, McGovern and Mondale as names forever associated with crushing presidential election defeats.

Editor’s note: This story was updated on May 4 at 1:20 p.m. EST to reflect the suspension of John Kasich’s campaign.

Democrat, politics, Republican, Trump
Previous Post Las Patronas’ Kitchen: A documentary about the women who give food – and hope- to migrants travelling northbound on “La Bestia”
Next PostWe know there's border security, or this would not have happened

Las Patronas’ Kitchen: A documentary about the women who give food – and hope- to migrants travelling northbound on “La Bestia”
Comment
We know there's border security, or this would not have happened