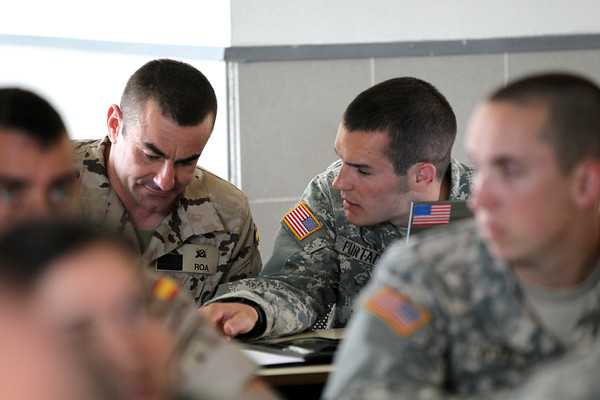 Rachael Tolliver explains how U.S. Army cadets are making the world a safer place through a cultural and linguistic program

Language and cultural barriers keep us from understanding and appreciating the world around us. What seems to us like a worthless flooded swamp is a field of cultivated rice to someone else. That feeling we get when our personal space is severely invaded isn’t universal — it is how other people greet and connect. And while we would consider a belch during or after dinner as bad manners, in other countries it is a sign of appreciation for a very good meal.

But more than that, it is those barriers that can keep people from achieving something as simple as a decent living, and in some areas of the world it keeps people from understanding that Americans aren’t really the bad guys.

Enter CULP — the Cultural Understanding and Language Proficiency program — and the Army ROTC cadets who are participating in this program throughout the spring and summer months. They are one of the resources used by Department of Defense (DoD) to assist less-developed countries, exchange language and cultural experiences, and build better relationships in these areas.

The program, created thanks in part to a 2005 DoD document entitled “Defense Language Transformation Roadmap,” is now in its sixth year and producing the type of results that the DoD and the Army were hoping for.

“These (contracted) cadets are ordered to active duty for training, they complete Soldier Readiness Processing here at Fort Knox and deploy on unit orders to a foreign nation,” Causey explained. “They perform real-world security cooperation missions as directed by the U.S. embassy country teams. These missions — where they practice and learn leadership skills — are often in remote areas and are with partner-nation military personnel and units.

“The cadets won’t get this opportunity again until their first overseas deployments. Such overseas cadet deployments are absolutely the best 500-plus hours of real-world training experience they will get during their tours as cadets,” he added.

Another expectation is that through this effort the U.S. will build better relations with other nations. Depending on the group’s mission, this can be accomplished by work with other militaries, teaching conversational English — which is a large part of what cadets will do — attending foreign schools such as mountaineering, or participating in humanitarian missions.

“English is an international language in which business and some political relations are conducted. Underdeveloped countries are often at a competitive disadvantage due in part to their lack of English skills,” Causey explained.

Causey said one of the many examples of how the cadets have been successful with their missions is from Kyrgyzstan.

“Kyrgyzstan is one of the countries to which cadets travel, participating in security co-operation events with combatant commands — commands located overseas,” he explained. “Many of these events are CULP related and include building partner-nation relationships which are key security-operations objectives.”

Last year, cadets supported the American Corners Program by teaching conversational English, and Causey praised the efforts of one Sgt 1st Class Ronnie Winberry, who made sure that cadets were still in touch with their students. Many of the students have a better chance now to come to America as part of a high school exchange program offered through the embassy because of the cadets’ efforts.

Winberry, who is the Army ROTC recruiting operations officer at Valley Forge Military College, explained that when he contacted the embassy in Kyrgyzstan regarding further instructions on his mission, they gave him several ideas to help their American Corners Program.

“I wound up choosing a mix of a few things in their request and decided (to run) three separate English-language summer camps that would (each) be five days long,” he explained. “The students get to apply for an exchange program (in the U.S.). They don’t really switch places with American students, but they do get the opportunity to come to the U.S. after graduating high school (end of eleventh-grade year) in Kyrgyzstan.”

Students live with an American family, participate in the twelfth grade, and earn an American diploma. Every week, the students’ conversational English skills greatly improved, and they were speaking well enough to create fictional stories in English, as well as participate in a group exercise.

But the after-trip ended a little differently than most.

At the end of each week, they discussed social networking — how it keeps people in touch over great distances and time zones, and the American Corners centers — a U.S. Embassy project — volunteered to let students use the computers in their centers to set up Facebook and email accounts.

“We discussed how we could keep in touch with the center once we left via social networks,” Winberry explained. “We recommended doing things like a Halloween pumpkin-carving class, Thanksgiving headdress-making class, and Christmas card classes — once we returned to the U.S.

“The cadets are doing this on a voluntary basis, with me communicating to center directors before and after the sessions. The cadets let me know ahead of time what they’re doing, and then, when it’s finished they let me know how it went.”

“Each of us has been flooded with friend requests from students in the centers,” Winberry explained. “They like looking at our pictures and talking to us about them, and I’ve even talked with my wife about hosting a student for the exchange program in the coming years. We all hope to continue our relationships through social media and hopefully make contact with them while they’re in the U.S. when, or if, they get selected for the exchange program.”

Cadets offered other examples of expected outcomes from their military-to-military missions. They trained with foreign cadets and foreign militaries, so that as cadets and soldiers from those country and the U.S. progress through the ranks, they have friends in each other’s militaries. These relationships will help them as they progress professionally and personally.

Other outcomes, more introspective in nature, involved cadets who saw the places they came from contrasted against the places they visited. Gannon University’s Kayla Amsler was one such cadet.

She went to Peru on a CULP mission, where she lived in a small village and worked at a local health clinic and also assisted mentally handicapped children. In an interview with her school newspaper, she said it was an experience that put her life in perspective.

“It was definitely the most eye-opening experience of my life,” Amsler said. “It’s hard to imagine the poverty, rubble, and dirt that other people throughout our world live in every day until you experience them for yourself.”

Causey said that experiences such as Amsler’s give cadets a better appreciation for the quality of life they have at home and in many cases resolve them to contribute more to the people and environment around them.

“These types of encounters help illustrate good leadership principles and impress on them the importance of duty, honor, and taking care of others,” Causey added.

Another outcome evolved from the cadets’ efforts in local relation building. Tanzania was a perfect example.

Dr. Thomas Smith, a university adjunct professor who teaches English reading, writing, and grammar as well as American government and world geography at Martin Luther King High School in Atlanta, was selected as one of the professors/teachers who travel with cadets on English-teaching missions. Smith’s job is to put together lesson plans, work with the cadets on methodology of teaching, evaluate the cadets, and help with instruction.

His mission in Tanzania focused on three high schools. By the end of the summer, Smith had, of his own accord and independent of the Army, come up with an idea for continued education for the schools in Tanzania.

“I discussed with the headmaster of Makongo High School the possibility of my high school in the U.S. developing a sister school relationship with Makongo,” Smith explained. “The headmaster felt this was a good idea and wanted to proceed in developing this relationship. We exchanged formal letters of agreement (when he got back to the U.S.), and the relationship was established.”

Cadet Ashley Janovick, from Vitereo University, was one of the cadets participating in that mission. She said that the lack of technology was obvious — there was only one small computer lab but not enough computers for any one class to use them. There were very few accessories and aids for the teachers to use and very few text books.

The students need to learn English because the upper grades are all conducted in English, and English is the second language there. But, she said, “This area is supported by tourism, and the students must understand and communicate well in English so they can get jobs when they graduate.”

To continue the progress Janovick and her fellow cadets started, the sister-school relationship will allow for the development of teacher exchanges and the sharing of ideas from both schools, giving both schools a bigger picture of what international education is about and allowing for future visits to both schools by faculty and students.

MLK High School can actively engage the students and staff at Makongo via a pen-pal exchange of letters so the students in Tanzania can continue developing their English writing skills. Teachers from Makongo High School can also visit schools in the U.S. for further training in teaching English.

Dr. Smith spent his winter months arranging for the English teachers from the three schools to visit MKL High School sometime during the summer or fall. “They will observe elementary, middle school and high school teachers of English. And they will receive one week’s training at the University of North Georgia,” he explained. “They will also have the opportunity to visit the teacher training resource center, observe teacher faculty meetings, and will make presentations of Tanzanian history and culture to students and faculty, as well as visit some cultural sites in and around Atlanta.”

This relationship is a win-win for both schools which “enhances the ongoing relationship of building trust, friendships, and international cooperation between the U.S. and Tanzania,” he said. “It is an enhancement to the CULP mission and contributes to the development of international security cooperation by both countries for the region of East Africa.”

Rachael Tolliver is a public affairs specialist at U.S. Army Cadet Command for, among other things, the ROTC CULP program.