Building on her public support first announced in September, FCC Commissioner Mignon Clyburn has stood up to champion the end of grossly excessive prison phone rates. At a November 15th rally outside the FCC, Clyburn reiterated her public support for the “Wright Petition,” announcing that FCC Chairman Julius Genachowski is now circulating a Further Notice of Proposed Rulemaking on the Wright Petition for a vote. 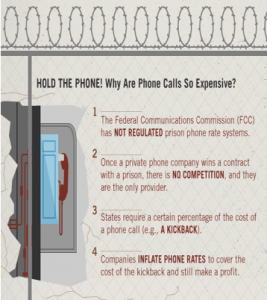 Clyburn also hosted an FCC screening of Middle of Nowhere, a Sundance award-winning film that highlights the struggles of families with incarcerated family members, and that highlights the injustices that emanate from the predatory prison “payphone” system.

Unlike traditional payphones used outside of the prison walls, prison “payphones” are not pay telephones at all. Rather, they are PBX’s set up to monitor inmate conversations.

Filed in 2003, the Wright Petition for rulemaking asks the FCC to cap all interstate inmate calling services at no higher than $0.20 per minute for debit calling and $0.25 per minute for collect calling. The FCC sought comment on this proposal in 2007, but there has been little movement on the issue until Clyburn announced her support.

The Campaign for Prison Phone Justice heralded this announcement as “[t]he first step forward in a ten-year effort to make the price of inter-state calls from prison affordable.”

With approximately 2.2 million people currently incarcerated in the U.S., many have had to accept a collect call from a loved one behind bars. What makes a difficult situation even worse is that prisoners’ families pay exorbitant phone rates for less than 30 minutes per phone conversation.

It can cost families more than $18 for a fifteen-minute phone call with an incarcerated loved one. Speaking once a week for one hour can cost over $280 a month, according to PhoneJustice.org and other civil liberties groups that are pushing for FCC action to reduce rates on interstate prison phone calls.

State prison systems make $362 million in annual gross revenue because of exclusive contracts between the prisons and private phone companies that provide what are essentially kickbacks to state and local governments. These payments inflate the cost of the calls by upward of 42 percent nationwide, according to Prison Legal News.

Such practices negatively impact inmate recidivism, access to counsel, and safety. Ironically, high recidivism rates cost governments far more than they earn in payments from prison phones. Further, the most economically vulnerable communities, predominately minorities, are the most affected by these unfair rates.

Congressmen Henry Waxman (D-CA) and Bobby Rush (D-IL) voiced their congressional support for efforts to reduce the prison phone rates last month at a screening of the critically acclaimed film Middle of Nowhere, hosted by Public Knowledge on Capitol Hill.

“It’s incomprehensible that people in prison aren’t given any basis for the calling costs and that there’s no protection for the public,” said Congressman Waxman. “These costs are only punitive and asking the poorest people to cover the cost. The FCC can put a limit on rates to restrict them to actual costs,” said Waxman.

Middle of Nowhere visually depicts the often hidden and untold stories of entire families affected by incarcerated family members. “This film explores the mental, emotional, and financial difficulties experienced by those with incarcerated loved ones,” said Christopher Lewis, vice president of government affairs for Public Knowledge. “The film is also an opportunity to discuss the high cost of interstate phone rates that families of inmates within state prisons are subjected to, many times as much as $25 for 15 minutes.”

The movie screening is a part of a national push for social justice called the “Wright to Call Home” that seeks to “end predatory prison phone rates” by urging the FCC to pass the Wright Petition.

Clyburn’s support for both the national effort and the FCC’s vote on the issue is a long awaited step forward that finally elevates the proceeding to the top of the Commission’s list of priorities.

Commissioner Clyburn’s vocal support for the prison payphone proceeding is an example of the positive ways the FCC can direct its authority. The FCC’s ten-year delay in acting on the Wright Petition represents just how FCC action – or inaction – can change the world and improve social justice, civil rights, and diversity outcomes.

Another example includes the 1990 National Association of Black-Owned Broadcasters’ media incubator proposal that the FCC has considered in seven dockets over the past 22 years.

The incubator proposal would allow ownership rule waivers for companies that bring into being, through incubation, a new voice, and could result in an immediate increase the number of minority-owned broadcast stations. MMTC has compiled dozens of other examples of years of FCC inaction on civil rights proposals.

Perhaps the Commission might take note of the positive implications of the Wright Petition and ferret out other long-delayed proceedings that have an impact on social justice concerns and could stimulate diversity in media ownership and service to consumers.

Dorrissa D. Griffin, Esq., is a Staff Attorney for the Minority Media & Telecommunications Council, where she works on matters that focus on the advancement of civil rights for minorities and women in the nation’s media and telecommunications industries. She graduated this year from the Florida A&M University College of Law.

Maurita Coley, Vice President and Chief Operating Officer of MMTC, is the former Executive Director of Capital Area Asset Builders and a former Partner at the Davis Wright Tremaine Law and Cole Raywid & Braverman law firms. She earned her law degree from Georgetown Law where she was a recipient of the 2011 Paul R. Dean Award, and she holds a BA in Communications from Michigan State University. Coley served on the BET executive management team in the 1990’s.