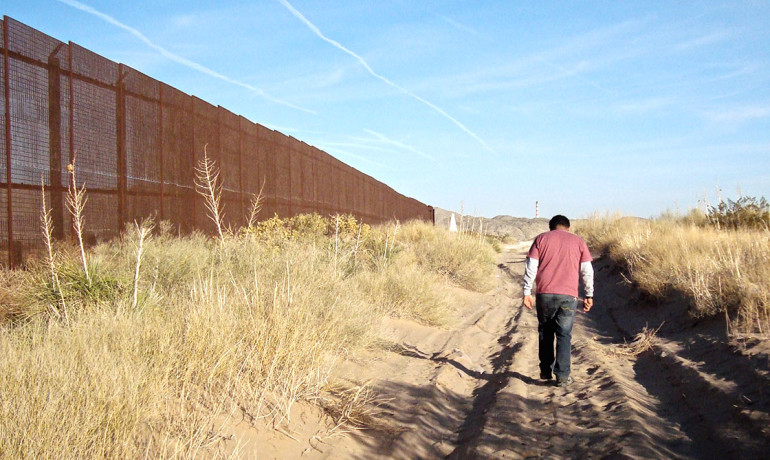 Calling the proposal for an immense wall between Mexico and the United States nonsense, the author of a new book suggests a better option would be to open the border between the two countries.

“The people who are standing with the loudspeakers screaming in our ears come and go and we’re used to them,” says Robert F. Barsky, professor of French, English, and Jewish studies at Vanderbilt University, who wrote the book Undocumented Immigrants in an Era of Arbitrary Law: The Flight and the Plight of People Deemed Illegal (Routledge).

“It’s part of our political culture. The reasoned careful discussions are unfortunately few and far between.”

Barsky uses insights gained from a decade interviewing lawyers, interpreters, public defenders, police officers, jail guards, and migrants themselves to break down the issues that influence people to fear undocumented immigrants because of their supposed effect on crime and the economy.

WOULD THE UNITED STATES BE OVERRUN WITH MEXICANS IF THERE WEREN’T LIMITS TO THE NUMBER OF PEOPLE WHO TRAVELED BACK AND FORTH OVER THE MEXICAN-UNITED STATES BORDER?

No. People are attached to their countries. Their families are there. Their language is there. Their lives are there. It isn’t that much fun to come from Guatemala or Mexico and live in the states. You don’t make much money and you’re not treated well, probably because of racism. You do it out of necessity or adventurism.”

HOW ABOUT THE CHARGE THAT THE UNITED STATES IS THE DUMPING GROUND FOR MEXICO’S CRIMINALS?

There’s never been any evidence that suggests that immigrants are the source of more domestic crime than the domestic population. The reality is that crossing the border is very risky and your chances of being caught are relatively high. If you have a criminal background, you’re running enormous risks.

Opening borders (would) actually make them easier to police. That’s because people would enter the country legally, rather than with the help of smugglers or human traffickers. We are seeing the effects of human trafficking in Europe, and they are tragic.

IS EUROPE AN EXAMPLE FOR THE WAY THE U.S. AND MEXICO COULD MANAGE THEIR COMMON BORDER?

Millions of people would go across the Mexican border regularly if they could, and then go back to their home country. We never address the fact that a lot of people want to be here temporarily and then they can’t get out. They run as much risk returning home as they do coming over in the first place.

ARE OPEN BORDERS GOOD FOR BUSINESS?

Large corporations don’t want to have their trucks sitting there endlessly at the borders. They don’t want their employees to suddenly disappear because they happened to be driving a car with a busted taillight. A mobile workforce is part of free trade.

What kind of a country do we want to live in? Open borders mean no ripping apart of families, so children can stay with their parents. It means children can be educated in the host country legally. It means social services. It means bringing people out of the shadows.

HEAR MORE FROM BARSKY IN THIS VIDEO: