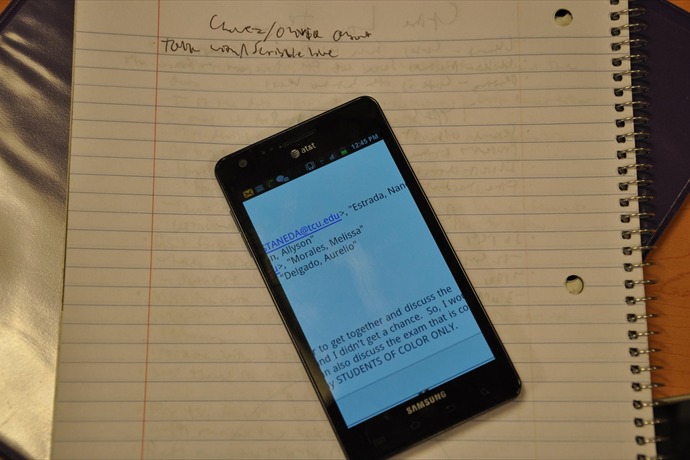 Until this week, Texas Christian University professor Santiago Piñón was apparently best known for his work teaching a popular course on Latinos and religion.

On the web site Rate My Professors, reviewers describe him as a funny, helpful and insightful man. Several go as far as to call him one of the university’s best professors.

But this week, Piñón became the focus of media reports that portrayed him in a very different light — as an instructor who favored Latino students, over his other students.

Inside Higher Ed reports that a student in his class with a Hispanic last name who considers herself white raised concerns about an email she received from the professor offering extra help to “students of color”. She said Piñón, who is Hispanic, sent the email to nine students with Hispanic last names.

“At the beginning of the semester I usually like to invite all my students of color to get together and discuss the challenges they may face during the semester. However, the time slipped by and I didn’t get a chance. So, I would like to ask if you are interested in a get together on Monday afternoon? We can also discuss the exam that is coming up if you want. I don’t mind if this would turn out to be a study session for my STUDENTS OF COLOR ONLY.”

The student said the offer struck her as unfair special attention and favoritism. She then posted the email’s text on Facebook and wrote, “I straight up just got segregated by my own teacher. I’m 75 [percent] white.”

The private university’s enrollment has a significantly lower Latino and black enrollment than in Texas’ public colleges and universities.

According to the National Center for Education Statistics IPEDS system, in fall 2012 the university’s undergraduate enrollment was about 74 percent white, 10 percent Latino, five percent black, and two percent Asian.

Not every student who received the email perceived the professor’s offer negatively. Daniel Castañeda told Inside Higher Ed that especially at a university with low Hispanic enrollment, students appreciate hearing from a fellow Hispanic.

“I think it was written with all good intentions, not meaning to segregate or leave anyone out,” he told the web site, adding that the emal “was taken a bit out of context by some people.”

The situation offers a cautionary tale to universities that offer special support services and enrichment opportunities to minority students. They must proceed carefully with how they present the programs, which may end up resented by other students.

In this case, some could view the professor as prejudiced against his non-Hispanic students. But was he just trying to mentor students with his same ethnic background toward college success, albeit clumsily?

After students complained to TCU administrators, Piñón sent a new email reiterating that students were free to approach him with questions about the upcoming exam. He also said in a statement that his offer was misunderstood and he has offered help to groups of students.

He wrote in the statement:

“I do like to offer myself as a resource to students (particularly those of color) who may face challenges and become discouraged; goal is to encourage and offer support, so I am troubled to think some students may have thought they were being excluded from a study session because that was not at all the intention.”

TCU issued its own statement saying that it “expects that professors provide equal opportunities to all students.”