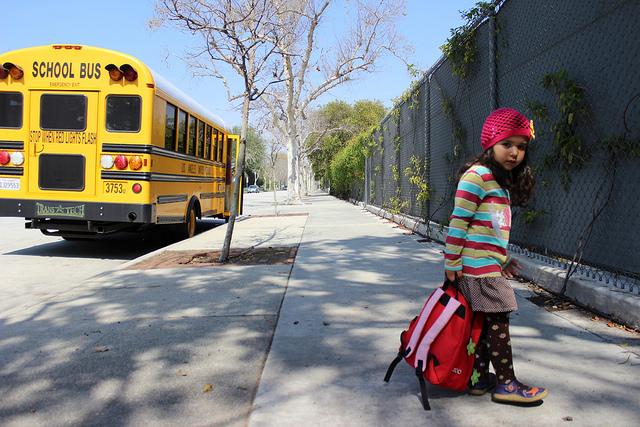 Mexican American children used to be separated from white students in schools because of their Hispanic surnames and the assumption that their English-language skills weren’t good.

That practice is not legal anymore, but Latino student segregation is still a glaring problem in parts of the United States, recent research and news coverage point out. So why is no one talking about it?

Rebecca Klein posed this question in a recent article for The Huffington Post, which took a deep dive into school segregation in the 21st Century. She writes that although California was the first state to ban state-sponsored segregation, the state’s education system remains the most segregated state for Latino students. She goes on:

To be an average Latino student in California today means that you likely attend a school that is 84 percent nonwhite, with high rates of concentrated poverty. It means you live in a two-tiered society where only 20 percent of Latino students taking the SAT in California are deemed college-ready, compared to 41 percent of students statewide.

According to research by the Civil Rights Project/ Proyecto Derecho Civiles at UCLA, the growth of segregation since the Brown v. Board of Education Supreme Court ruling in 1954 has been most dramatic for Latino students, particularly those living in the Western states, where 45 percent of Latino students attend schools in which 90-100 percent of the students are of racial minority backgrounds.

Besides California, the District of Columbia, New York, Texas, Illinois and New Jersey all have more than 40 percent of their Latino student population in schools where the vast majority of students are also minorities, according to the Civil Rights Projects’ 2014 report, ”Brown at 60.”

In the Northeast, Latino enrollment in 90-100 percent minority schools has remained consistently above 40 percent since 1968 — the most unchanged region of the United States in the past four and a half decades. Reporters Linda Borg, Patrick Anderson and Paul Edward Parker examined their own state as a part of this trend in an article for the Providence Journal last week.

For Chalkbeat Colorado, Alan Gottlieb reports that a return to neighborhood schools in Denver — after illegal attempts by the school board to deliberately segregate schools in the late 1960s and early1970s — has seen a return to segregation. More than 80 percent of Denver’s Latino students attend majority-minority schools, and 25 percent attend schools where nine out of every 10 students are Latino, Gottlieb writes.

Studies since Brown v. Board of Education have shown that a desegregated education has led to heightened academic achievement for minority students and other benefits, including higher chances of going to college and thriving in an integrated workforce.

So, how can America fix its Latino school segregation problem?

There have never been any major national studies on Latino student segregation and its effects, but experts hope that will soon change.

“With this increase in the Latino population I think there are lots of scholars who are very interested the Latino student community. It just takes time,” University of Indiana sociology professor Jennifer Lee told Klein. ”We can’t extrapolate studies on African-American students to Latino students.”

According to Emma Brown of The Washington Post, many are hopeful U.S. Secretary of Education Arne Duncan’s successor, John King, will focus on integration efforts.

In its report, the Civil Rights Project suggests various integration practices at the federal and state levels — among them boosting recruitment efforts for Latino and black teachers and administrators, requiring charter schools to enroll a more diverse student population, and adjusting housing policies to reflect more diverse neighborhoods.