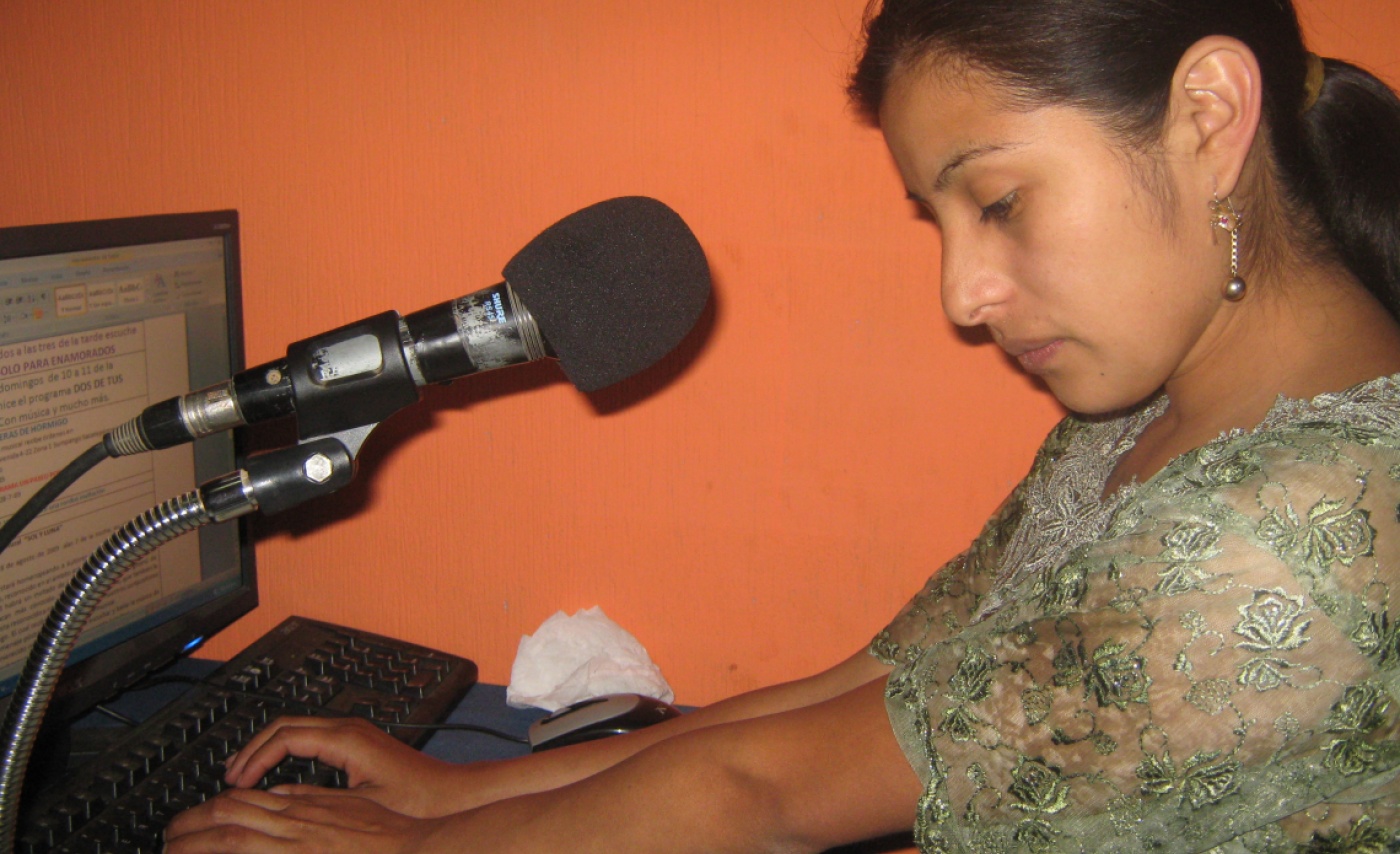 The constant persecution of community radio operators puts not only the right to freedom of expression at risk but also the volunteers that maintain the stations are extremely vulnerable. Despite the odds, radio volunteers continue to advocate in favor of their communities. Indigenous women especially face innumerable obstacles when choosing to participate as radio volunteers.

Indigenous women in Guatemala still live under a highly traditional and patriarchal society. However, in various community radio stations around Guatemala we still see, even if limited, the participation of brave Indigenous women who choose to voice their opinions and educate their communities on air.

In San Pedro La Lugana, Sololá, Radio Sembrador has been a crucial source of information for its small Tzutujil community for over 10 years. Brenda Garcia, a Tzutujil radio broadcaster at Radio Sembrador, has volunteered with the radio for over five years. Brenda hosts several programs both in Spanish and Tzutujil where she talks about topics such as women’s rights, domestic violence, education and the rights of Indigenous Peoples with disabilities. “It feels good to have a space where one can express their ideas and opinions freely, especially as a woman. I am thankful that my family supports me. I may not be making any money but I know I’m making a difference,” says Garcia.

Olga Ajcalon is a radio volunteer at Radio Juventud in Sololá, the radio was recently raided in December 2014 by the National Police. Ajcalon is also a teacher in a small rural village in Sololá where she splits her time between her radio programs and planning for her classes. “I’ve been at the radio for over eight years and many ask me why I continue to do it when I have a full time job,” said Ajcalon. For Ajcalon , as for many radio volunteers, having access to a “on air” space where she can educate and speak freely is a huge resource. “I am not married, so that makes things easier. I don’t know what will happen if I get married. I think things change so much more for a woman when they marry then they do for a man.” In Guatemala, after a woman marries, it is customary even if she is highly educated, that her family will make her choose to either raise a family or work. Since traditionally the women must live with her husband’s family the way a married woman lives her life is heavily influenced by her husband and his family even in decisions like volunteering at a radio. Ajcalon hopes to continue at the radio and she is constantly recruiting and training young women to join Radio Juventud.

In Sumpango, Sacatepequez, one of Radio Ixchel’s goals is to revive the Kaqchikel language and traditions. Elsa Chiquito de Pacache, a determined Kaqchikel woman, began volunteering at Radio Ixchel at the age of 14. “My best friend was offered a position but she declined. I asked her to give me her space and promised that I would take full advantage of it. I’ve been a part of the station since,” expressed Chiquito de Pacache. She is now 26 years old, married, has a daughter and is the current director of Radio Ixchel. “My husband supports me, he always tells me that its good that I take ownership of my identity and that he hopes my daughter takes after me and learns about radio,” said Chiquito de Pacache.

Radio has been a tool that has allowed these strong Indigenous women to pursue their passion for communication. “It is important as Indigenous women to be in radio because in the culture of the past, women were thought of as staying at home and raising kids only. It is important for us to voice our opinions,” said Chiquito de Pacache. “I’ve seen many women join the radio movement enthusiastically, only to leave it once they marry. I am working on creating a network where we can support one another as women broadcasters, so that we have other options after we marry.” shared Garica. The community radio movement in Guatemala will continue to be enriched and strengthened with the increasing leadership that women push for.