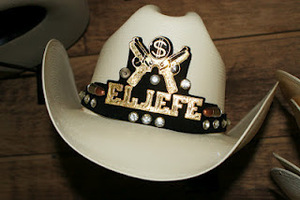 Some say the hat may have been created in Europe in the 14th century. If so, many country folk on this side of the ocean are thankful.

The transformation into a tropical version of the top hat typical of London or the one used by Australian farmers, whose brim angles down more, has nothing to do with the wide-brimmed Mexican sombreros or ‘tejanas.”

“You know, a wide brim, but curved up,” said José Durán, manager of a store carrying Western or cowboy-style clothing in east Tulsa. “And if we’re talking about good quality, they should have a small cut in the back.”

The quality that Durán is referring to is indicated with a number and an X. “It’s easy to understand,” he said. “The more Xs on atejana, the better the quality. And it costs more.”

In fact, he said, there are some that cost more than $6,000. That is determined by the brand, the material and even the peculiarities of the region, since depending on the site, its shape changes, or as those in the know say: the hat’s block.

He said there are tejanas with shapes known as pachuco or ranchera or from states such as Durango and Sinaloa.

“And others with very definite styles, the kind that make you look dressed up.” These have names such as: Deadly Pass, the King, the Boss, the Rustler, the Millionaire, or the Great Centennial.”

Marina Santana, a sales clerk in a shop in east Tulsa that sells boots, belts and hats, says that the “banda” music, the so-called Durango dance step and more recently “tribal” music have led to an upsurge in tejana hats.

“Many young people come to buy their whole outfit,” she said. “You can’t overlook anything, and of course the finishing touch is the tejana.”

The sometimes exorbitant cost of the tejanas makes them more than a decoration; they are a kind of status symbol.

“There are some that are very expensive,” says Santana. “They usually buy them for weddings, baptisms and quinceañeras. When there is a dance, then they buy something less expensive.

According to Santana, older buyers do so to remember the time when they were young men. “There are men who come and spend a whole afternoon trying on several tejanas,” she said. “Maybe that way they remember when they offered serenades in their town squares.”

By wearing a tejana one might imagine for a moment being one of the famous singers such as Pedro Infante, Jorge Negrete, Vicente Fernández, Javier Solís and José Alfredo Jiménez. Or Lola Beltrán, Lucha Villa and Chavela Vargas.
In the end, the hat does not cover up one’s mind. To the contrary, it makes it soar, and even makes it look better. Right? 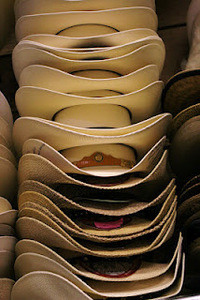 The hat with Aztec roots

Julie Sopetrán, author of “The Hat in Mexico,” says such a garment “is designed and made not only to cover, but also to clarify; it is created through the inspiration of its many uses.” She adds that “the hat protects you from dust, helps create a breeze to stoke a fire, or to put one out; with the hat the bullfighter on horseback gives the bull an artful pass; in a jam it can be used to drink water; it is used to win the heart of a lady, to reward a bullfighter, to free oneself of an enemy, to catch a snake, to kill a fly, to say goodbye, to welcome a friend, to protect oneself from a shot or a machete.”

During the performance of the traditional Mexican Hat Dance or Jarabe Tapatío, the man drops his hat in front of a woman; if she accepts him, she dances on the hat’s wide brim or around the hat.