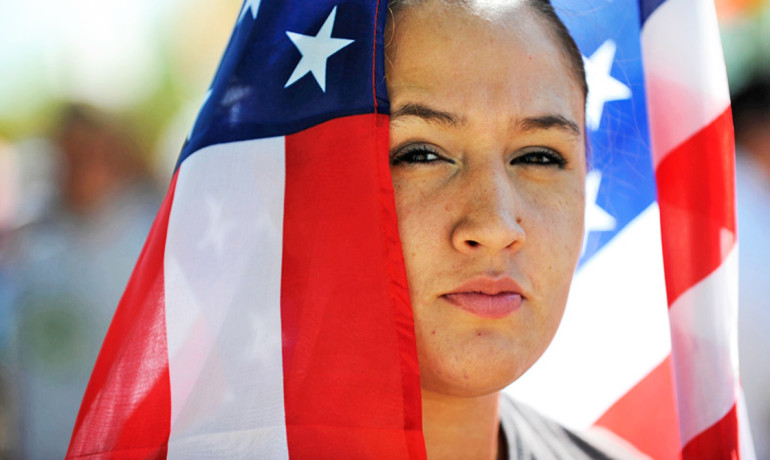 Immigration is shaping up to be among the top wedge issues in the 2016 presidential race. GOP front-runner Donald Trump is stoking the debate with threats to build a wall between the United States and Mexico and eliminate birthright citizenship.

A recent Gallup poll shows that one in five registered voters say they will support the candidate who shares their views on immigration.

A new report that discusses how well immigrants have adapted to US society in the last 40 years makes the case for collecting broader and better data on immigrants and their descendants.

“Our goal in writing this report is to provide a state-of-the-art synthesis of the best social science evidence so that politicians and policymakers can make more informed decisions,” says Irene Bloemraad, professor of sociology and Canadian studies at University of California, Berkeley. “Donald Trump should definitely read it.”

She discussed the report with university writer Yasmin Anwar.

WHY SHOULD WE CARE ABOUT THE STATE OF IMMIGRATION?

There are more than 41 million immigrants living in the United States and another 37 million Americans have at least one foreign-born parent. That translates into one in four people in the United States who are first-or second-generation immigrants. The consequences of integration thus touch everyone, from neighbors and co-workers, to our school systems, the technology sector, health care institutions, and more.

WHAT WERE SOME OF THE REPORT’S KEY FINDINGS? ANY SURPRISES?

Immigrant integration is happening at the same pace or even faster than prior waves across a wide range of measures such as education, employment, earnings, poverty, language, and intermarriage. Immigrants are becoming more and more similar to other Americans over time and across generations.

A lot of people might be surprised to know that if we look at new immigration to the United States, people from Asia now surpass Latino immigrants in terms of numbers.  Also, the undocumented population, counting about 11.3 million people, is smaller now than back in 2007, when it was over 12 million.

English is virtually universal among second-generation immigrants today, which wasn’t the case a century ago. Improvements in the educational outcomes for children with parents from modest backgrounds are striking. And unlike in the past, a significant proportion of immigrants are highly educated, with more years of education than the average American.

These immigrants move immediately into professional occupations and entrepreneurship. Interestingly, regardless of level of education, immigrant men tend to work at rates higher than the native-born.

HOW ARE UNDOCUMENTED IMMIGRANTS FARING?

They are integrating to the extent that they are working, they are learning English, they are involved in their religious communities, and so forth. However, integration is slowed down by a lack of legal status or a precarious immigration status.

For example, the panel found evidence that a lack of legal status not only affects immigrants, but it slows integration among citizen children. There are negative effects on cognitive development for young children, higher levels of anxiety and depression for adolescents, and lower levels of overall schooling for young adults with undocumented parents compared to children with legally secure parents. Over 5 million children in the United States live with at least one undocumented parent, so this is a significant concern.

Another striking finding was that only about half of all immigrants naturalize, even though most immigrants say they wish to be US citizens. Over 7 percent of the US population are not citizens, so that means they cannot vote or run for office, impeding political integration.  The US naturalization level is also much lower than in other high-immigration countries, such as Canada and Australia.

WHAT IS HOLDING THEM BACK?

Since the last report in 1997, there has been a proliferation of many distinct legal statuses that immigrants can hold, from permanent to temporary to precarious status, as well as not having papers, and each carries very different implications for work, post-secondary education, a path to citizenship, and access to public services at the federal, state and local level.

It is remarkable how incredibly complex the laws have become and the difficulty in changing status. However, resolving the legal complexities and passing new legislation is a political, not a scientific matter. I do hope that the panel’s findings will help inform the public debate.

WHAT ARE SOME OF THE MYTHS THAT THIS REPORT DEBUNKS?

That immigrants bring crime. In fact, neighborhoods with higher percentages of immigrants have lower crime rates. But with integration across generations, the descendants of immigrants become more and more like other Americans, and incarceration rates go up.

It’s the same story when it comes to health. Immigrants are less likely to die from heart disease and cancer than the native-born, and on average, they have lower rates of depression, alcohol abuse, and smoking, as well as higher life expectancy. But we again see “integration” to American norms with time spent in the country and across generations so these health advantages dissipate.

As for language acquisition, although a majority of immigrants don’t speak English at home, two-thirds report they can speak English well or very well, and by the second generation English proficiency is very high. Indeed, linguistic integration happens more quickly now than a century ago. Still, there is a need for high quality English language instruction, among school-aged children and for adults.

Four and a half percent of US households are linguistically isolated, which means no adult in the household speaks English. Funding has not kept pace with rising numbers, however. In fact, federal and state support for adult English-as-second-language classes has declined.

DOES THE REPORT EXAMINE BIRTHRIGHT CITIZENSHIP?

We did look at birthright citizenship in the context of civic and political integration and concluded that it is one of the most powerful mechanisms of formal political and civic inclusion in the United States. Birthright citizenship helps mitigate the inter-generational transfer of integration barriers produced by undocumented and precarious or temporary legal status, though it does not seem to erase them entirely.

From our investigation, it is clear that immigration is contributing to demographic renewal, an important process given the retirement of the Baby-Boomer generation. Immigration is also changing social relations, sometimes in the most intimate spheres of life. Immigration to the United States has always been a patchwork quilt of backgrounds, but today that quilt is more intricate than ever.

WHAT CAN PRESIDENTIAL CANDIDATES AND ELECTED OFFICIALS LEARN FROM THIS REPORT?

The country receives an incredible diversity of immigrants from all corners of the world, of many different cultural and religious backgrounds, from those with very modest levels of education to the very highly educated. Overall, with time, and from one generation to the next, we find evidence of significant integration, in education, speaking English, where one lives, and so forth. This could be reassuring for policy-makers.

Yet the complexities of integration due to legal status, the challenges of racial integration, the fact that some integration makes immigrants less well-off, and the relatively low levels of citizenship acquisition are all areas of concern.

The Carnegie Corporation of New York, the Russell Sage Foundation, National Science Foundation, the US Citizenship and Immigration Service, and the President’s Committee of the National Academies funded the report.