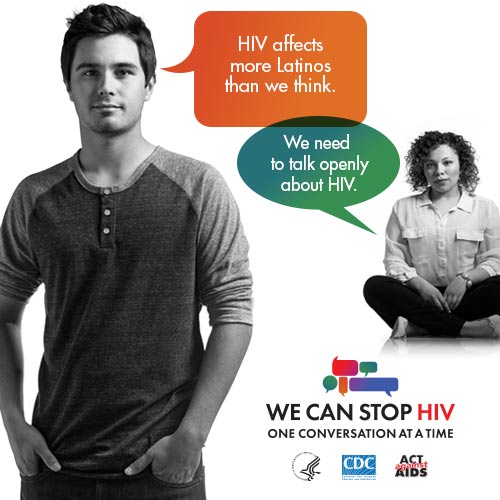 Hispanics comprised 21% of new HIV/AIDS infections each year in the United States.

About 1 in 36 Hispanic men and 1 in 106 Hispanic women will be diagnosed with HIV at some point, according to the Centers for Disease Control and Prevention, Latin Post reports.

That’s why the CDC launched a new Spanish-language campaign, Podemos Detener el VIH Una Conversación a la Vez (We Can Stop HIV One Conversation at a Time).

The campaign aims to provide knowledge and promote talking about HIV prevention to “increase HIV awareness, decrease stigma and shame that are too often associated with HIV, and play a part in stopping HIV in the Hispanic/Latino community.”

It also has a four-part, telenovela-style video series about how a fictional Hispanic family deals with HIV/AIDS (produced by AltaMed):

The campaign also is available for Hispanics in English.

AIDS, cultural attitudes, HIV, Latinos, stigma
Previous Post Some Arizona schools take a pass on program to give free meals to students
Next PostCrowdfunder: Field trip for children of Casa Hogar in Oaxaca

Some Arizona schools take a pass on program to give free meals to students
Comment
Crowdfunder: Field trip for children of Casa Hogar in Oaxaca