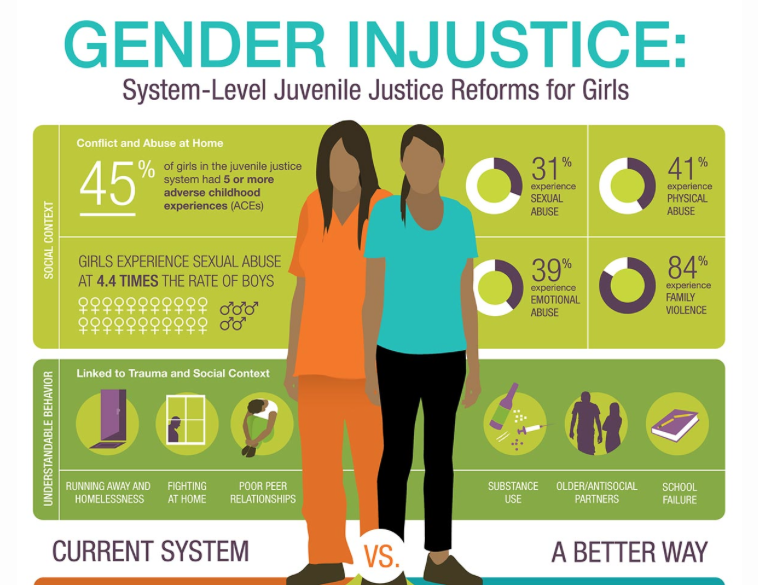 Juvenile justice reformers risk leaving girls behind if they fail to consider how traumatic experiences push girls into the system, says a new report.

Officials and advocates are more aware than ever of the way trauma affects girls’ behavior, but too few reforms are tailored to those experiences, said Francine T. Sherman, lead author of the report and a clinical law professor at Boston College Law School.

“Not only are we not fixing it, we are in an unfair and biased way penalizing girls for their background,” she said.

The report, “Gender Injustice,” examines how trauma shapes girls’ behavior and how girls end up in the juvenile justice system, and recommends reforms to help girls rather than penalize them.

Sherman and co-author Annie Balck call on the juvenile justice system to end policies that criminalize such behaviors as running away or fighting at home, to engage families, to use trauma-informed approaches, to promote positive youth development, to limit secure confinement and to use health care funding to help girls who have experienced trauma.

“The strategies are out there, but they’re not being applied intentionally,” Sherman said. “There are all these opportunities to do a better job.”

She pointed to diversion from the juvenile justice system into community programs as one method that many jurisdictions pursue but that could be more effective for girls if it targeted their experiences.

At the other end of the system, jurisdictions should look carefully at their secure facilities for girls, where often only a few girls are being held, Sherman said. Girls have sometimes been an afterthought because they are so few, but that’s precisely why systems should look for solutions, she said.

The report was released through The National Crittenton Foundation and the National Women’s Law Center.

Those experiences lead to behaviors that push girls toward the justice system, the report said.

The researchers highlighted data that shows girls’ share of the juvenile justice system has grown during the past 20 years at all stages, including arrest, court caseloads, detentions and probation.

In 2012, girls were 29 percent of youth arrested nationwide, compared with 20 percent in 1992, even as the number of arrests declined overall. Girls’ arrests were disproportionately for offenses that were not public safety threats, such as prostitution or theft.

Once girls are arrested, they risk moving deeper into a system that is not prepared to meet their needs, the report said.

Girls also are more likely than boys to be detained for status offenses (behaviors such as running away or breaking curfew, which would not be crimes if committed by adults), technical violations and for simple assault.

Those are offenses that would be better dealt with in girls’ communities than in detention, the report said.

Liz Ryan, chief executive officer of the Youth First! Initiative, said the report is a road map for how to change that experience — and comes at a time when reformers are open to ideas about girls.

“There’s this rhetorical phrase a lot of us have: ‘What about the girls?’ I want to get to a point where I don’t have to ask the question in meetings,” she said.

The report also looks at how particular populations of girls are affected by the juvenile justice system. Girls of color and lesbian, bisexual, questioning/gender-nonconforming and transgender girls face additional barriers to appropriate care, the authors said.

Reformers also need to think carefully about the particular needs of girls who are pregnant or parenting, have run away or are victims of sex trafficking or in-home violence, the report said.