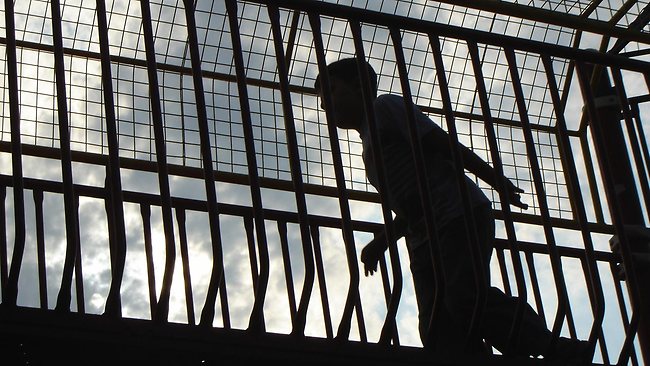 WASHINGTON – They’re known as status offenders – youths who commit offenses that wouldn’t even be considered offenses but for their age: truancy, running away from home, curfew violations, alcohol or tobacco possession.

Too often, these status offenders are treated like criminals. Thousands of them end up in juvenile detention centers each year after getting tangled up in the juvenile court system.

A report released Wednesday by the Washington-based Coalition for Juvenile Justice says status offenders should never be detained. The report says doing so may increase the likelihood the youths will become more involved with the juvenile justice system later and even with the criminal justice system when they become adults.

The nonprofit CJJ developed the recommendations in partnership with the National Council of Juvenile and Family Court Judges and a team that included juvenile and family court judges, child welfare workers, juvenile defense attorneys, juvenile corrections and detention administrators and community-based service providers.

“Research and evidence-based approaches have proven that secure detention of status offenders is ineffective and frequently dangerous,” the report said.

The report, titled “National Standards for the Care of Youth Charged with Status Offenses,” said detention centers are often ill-equipped to deal with the underlying causes of status offenses and that detaining status offenders doesn’t deter future status offenses or delinquent behavior.

Moreover, the report said, detained status offenders are often held in overcrowded, understaffed facilities where they can be exposed to violence.

Indeed, almost 20 percent of status offenders and other youths held for non-delinquent offenses are housed with youth who have committed murder or manslaughter and 25 percent are placed in units with felony sex offenders, the report said.

“Placing youth who commit status offenses in locked detention facilities jeopardizes their safety and wellbeing and may increase the likelihood of delinquent or criminal behavior,” the report said.

And removing youths from their families and communities prevents them from developing “strong social networks and support systems necessary to transition successfully from adolescence into adulthood,” the report said.

The number of status offenders detained had dropped off sharply after the federal Juvenile Justice and Delinquency Prevention Act stipulated in 1974 that states receiving federal juvenile justice grants could not detain status offenders.

But in 1980, the JJDPA was amended to include an exception allowing judges to confine a youth adjudicated for a status offense if the child violated a valid court order not to repeat the offense.

Today, more than half of U.S. states continue to allow use of the valid court order exception to detain youths charged with status offenses, and the Office of Juvenile Justice and Delinquency Prevention, part of the U.S. Justice Department, reports about 12,000 annual uses of the exception nationwide.

The report calls for a ban on the exception that enables judges to lock up status offenders.

“You know, these are young people who’ve committed no crime, and we think in some ways the very label ‘status offenders’ is a misnomer,” Marie N. Williams, CJJ’s interim executive director, told JJIE.org. “They’re not offenders at all, you know.

“They’re kids who skipped school, who have difficulties in their families, kids who might have mental health problems, kids who might have parents who aren’t supportive, kids who’ve run away,” Williams said. “They’re very, very good and clear reasons that they don’t belong in [the juvenile justice system]. … The very act of putting in detention status offenders might, in fact, increase the likelihood they would engage in delinquent behaviors later.”

The report urges that status offenders be diverted from the juvenile justice system altogether through the least-restrictive placement options, including community-based alternatives.

For instance, the report noted, young people’s brains continue to mature until their early- to mid-20s, and adolescents are more likely than adults to be susceptible to peer pressure, engage in risky or impulsive behaviors and experience mood swings. The Supreme Court has acknowledged some differences in youth brain development and adolescent behavior in decisions barring extreme sentencing of youths.

“So what we’re advocating for … is that the interventions that we prescribe for these young people reflect what we know about these young people as distinct from adults,” Williams said. “We tend to treat kids who do anti-social things as though they’re sort of miniature adults who’ve chosen to do wrong, and now we know that’s not the case.”

Annie Salsich, director of the Center on Youth Justice at the New York-based Vera Institute of Justice, shared those sentiments.

“These are kids that are acting out, but not in a criminal nature, and they kind of get sucked into the juvenile justice system because their behavior is prohibited only due to their age,” Salsich told JJIE.org.

“We’re really focused on not using detention or not using long-term placement. … But the way that we do that is we really just say that you have to close the doors to the courtroom as much as possible, and that’s the way you’re going to have the biggest impact.”

(Next week, the non-profit Vera Institute will launch the Status Offense Reform Center, an online resource filled with information about status offenses and ways to respond to them.)

CJJ’s report stressed the importance of looking beyond the surface to get at some of the possible causes of status offenses.

“Status offenses are often symptomatic of underlying personal, familial, community and systemic issues, as well as other, often- complex, unmet and unaddressed needs,” the report said.

Truancy, for example, could be the result of bullying, harassment of lesbian, gay, bisexual, transgender or questioning (LGBTQ) youth or struggles keeping up in school for students with learning disabilities or those for whom English is a second language.

Rejection of LGBTQ youth by families could result in their running away, as could abuse, neglect or family disputes.

Youths can also end up in the juvenile justice system for status offenses if they’ve been exposed to traumatic events in their lives, including domestic violence; have a history of running away; have dropped out of school or experienced academic failure; live in violent communities; or have mental health or substance abuse issues.

Those who first respond to alleged status offenses should be trained about factors that can lead to such behaviors as well as the availability and role of screenings, assessments and services, the report said. Such first responders should put the emphasis on non-juvenile justice system prevention and intervention through family and community resources.

That could mean therapy for an entire family; alternative dispute resolution such as mediation; referrals to community organizations, mental health providers, mentors or substance abuse and alcohol treatment; an alternative school or other educational placement.

“We would love to see either in statute or in policy that these [types of] things have to happen before this kid winds up in court, and if they haven’t happened, then don’t bring them here, go bump them back down” and out of the juvenile justice system, Williams said.

Judges and other court officers such as magistrates should dismiss or stay proceedings when community-based services or other approaches could eliminate the need for court jurisdiction, the report said.

The report stresses first responders should focus on status offenders’ positive qualities and assets, not just negatives and liabilities.

It also emphasizes the importance of involving youth in the resolution of status offenses.

“It is critically important that youth have a voice in their status offense cases, where others are making critical decisions about their lives,” the report said. “Youth involvement can range from gaining their input about the services in which they participate to where they may live or when and how they interact with their parents.”