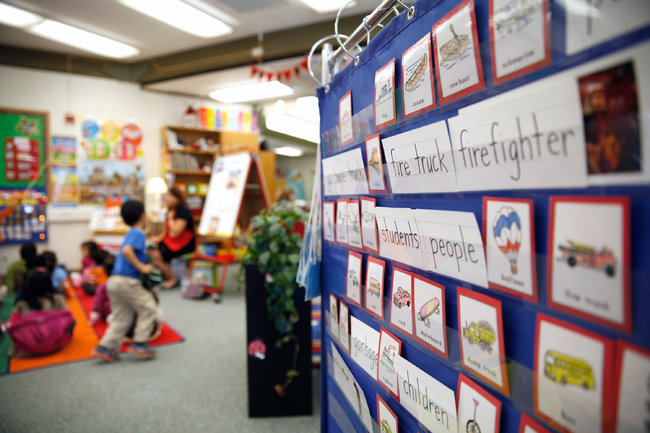 A new study shows that as early as 18 months old, children from poor families understand words much more slowly than those from affluent families. Previous studies have had similar findings in children of older ages.

The study by Stanford University psychologists was recently published in the journal Developmental Science. The psychologists tested a group of 20 babies at 18 months old by how they identified objects based on language. They were evaluated on accuracy and time. They were then retested six months later.

The language activities included being shown pictures of a dog and a ball and then being directed to “look at the ball.” Less affluent children were slower to look at the ball. The speed at which the children identified objects reflected an achievement gap that persisted later. Children who recognized words more quickly had larger vocabularies and scored higher on standardized tests once they reached school age.

According to researchers, parent surveys showed that between 18 months and 2 years old, the affluent children added 260 words to their vocabulary, while poorer children lagged by 30 percent.

“By 2 years of age, these disparities are equivalent to a six-month gap between infants from rich and poor families in both language processing skills and vocabulary knowledge,” Stanford psychology professor Anne Fernald said in Stanford Today. “What we’re seeing here is the beginning of a developmental cascade, a growing disparity between kids that has enormous implications for their later educational success and career opportunities.”

Fernald is also involved in research related to development of Hispanic infants who are learning Spanish and English.

early childhood, language, poverty, preschool, wealthy
Previous Post Latino loses 200 pounds by 'running for a change'
Next PostViernes Video: Sci-fi short highlights fact of life — not everyone can be "Number One"

Latino loses 200 pounds by 'running for a change'
Comment
Viernes Video: Sci-fi short highlights fact of life — not everyone can be "Number One"