Sabio is an organization that aims to help unemployed women and minorities become tech workers through an intensive boot camp and targeted networking with tech professionals. Currently the group is competing in the LA2050 challenge in an effort to seek funding. 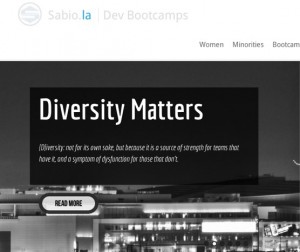 Co-founder Gregorio Rojas worked 14 years programming in a variety of fields, from e-commerce to social networking, and said that the lack of diversity in tech was one of the main drivers for him to found Sabio.

“The technology sector has so much opportunity and potential for those that decided to be a part of it — but we struggle to find people to get involved in building and creating technology,” Rojas said.

He foresees being able to train people for tech jobs in as little as three months.

But the real value comes from the fact that tech jobs, unlike other careers, are more lucrative and sustainable. By his estimates one adult can earn 164% of the income needed to live comfortably by themselves, and then sustain a family of four a couple of years after entering the field.

“Diversity is a big driver of innovation. If any industry should value diversity it should be the tech industry, but clearly it does not.”

For more information about Sabio check out the group’s website.