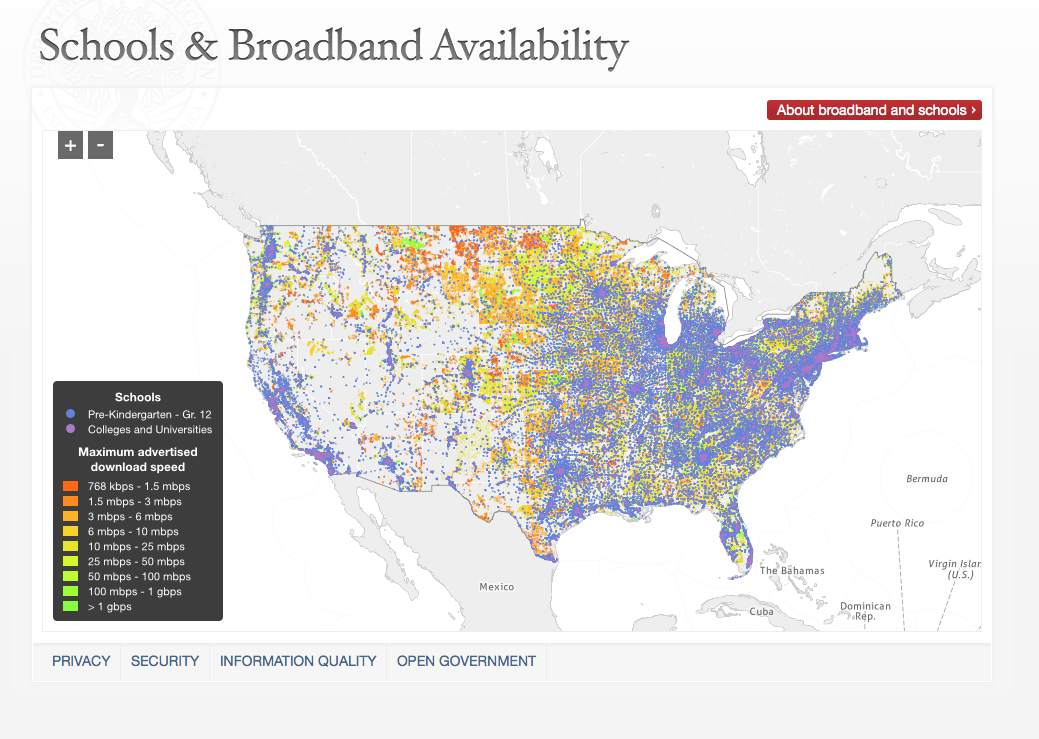 A study released last month revealed a significant gap in access to superfast Internet in schools based on race, income, and population density. In a world where access to technology equates to opportunities for success, African American, Hispanic, rural, and low-income students are at a severe disadvantage compared to their white, affluent, and suburban counterparts. This digital divide has been well-known and studied, and in recent years, the White House, through its Digital Promise initiative, and the Federal Communications Commission, through its National Broadband Plan, have set the tone that our nation needs to make connectivity a priority. Unfortunately, the new study serves as a stark reminder that we have much further to go to achieve full educational equity in this nation.

In other words, according to the study, “When looking at the fastest speed threshold of 100 Mbps or more, African Americans and, to a somewhat lesser extent, Latinos are less likely to be in schools with speeds of 100 Mbps or more than white students. At the same time, Latinos (especially) and African Americans are more likely than whites to be in schools that have internet speeds of 10 Mbps or less.”

In his analysis, Dr. Horrigan succinctly stated, “At least when it comes to internet speeds, it is much better to be a student in a heavily white school than one in a school with a large share of minority students – by a margin that approaches 2:1.”

Dr. Horrigan translated these disparities into an overall access gap representing the number of students who either lack access to the highest speed tier or are overrepresented in the lowest speed tier: 1.1 million for African American students, 1.75 million for Hispanic students, 2.75 million for low-income students, and 1.1 million for rural students. Put into other words, if the percentage of minority, low-income, or rural students in schools with network speeds of 100 Mbps or more were to equal the percentage for white, urban, and suburban students attending such schools, millions more students would have access to the opportunities available thanks to superfast Internet access in the classroom.

Access to high-speed Internet has a direct correlation with opportunities for success within the next few years, as tech-related jobs will account for a larger share of the economy. The Georgetown University Center on Education and the Workforce has projected that STEM-related (Science, Technology, Engineering, and Mathematics) occupations will account for 8.6 million jobs by 2018, growing by 17 percent from 2008. By comparison, non-STEM occupations will grow by just 9.8 percent over the same period. BBSJ has previously reported on the significant racial gap in STEM education, whereby there is a lack of adequate math and science preparation in minority students and a disconnect between minority students and STEM careers.

The National Education Alliance outlines how access to 21st century technology connections and tools can spur student interest in the classroom. In its “Technology in Schools” policy brief, the NEA noted the strong connection between student access to technology and achievement in school. According to the brief, “Researchers are finding a clear link between technology, achievement, and motivation. Most experts engaged in the technology debate agree that students and teachers tend to be more engaged and interested when technology is an integral part of teaching and learning.” The brief adds that “most educators agree that technology improves student learning, but the vast majority also believe their students enjoy learning more with technology.”

Closing this gap is vitally important in our evolving economic landscape, where the poverty gap continues to widen and minorities are set to become the majority population in this nation. If we don’t take greater steps to bring equitable access to 21st century technology as tech-heavy classroom instruction becomes the norm and opportunities abound for those with access to high-speed Internet connections, African American, Hispanic, low-income, and rural students will find themselves at a continued disadvantage – and continue to fall behind.

Marcella Gadson is the Editor-in-Chief of the Broadband and Social Justice Blog and Director of Communications at the Minority Media and Telecommunications Council (MMTC).