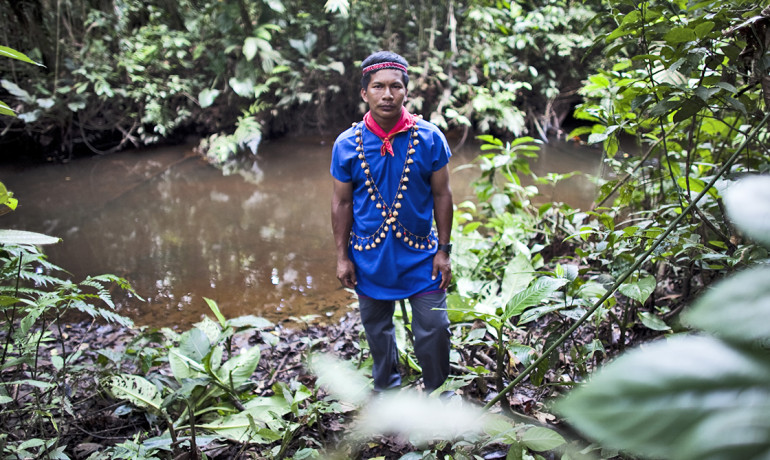 A new computer model is able to predict how outside forces like modern technology will affect the sustainability of indigenous peoples in the Amazon and elsewhere.

Modern culture and technology have infiltrated all but the very most isolated places on Earth, changing forever how the people in those areas interact with both themselves and the outside world, researchers say.

Roughly 45 percent of the planet’s terrain remains covered by natural vegetation—the rest has been developed as cities or agriculture, or is ice—and about half of that land is controlled by indigenous peoples. These spaces store huge quantities of carbon—thus keeping it out of the atmosphere—and provide habitats for most of the world’s biodiversity of animals and plants.

Most indigenous peoples now have frequent contact with other cultures and have experienced improved health care and Western-style education, says Jose Fragoso, a senior scientist in the biology department at Stanford University and co-author of the new model.

“These societal changes can affect how much natural vegetation occurs by changing how much farming people do. Or if they need to hunt more, that can change the number of animals on their lands.”

‘ALL PEOPLE NEED CALORIES’
The new computational tool simulates how these types of land-use changes affect the sustainability of these areas. Fragoso and colleagues based the model on the relationships between various ecological factors that affect indigenous communities, such as the rate of deforestation, changes in the diversity of vegetation, agricultural output, hunting practices, and the abundance and diversity of the 10 most-hunted species.

They then projected how changes in these parameters could increase or decrease a community’s growth rate. Population growth was limited by the caloric demand of humans, and how much nutrition the land and animals could reasonably supply.

“This makes it more of a universal model, because all people need calories,” Fragoso says. “They must meet their daily caloric requirement. If they farm more to do that, then they hunt less, or vice versa. But that drives the system and causes all the changes to occur.”

To test the model, the scientists entered historical population data for two villages in the Amazon that Fragoso has been closely involved with for several years.

“We developed the model that captures complex interactions between people and environment. To examine how the model works compared with field data, we started with an undisturbed village, and ran the model for 100 years to project how that village and area would grow and change,” says postdoctoral scholar Takuya Iwamura said. “The population increases as animal population and vegetation cover reduce, but at some point it stabilizes, and that number closely matches what we see in the field.”

The model reveals that in an environmental system dominated by hunting and some cultivation, the forest and biodiversity of the system can balance with the livelihoods of indigenous people if the human population stays within a relatively narrow sustainable range.

“Once indigenous populations move outside that space, the land use rapidly shifts to another state characterized by a much lower forest cover, with negative impacts on both biodiversity and carbon stocks in the vegetation,” says Eric Lambin, professor and senior fellow at Stanford’s Woods Institute for the Environment.

Fragoso suggests collaborating with governments, institutions, and agencies to apply the model. Many such entities are already interested in this model, or one like it, to help institute policy and management regarding indigenous lands.

DEVELOP ‘RIGHT UP TO THE EDGE’
“Few such areas may still remain in the modern world, but preserving that cultural diversity is very important,” Lambin says. “The model helps us to understand under what conditions these traditional, indigenous systems can be sustained.”

The researchers also hope to expand the model’s scope to examine how activity on the outskirts of an indigenous land can affect sustainability. For example, Brazil has become the largest soybean producer in the world, in part because farmers have converted forests into farmlands that run right to the edge of indigenous areas. Similar development is occurring with hydroelectric dams and roads.

“What happens to those people and sustainability of a system when you develop right up to the edge?” Fragoso says. “This model could eventually allow us to make these sorts of projections.”

The scientists caution that the model can’t currently answer all questions. The initial version only considered the relationships between humans and animals and the forest, but educational, behavioral and policy factors also play a critical role in guiding the sustainability of these areas.

“As other models, this is based on our assumptions and doesn’t tell you every single thing,” Iwamura says. “But it simplifies reality on certain aspects, and it can be useful to tease out some really complex realities, and helps to identify the important mechanism which causes societal and ecological changes.”

Future versions could incorporate these other external factors. In the case of education, the scientists are hopeful that they can guide communities toward sustainable decisions by showing them how the location of a farm and how often they crop it could affect the surrounding vegetation and animal populations years down the road.

Jeffrey Luzar of the US State Department and Kirsten Silvius, of the Gordon and Betty Moore Foundation, are coauthors of the study, which appears in the journal Environmental Modelling & Software.