Latina Lista: News from the Latinx perspective > Columns & Features > BlogBeat > Spanish use is steady or dropping in US despite high Latino immigration 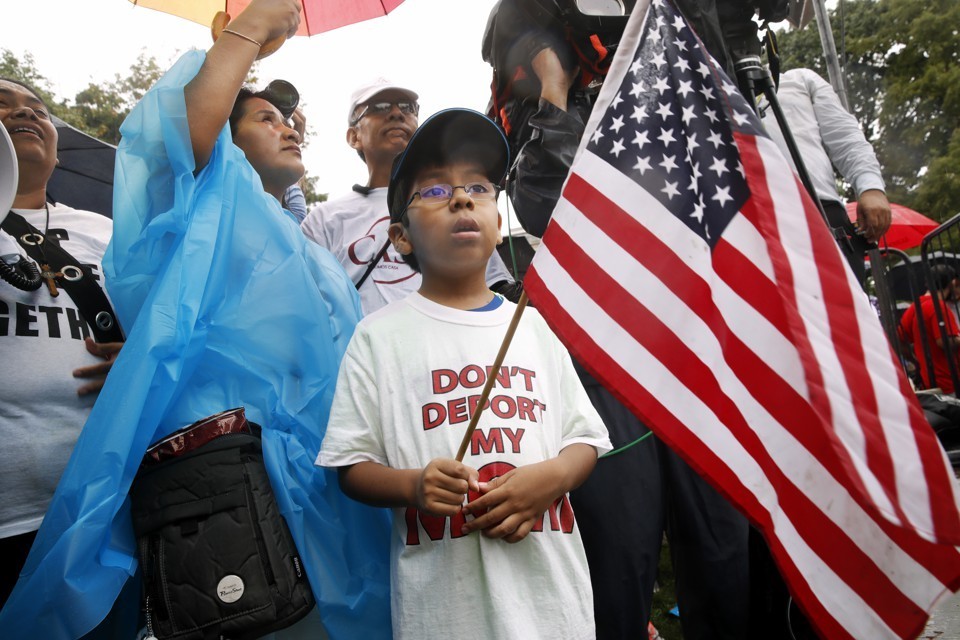 By Phillip M. Carter
The Conversation

Hidden just beneath the surface of the ongoing heated debate about immigration in the United States lurks an often unspoken concern: language. Specifically, whether immigration from Spanish-speaking countries threatens the English language’s dominance.

Language and immigration have long been politically linked in the U.S. When Farmers Branch, Texas, passed an English-only “requirement” in 2006, then-Mayor Tim O’Hare justified it by saying that “we need address illegal immigration in our city and we need to do it now.”

The Farmers Branch city council voted unanimously to drop the controversial ordinance last November, but 31 states and hundreds of towns in the United States still have local English-only or “official English” laws.

The perception that Latino immigration has led Spanish to sideline or even overtake English in the U.S. is widespread. After all, Spanish is the second most dominant language in the country, after English. It is spoken by 48.6 million people: 34.8 million Spanish-speakers age 5 and older of various national-origin backgrounds, 11 million undocumented Latin American immigrants and an estimated 2.8 million non-Latinos who use Spanish in the home.

Census data on U.S. demographic changes project that by 2060 the Latino population in the U.S. – the group most likely to speak Spanish – will grow 115 percent, to 119 million.

But these figures don’t tell the whole story. As a linguist, I have studied Spanish-English bilingualism in Texas, California, Florida and beyond, and I can attest that Spanish is not taking over the United States. Far from it: Political fearmongering notwithstanding, Spanish actually holds a rather tenuous position in the country.

From bilingual to monolingual

How can the Latino population be growing rapidly while Spanish-speaking remains stable? The answer lies in oft-overlooked peculiarities of census data and in the particular linguistic history of the United States.

If one looks only at immigration patterns over the past half-century, it is true that the U.S. has been gaining Spanish-speakers. From 1965 to 2015, roughly half of all immigration has come from Latin American countries. This trend added some 30 million people, most of whom came speaking Spanish, to the American populace.

But this is only half the story. While new immigrants bring Spanish with them, research shows that their children tend to become bilinguals who overwhelmingly prefer English. As a result, the same immigrants’ grandchildren likely speak English only.

Linguists call this phenomenon “the three-generation pattern.” In essence, it means that non-English languages in the U.S. are lost by or during the third generation.

We can see this pattern playing out in data from the Pew Hispanic Center. Surveys show that in 2000, 48 percent of Latino adults aged 50 to 68 spoke “only English” or “English very well,” and that 73 percent of Latino children aged 5 to 17 did.

By 2014, those numbers had jumped to 52 percent and 88 percent, respectively. In other words, the shift from Spanish to English is happening nationwide, both over time and between generations. 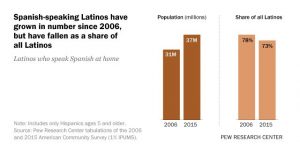 Language shift is not a naturally occurring phenomenon. Rather, it is a consequence of cultural forces that pressure speakers to give up one language to get another. These forces include restrictive language laws that formally prohibit the use of Spanish in educational or government settings, as Farmers Branch, Texas, did for 11 years.

There, they learn that academic success is achieved in English. As a result, first-generation children expand their vocabularies and literacy practices in English, not in Spanish.

They may also encounter negative attitudes toward Spanish from teachers and peers. For example, in October 2017, a New Jersey high school teacher was caught on video reprimanding three students for speaking Spanish, encouraging them, instead, to speak “American.” That no such language exists is beside the point – her message was clear.

Social pressure to speak English is so great that Latino immigrant parents may notice resistance to using Spanish at home as early as kindergarten. A generation later, though grandparents may continue to use Spanish in the home, grandchildren will often respond to them in English.

Indeed, when I ask my own Latino students about when they speak what to whom, the answer is almost always the same: Spanish with elders, English with everyone else.

This pattern seems to hold in small towns and big cities, on the East Coast and on the West, and in towns with large and small Latino populations. From Chicago to Southern California, children of Spanish-speaking immigrants become English-dominant.

The Spanish-to-English shift even occurs in Miami, where over 65 percent of the population is Latino and where speaking Spanish has clear economic benefits. That’s why Miami struggles to find enough Spanish-speaking teachers to staff its public schools.

English on the rise

Spanish isn’t the only immigrant language that has struggled to keep a foothold in the U.S. Germans, Italians, Poles and Swedes went through similar language shifts in the 19th and 20th centuries. These languages, too, were sometimes seen as a threat to American identity in their time.

Then as now, American anxiety about the role of English in U.S. society was totally unfounded. In the roughly 150,000-year history of human language, there has never been a more secure tongue than English.

More people worldwide do speak Mandarin and Spanish as their first language. But with some 400 million first language speakers and more than 500 million adoptive English speakers, English has a global standing enjoyed by none of the roughly 6,000 other languages spoken worldwide. It has been that way for about half a century.

If Latino immigration declines markedly in the U.S., language shift may actually lead Spanish to disappear across America. English, on the other hand, isn’t going anywhere fast.

Phillip M Carter is associate professor of Linguistics at Florida International University. This article was originally published on The Conversation.