Hispanics borrow words in English and transform them. For example, one might overhear someone saying in Spanish that their back hurts and hear the word “estrechear,” which takes the English word to “stretch,” adds an “ar” ending used to make a verb into an infinitive, and pronounces it in Spanish. 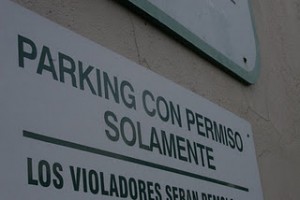 Then there’s just pronouncing existing English words with Spanish sounds. For example: With the word “shopping,” the “sh” becomes “ch” and the vowel “o” as in “opus” and the “ping” is like “peen”. The “mall” with Spanish phonology is “mol” with the vowel from “old.”

Also, “junkyard” starts off with a “y” sound, goes on with the “on” from “only” and finishes, roughly, with the sound of the first three letters of the name “Karen.” With the English word “carpet,” the Spanish vowel “a” is added – even though the more common meaning of “carpeta” in formal Spanish is binder or folder. In “push” – as in push or punch the key on a phone – the “sh” in push becomes a “ch” and there is the addition of the ending “ale” (sounds like ah-leh), which is equivalent to the pronoun “it.” Thus, press or push it becomes “púchale.”

With Spanish phonology, “bills” (the kind we pay) becomes, roughly, bee-less, and a “ride” (in a car) gets a rolled “r” and the “d” sound is deleted to arrive at “rai” (rhymes with bye). The word “back” in the phrase “call me back” is (mis)translated literally as “atrás” – meaning behind.
So, is all that a language, a dialect or a strange mix of multiculturalism? In a word, that is Spanglish, a mix of Spanish and English.

For some, Spanglish represents the sure and irreversible result of bilingual societies. For others, it is an aberration, which is what it has been called several times by Víctor García de la Concha, former head of the Royal Spanish Academy, the institution that sets standards for Spanish, and by Humberto López Morales, secretary of the Association of Spanish Language Academies.

But for others Spanglish is a sort of lifeline, a means of adaptation, which slowly incorporates English phrases or words.

Meanwhile, despite the criticism, millions of people with knowledge of English and Spanish will continue using the popular creations: “Click” gets a Spanish pronunciation, plus the ending “ando” –equivalent to the “ing” that marks an English gerund or participle. Similarly, “chatting” becomes “cha” (with the vowel as in “ma”), plus “te” and “ando”; “mouse” pronounced in Spanish is be identifiable (although literally the rodent would be “ratón,”), and for “flirting,” “ando” is again attached to the base form of the verb to get: “flirteando” – with the neighbor.