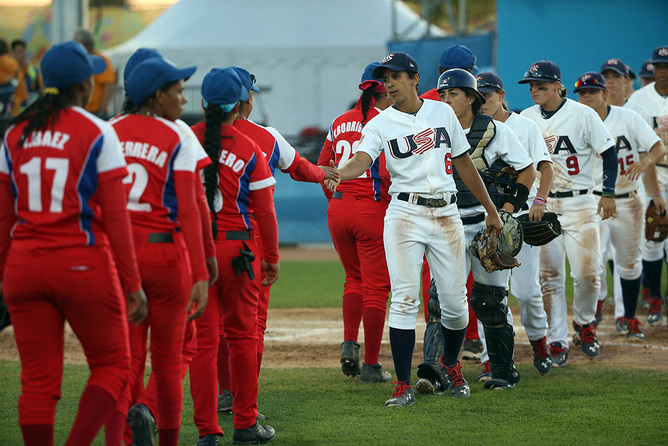 By John Affleck
The Conversation

Every few days, it seems, there is news about a new way in which Cuba and the United States are trying to heal more than a half-century of animosity, dating to the rise of Fidel Castro’s communist regime on the Caribbean island.

Since Halloween, for instance, we have learned that baseball officials from the US and Cuba are in discussions about creating a system whereby Cuban players would be able to play up north without defecting. Major League Baseball selected the Tampa Bay Rays to play a couple of exhibition games in Cuba during spring training next year, pending approval of the two governments.

And a goodwill tour of Cuba this week by MLB officials and Cuban defectors will include Los Angeles Dodgers star Yasiel Puig and Chicago White Sox first baseman Jose Abreu, who will be allowed to meet with family members they had to leave behind when they journeyed to the United States.

On top of all that, the baseball team from Penn State, where I run the sports journalism program, traveled to Cuba over Thanksgiving week and became the first US college team to play clubs from Cuba’s top league, the National Series. The Nittany Lions went 1-3 on an exhibition tour that included close losses to Havana’s famed Industriales and the defending league champs from Ciego de Aviala. The University of Richmond will follow suit this week with a similar series of games.

The overall lesson of all these visits and gestures is that it makes sense for both sides to use sports – and baseball in particular, which is rooted in each country’s sense of identity – as a tool to build closer diplomatic and economic ties, a process that began a year ago this week

For the Penn State baseball trip, I had the chance to lead a team of students and faculty from the John Curley Center for Sports Journalism to Havana to cover the Nittany Lions’ exhibition series. Through a partnership with the Pennsylvania NewsMedia Association, the content the students produced was used in print and on newspapers’ websites.

What immediately jumped out to us was that our presence was a serious matter – a big deal that seemed to carry implications beyond the games themselves.

Upon arriving on our first full day at Estadio Latinoamericano, the nation’s most famous ballpark, several Penn State officials immediately went into a formal meeting with Cuban baseball executives, where the rules of the series were outlined and both sides declared themselves honored to be in their roles, both as hosts and guests. Out on the field, the stadium scoreboard didn’t say “Penn State” in the spot for the visitors. It read “USA.”

In a Q&A session with Penn State players, Rodolfo Puente, vice president of the Cuban Federation of Baseball and former national team shortstop, struck a notably conciliatory tone when the subject of defectors inevitably came up.

“I’m very happy because this talent was formed in Cuba,” he said.

Meanwhile, when we visited the Esqunia Caliente, or Hot Corner, a spot in Havana’s Parque Central where baseball is always the main topic of conversation, fan after fan whom I spoke with basically reiterated the same message: our governments didn’t get along, but we always respected you and your players. We should be able to play each other without restrictions. The Nittany Lions won some fans during their visit to Cuba. Kelsie Netzer/John Curley Center

The message and the precedent

Of course, it would be silly to draw grand conclusions from one’s first trip anywhere, let alone a place as complicated for Americans as Cuba. But when combined with larger developments, it’s clear the two sides are using baseball as way of mending their relationship.

There’s precedent: sports has a history of affecting change beyond the diamond. The most obvious example is Jackie Robinson’s integration of baseball, but don’t forget the ping-pong diplomacy of the early 1970s between the United States and China. Or, more recently, the impact of the NFL – even if was belatedly – putting its financial muscle behind the National Domestic Violence Hotline, dramatically increasing the calls it can take.

The US State Department itself acknowledges the power of athletics through its sports diplomacy initiative.

Also, there’s this: despite its moves to ease restrictions on contact with Cuba, the Obama administration – not to mention all the US corporations that would like to get a toehold down there – is faced with the fact that it is Congress that ultimately has to lift much of the anticommunist economic embargo that has been in place for decades. The Republican leadership in the House and Senate appear to have little interest in that move.

But if MLB executives and owners, not exactly a group synonymous with the word “liberal,” can figure out a way to play ball with the Cubans that is acceptable all around, then a larger question would have to be answered: what are we all so afraid of?

A final lesson we picked up in Cuba is that, as Washington and Havana do their courtship dance, time is not standing still.

Cuba has already opened itself up to the world. The sense in the street is not of some Eastern Bloc holdover but of an evolving, if struggling, economy – a place in need of capital and certainly ready to use it.

Again, sports offered an insight into the state of Cuba today. What we noticed is that for all the talk of baseball as the national sport – Castro himself liked to pitch when he was a young man – we often saw children playing pickup soccer games. And, at the baseball stadiums, there were fans in Real Madrid jerseys and wearing Lionel Messi’s Barcelona gear or his Argentine national uniform. One student, Gabrielle Chappel, began to ask around about it and learned soccer has been growing in popularity – particularly among the young, who want something new – as Cubans have been exposed to more international matches.

The message for Americans is that, while it may be easy to think of Cuba as isolated, it’s not. It’s only been isolated from the United States.

Now, a new Cuba is emerging, one that even embraces soccer. That process is already well under way. The only real debating point for the US is whether it wants to be part of the transformation or not.