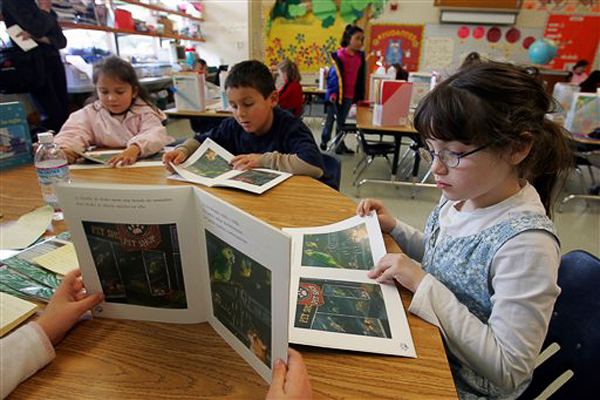 If faced with an unknown word, young readers in the United States are often advised to “just sound it out.” When using this strategy to help decode written words, learners rely not only on knowledge of letters and sounds but also upon the understanding that each word can be broken down into component sounds, or phonemes.

No, suggests a new study by Stanford University Professor Claude Goldenberg and colleagues, to be published in American Educational Research Journal.

Learning about how individual sounds make up spoken words—phonemic awareness—is a cornerstone of beginning reading instruction in the United States. When teaching kids to read in English, it is standard practice to begin in kindergarten and early first grade by teaching them the sounds of the words independent of the letters: for example, “cat” consists of three sounds (k-aa-t).

The study shows that Spanish-speaking students achieved reading comprehension in Spanish without such instruction, raising questions about the approach being used to teach a growing number of Spanish-speaking children in the United States to read in Spanish.

Rather than a one-size-fits-all approach to reading, US educators should reconsider their focus on phonemic awareness for students receiving early literacy instruction in Spanish, says Goldenberg, who is on the faculty at the Stanford Graduate School of Education.

While there has been much research about the benefits of phonemic awareness for beginning reading instruction in English, Goldenberg says that the study cautions against uncritically generalizing findings beyond the particular population being studied.

“Here’s a specific instance of where reading policy and practice has been very markedly influenced based on a context—English-speaking kids learning to read in English—that is not all that general,” he says. “We need to be aware of the assumptions we’re making when we take findings from one linguistic context and apply them to another.”

TEACHING IN MEXICO AND THE US
For Goldenberg, who was born in Argentina and grew up speaking Spanish, the topic is personal. He taught junior high and first grade for several years in predominantly Latino neighborhoods of Texas and Southern California and has long been concerned with challenges Spanish-speaking learners face in the US education system.

The researchers note that reading instruction looks quite different in the two countries. In the United States, beginning reading pedagogy has been strongly influenced since the 1980s by phonemic awareness research.

The Reading First framework, adopted as part of No Child Left Behind in 2001, recommended an increased focus on phonemic awareness beginning in kindergarten. As reforms spread through the nation, these recommendations affected instruction even in districts where students were learning to read in Spanish.

In contrast, early reading instruction in Mexico does not place such an emphasis on phonemic awareness—the understanding that spoken words can be broken down into their constituent sounds.

In light of these differences, the researchers wanted to compare the children’s achievements in reading over time in Mexico and the United States.

At the beginning of first grade, the children in Mexico scored much lower on reading and phonemic awareness assessments than their Spanish-instructed peers in the United States, who received considerable phonemic awareness instruction in kindergarten and on into first and sometimes second grade.

What might explain the reversal? Previous researchers, mostly in Mexico and other parts of Latin America, had hypothesized that phonemic awareness may be less important for students learning to read in Spanish than in English.

For one thing, in Spanish, the relationships between letters and their corresponding sounds tend to be more consistent, whereas a single letter in English can represent a range of different sounds that must be learned.

In addition, these researchers, whose work has been largely ethnographic and observational, found that early readers in Spanish seemed to be focused at the level of the syllable. (A syllable can have one or more phonemes; in Spanish, for example, while the word pipa (pipe) has 2 syllables—pi and pa—it has four phonemes, two in each syllable: p – i and p – a.)

“They don’t see kids really dealing with phonemes, and they see phonemic understanding as an outgrowth of actually learning to read,” Goldenberg says.

More definitive answers about Spanish literacy will depend on future researchers taking up these questions with studies that randomly assign participants to experimental and control groups. Goldenberg says he hopes his work will propel the field to take that next step.

Meantime, these insights are influencing Goldenberg’s current project, a collaboration with Stanford GSE doctoral student Elliott Friedlander. They are conducting a randomized control trial with a professional development program aimed at improving literacy instruction in Rwanda.

Goldenberg adds that this study’s findings do not address whether kids who learn to read in Spanish and are taught phonemic awareness have an easier time learning to read in English. “There are arguments for both sides,” he says. “It’s another great question for a study.”

The study was co-authored by Leslie Reese from California State University-Long Beach; Tammy D. Tolar and David J. Francis from the University of Houston; and Antonio Ray and Rebeca Mejía-Arauz from ITESO University, Guadalajara, Mexico. The National Institute of Child Health and Human Development funded the study.