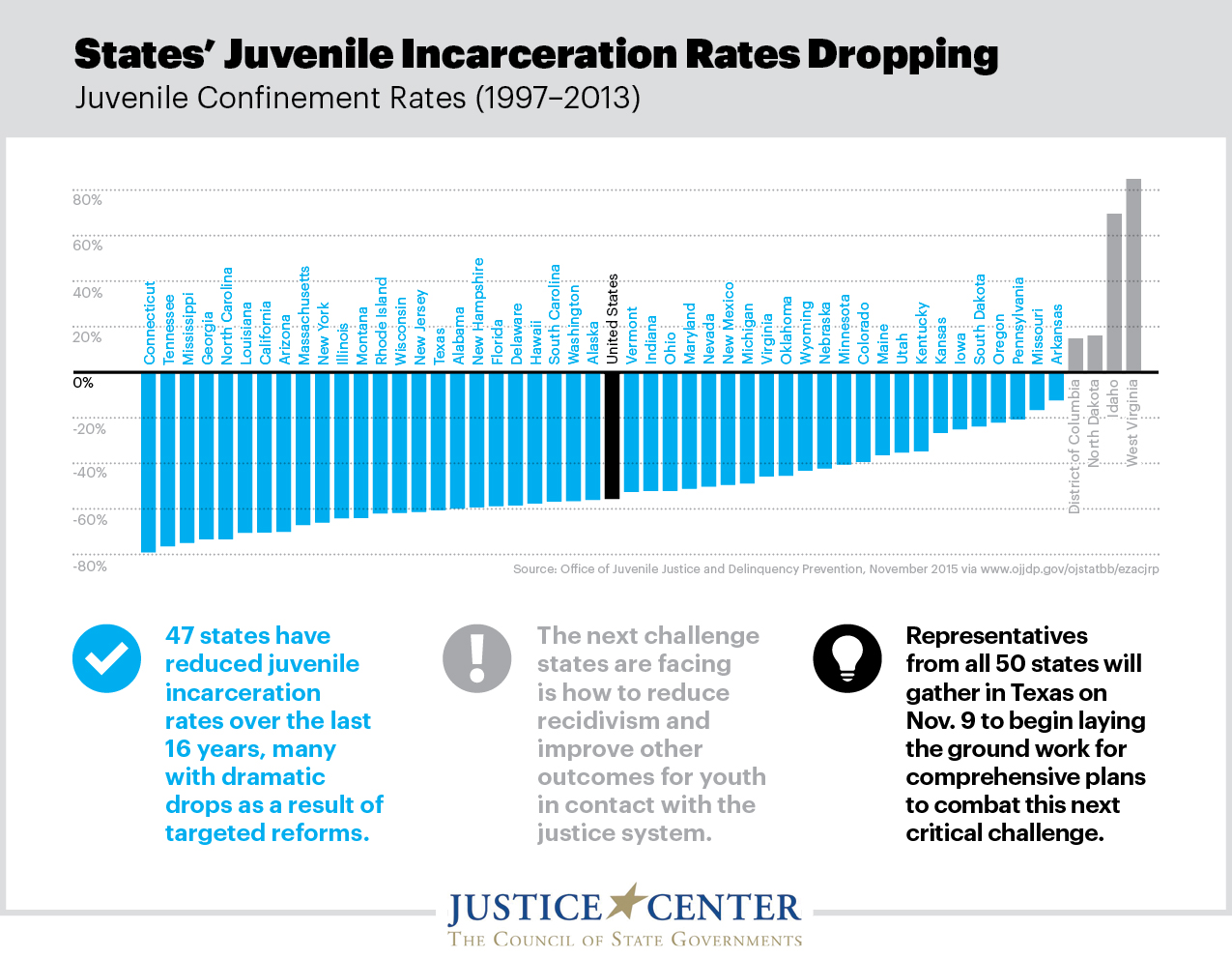 When juvenile justice leaders gathered in Texas earlier this month, policymakers from the Council of State Governments greeted them with some good news and some troubling news.

First, the good news: Between 1997 and 2013, the juvenile justice incarceration rate declined steeply in nearly every state and by 55 percent nationwide, according to federal data.

Not so good: Rearrest rates are high, sometimes reaching 80 percent in certain states, according to the council.

The discrepancy is a signal that as states work to reduce juvenile incarceration rates, officials also should look for ways to improve the lives of youth after they return to their communities, say researchers and policymakers.

States should know whether youth flounder or flourish and use the best policies available to help them succeed, said Josh Weber, the juvenile justice program director at the center.

“At the end of the day, the goal of the juvenile justice system should be to prevent further contact with the system,” he said.

The teams from each state included legislators, judges, juvenile justice agency representatives and other stakeholders interested in the next wave of reforms.

Some states already have plans in place to track and improve youth outcomes. Others are just getting started. But Weber sees interest across the country as states celebrate the drop in incarceration and confront stubborn rearrest rates.

“I think this is a wake-up call for the states,” Weber said.

At the forum, the federal Office of Juvenile Justice and Delinquency Prevention made clear its own interest in youth outcomes.

Administrator Robert L. Listenbee announced the agency expects to provide funding for states to implement plans to improve youth outcomes. A grant solicitation will be released soon, he said.

“These kinds of plans, this kind of progress, are going to take time. It’s not going to happen in one year. We need to have that baseline so we know whether we’re going forward,” he said.

Listenbee said plans should establish baseline recidivism rates and targets for improvement, align research and practice, and demonstrate support from various levels and branches of government.

Susan Burke, director of juvenile justice services in Utah, said a key lesson for her from the forum was to think comprehensively about youth outcomes.

Recidivism is a critical measure of what happens to youth, but factors such as graduation rates, substance use, peer relationships and job training also matter, she said.

No matter what the states do, Burke said adolescent brain science research should help guide reforms.

“We have to take a development approach to our practices, to our services, to what our idea of what youth delinquency is all about,” she said.

The Council on State Governments will provide technical assistance to states that still are designing plans to improve youth outcomes.