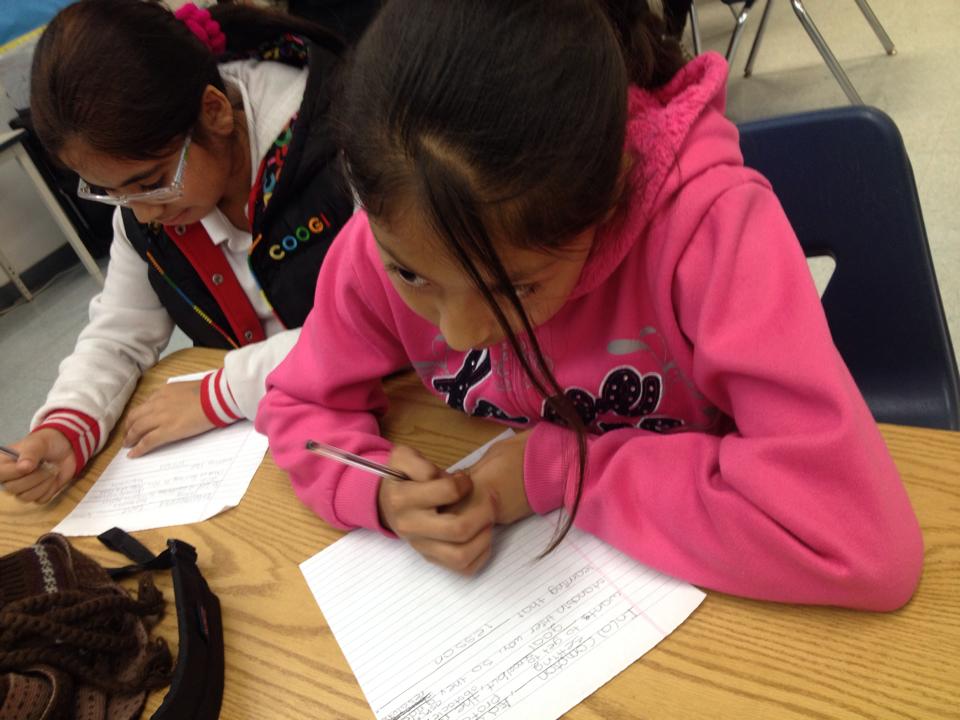 Language Magazine: What is the history and overall goal of the Young Storytellers Foundation?

Pilar Alvarez: The Young Storytellers Foundation was started in 1997 by a group of film students in response to budget cuts in LA public schools. The founders wanted to bring in a program that was absolutely free, something that any public school could have regardless of its funding, which is why they created our volunteer-based Script to Stage program, where we bring in ten adult mentors who work with ten fifth-grade students.

Over ten weeks, each of those students will create their own screenplay. Screenwriting is the vehicle we use for building the soft skills that we think are important for literacy. Our program is about building academic and creative confidence and really just getting kids excited about writing.

A really important thing for Young Storytellers is that the kids delegate the content. They are able to write about whatever they want to write about. Obviously we have some limitations, because we’re working with ten-year-olds and we’re in school, so we don’t want to have violence, but we actually pose that as more of a challenge. Young Storytellers believes in non-violent, creative solutions to problems.

LM: Can you tell us more about the Big Show?

PA: Every student gets to see their work performed by professional actors, and all of our young writers cast their actors. For the first hour, the actors, the mentors, and the writers will all play games. Then, the actors all get one to two minutes to audition for the kids. Usually the head mentors give the actors a heads-up as to what kinds of characters are in the screenplays so they can prepare for auditions, but our kids our insanely creative.

I’ve been in a couple of Big Shows, and the last character I played was an animatronic chicken. A lot of actors who have done a couple of big shows will say, “Last time I was an angry grizzly bear,” or a “piece of trash that came to life.” The actors then perform pretty much on the spot.

We don’t have props and we don’t have costumes, which is an opportunity for the kids to see actors with just their bodies use their imaginations to create everything in the screenplay. It also helps us not limit the kids and show them that you can have anything. You can have a spaceship going off into space.

Don’t worry about creating that spaceship. The actors will do that. We like to use actors that can physically improvise, not the actual lines because we want to stay true to what’s been written by the kids, but someone who can make bold choices in a short amount of time.

LM: How many students do you typically have in one Script to Stage ten-week program, and is it always fifth graders, or do you do different grades?

We have the teachers select who participates, and we tell them that we want to work with kids who are normally not in the spotlight, who would benefit from a one-on-one experience. We have a set curriculum, but having that one-on-one mentor who can adjust what they’re doing based on the needs of the writer they’re working with is a really important component of the program.

Sometimes it’s a lot of introverted and shy kids who need that one-on-one person to help build their confidence and structure their ideas.

LM: What is the Movie Makers program?

PA: Movie Makers is the middle school YSF program. Right now, it’s twelve middle school students who work in pairs to write screenplays and then make the movies of those screenplays. They do all of the preproduction, the planning, create the shot lists, the storyboards, and they direct professional actors.

In Script to Stage, participants cast the actors but they don’t have time to give them direction. In Movie Makers, students also do the majority of the postproduction work, except for the editing, because we found that to be a challenge.

The middle school program is focused on collaboration and building leadership skills, because they’re working in pairs but also directing and leading others. When working on a film set, you have a clear plan of what you’re going to do, but something always comes up — there’s always a wrench thrown in the plans — and the kids have two weeks to shoot their movies, so they have a limited time and we teach them to accomplish something on a deadline.

LM: How does the program specifically choose schools to work with? Do you look for schools that are lacking arts programs, or do the schools seek you out?

PA: It’s a combination. Sometimes schools do seek us out. Our goal is to work with kids from fifth grade to middle school, and we’re currently working on developing a high school program, so as we are adding schools we’re looking for middle schools that feed from elementary schools we are already working with, or a high school that feeds from a middle school we’re already working with. We don’t only work with Title 1 schools, but it is a priority that we want to work with schools that don’t normally have access to the kind of program we’re providing.

LM: Back to the Big Show, do they usually have an assembly so that other students can see the work involved with the program?

PA: Yes. The assembly usually includes all the other fifth-grade students, so the writers’ peers, and fourth-grade students. It’s really awesome to see how the students are viewed by their peers after the Big Show, especially some of the more introverted or reserved kids, the people who wouldn’t necessarily share in a large group.

At the Big Show, before each screenplay is performed, the young writer and the mentor introduce the writer’s screenplay, and the writer will say what inspired them to write their screenplay so that the audience really connects the piece of work with the writer.

The writers are really the rock stars of the Big Show. Before the Big Show even begins, they walk down a red carpet. Sometimes the actors and mentors will take out their smartphones and put the flash on and pretend that they’re paparazzi taking pictures of them. They all have VIP badges, and there are multiple standing ovations for the writers.

That’s what really sold me. It felt like a true celebration of the creative work of these young people and an amazing confidence-building experience for them.

LM: What does Young Storytellers have in the works for the near future? You mentioned a high school program, anything else?

The Script to Stage program is geared towards building confidence and getting kids comfortable actually sharing their voices one on one with their mentors and in a group. The Movie Makers program is geared toward working with others and developing as leaders, but in the high school program, we have the students do more of a personal exploration where they identify their own personal values or explore their families’ ethnic heritages.

In one portion of the high school program, the kids will make a short film inspired by that personal exploration. Then, in another portion of the program, all of the students work together as a group to identify a social issue that is important to them and create a short documentary around that social issue.

A big part of getting young people to discover the power of their own voices is to help them develop informed voices based on what’s going on around them.

LM: Can you tell us how you got involved in arts education?

PA: I started off as a teenage theater kid, and I went to a small liberal-arts school and majored in theater performance. What I loved about theater was the direct impact that you have on your audience. I became really passionate about theater when we were doing plays that I felt were addressing themes or social issues that I thought were important and could potentially raise questions for the audience that we were performing the pieces to.

The more that I was doing professional theater, the more that I found that we were performing plays to a very insular group of people who all held the same values, and it was like preaching to the choir. We would all come away from a performance and pat ourselves on the back and think the same way about whatever issue we were addressing in the piece, which to me was frustrating because I wanted to feel like we had impact, or at least were leaving a production with some sort of interesting debate.

I started teaching young people, and could really see a direct impact. I saw kids become more confident and start sharing more because of a theater-performance class. Kids built teamwork skills, because when you’re working on a theater piece with a group of people, you all have a common goal together.

I was a theater arts teacher for a while, and then I decided to take a more administrative track. Before working with YSF, I worked for LA’s BEST as an art coordinator, and that experience taught me a lot about working with structures and getting things done under the umbrella of LAUSD (Los Angeles Unified School District), which is a large beast. Then, I decided that I didn’t want to work with such a large organization, because it gets harder to keep the quality of the work you’re doing at a certain level the more spread out you are.

My mentor at the time introduced me to the executive director of Young Storytellers, and I found that it was a really good fit, because I was passionate about working with kids to create and perform their own content. I went to one of the Big Shows and I was sold.