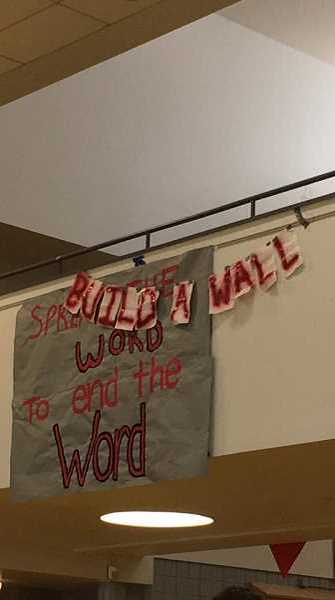 This election season, it has become common to read about candidates’ anti-immigrant rhetoric trickling down into schools and, in many cases, being used to insult Latino students. Over the past several days, the polarizing phrase “build a wall” — presumed to be inspired by Republican presidential candidate Donald Trump’s immigration plan to curb illegal immigration across the U.S.-Mexico border — has been making headlines in Oregon, as it has inspired hundreds of students to walk out of their schools in protest to what they feel is widespread anti-Latino sentiment.

“The Latino community has been experiencing racism and discrimination for far too long,” 17-year-old Edith Garcia told The Oregonian after she had organized a mass student protest from Pioneer Courthouse Square to Portland State University Monday that united hundreds of students from area schools, both public and private.

The Portland protest was inspired by a similar outcry at nearby Forest Grove High School last week after students put up a “Build a Wall” sign in the cafeteria that prompted Latino students to walk out of school, chanting and singing.

This episode was the latest racially charged incident at Forest Grove that, as an article in the Portland Tribune states, “represents a clash between those who regard such messages as free speech and those who believe they are blatant bigotry.” According to the article, the high school is about 50 percent Latino.

Though school officials said the students who hung the banner — over another sign asking students to stop using the word “retard” — were disciplined and have apologized, that didn’t stop the protesters’ message from spreading. Students at three other high schools also organized walk-outs and took to social media to share the message using #StandupFG. 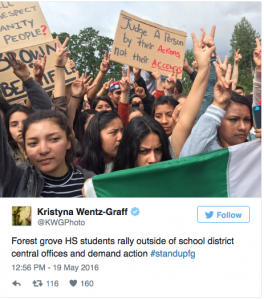 The rallies have been about more than just that one offensive banner, an activist told the Tribune, calling the incident “the last straw.”

“A series of events have occurred before at Forest Grove High School, such as a teacher being called the N-word and students being pushed around and people saying things like ‘Go back to your country, we don’t need you here.’ It was obviously something that was bottled up,” he said.

One of the students who hung the “build a wall” banner has since apologized in an anonymous post online, admitting he or she does not actually believe that a wall needs to be built on the border and was just trying to do something “provocative” to protest freedom of speech restrictions. You can read the full letter here.

education, Latino students, student protests
Previous Post Texas Latino school children just got the biggest slapdown from the one state agency supposed to be their strongest advocate
Next PostChicano filmmaker tries for a do-over to raise enough cash for doc before gentrification claims all signs of Latino presence