“Texans on wrong side of border fence grow anxious.”

Here is an excerpt from Christopher Sherman’s article for the Associated Press: 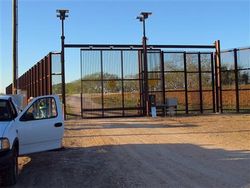 “Max Pons is already anticipating the anxiety he’ll feel when the heavy steel gate shuts behind him, leaving his home isolated on a strip of land between America’s border fence and the violence raging across the Rio Grande in Mexico. For the past year, the manager of a sprawling preserve on the southern tip of Texas has been comforted by a gap in the rust-colored fence that gave him a quick escape route north in case of emergency. Now the U.S. government is installing the first gates to fill in this part of the fence along the Southwest border, and Pons admits he’s pondering drastic scenarios… In this lush area, the Rio Grande’s wide floodplain precluded building the fence right on the border so it was set back more than a mile in places, running behind the levees. The result is a no-man’s-land of hundreds of properties, and the people who work on them, on the wrong side of the divide. The arrival of the gates will reveal whether the government’s solution for this border fence problem will work. Can sliding panels in the fence controlled by passcodes allow isolated workers to cross when they need to while keeping intruders out?” Link to Full Article

Analysis: I knew before I traveled to south Texas for the tail end of my October book tour that the border fence didn’t follow the riverbank, and was off set by a bit. I made arrangements with the McAllen Border Patrol station to take a tour of the sector, and finally saw it for myself. For some reason, I was under the impression that the areas between the fence and the riverbank were empty; just grassy areas and sugarcane. I couldn’t believe my eyes when I saw entire farms and homes!

I can completely understand Max Pons’ apprehension about his living situation. Anyone who’s seen the National Geographic Channel’s “Border Wars” episodes filmed in the Rio Grande Valley (RGV) knows this is one of the border’s busiest – and most dangerous – sectors. It’s a non-stop flow of immigrants and dope smugglers who bring their people and product across the river into this no man’s land, then find a way over, through, or around the fence. But as the article’s author asks, can the remote-control fence gate idea actually work?

I’m not an advocate of a 2,000 mile-long fence that extends the entire border; I think it’s a waste of taxpayer money to place such an expensive barrier in areas where not even animals are crossing due to the heat and desolation. But I do believe in the effectiveness of the fence to act as a deterrent along certain stretches. I say deterrent because the border fence was never designed to stop anyone. But it does allow the US Border Patrol more time to respond to border incursions, which is the ultimate point.

But the situation in south Texas is a bit different. I can verify that Border Patrol agents do rove in vehicles on both sides of the fence, and I have seen the gates in action. They’re not super-fast. I’ve also seen parts of the fence where smugglers in vehicles have rammed the fence and dislodged parts of it enough to get people through.

The thing that concerns me is, when Border Patrol rushes to respond to a border incursion at the fenceline at other parts of the fence, generally US citizens are not in immediate danger; if smugglers or immigrants manage to evade escape, then it’s mostly a really frustrating moment for the agents, who hope that state or local law enforcement can pick them up somewhere later on. But in the case of Max Pons and his neighbors, if their homes are being burglarized or, as he worries about, if they’re held hostage in exchange for the fence code, can the Border Patrol respond fast enough?

Honestly, it’s tough to imagine an ideal solution. I have to acknowledge that south Texas is one part of the border where a fence is needed due to the inordinately high volume of drug and human smuggling. However, because of the logistical impossibility of building the fence along the riverbank, Americans and their properties lie extremely exposed to the dangers inherent to living in such an area.

I’m curious as to other people’s thoughts on this situation, and would love to hear from you…especially if you live in south Texas and know anyone whose property lies south of the fence.