Mom’s Clean Air Force has been highlighting the alarming disparities in the amount of air pollution among diverse communities. The fact is: the browner and poorer the community, the poorer the air quality. 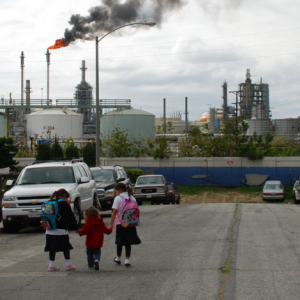 A new study indicates that the differences in air quality among communities of color is even worse than we thought. Not only is there more air pollution in low-income, non-white communities, but pollution is more hazardous. According to a Special Series Report by Environmental Health Sciences:

“The greater the concentration of Hispanics, Asians, African Americans or poor residents in an area, the more likely that potentially dangerous compounds such as vanadium, nitrates and zinc are in the mix of fine particles they breathe. Latinos had the highest exposures to the largest number of toxic ingredients, while whites had the lowest.”

Citing a Yale University study, the report states that communities of color and those with low education, high poverty and unemployment, face potentially greater health risks even if their air quality meets federal health standards. The study looked at particulate matter, also known as PM2.5 or soot. This dangerous mixture of emissions from diesel engines, power plants, refineries and other sources of combustion, penetrates deep into the lungs and wreaks havoc on people’s health. Yale researchers point out that some fine particles are more harmful than other types of soot. And depending on what polluted area you live near, your exposure can be more toxic than someone who lives elsewhere.

The different particles people breathe include different kinds of metals and chemicals, depending upon their source. The folks living, for example, near refineries are exposed to more nickel and vanadium, while those near coal-fired power plants take in particles with higher sulfate content. For neighborhoods located along busy roads, more nitrates from vehicle exhaust is in their air.

The study found that certain communities of color were more likely to be exposed to certain substances. Latinos had significantly higher levels of 11 substances, which include 1.5 times Caucasian’s exposure to nickel, nitrate, silicon and vanadium. Greater exposures were found among Asians also to nickel, nitrate and vanadium. African-American neighborhoods showed significant exposures to four compounds, among them sulfate and zinc.

Studies have established how particulate matter negatively affects health and wellness. The report reminds us that in cities worldwide, on days when particulates are high, more people die from cardiovascular disease and respiratory problems. The EPA says there are thousands of studies connecting long and short-term exposure to particulate matter to health problems, including premature death, cardiovascular disease, and asthma and other chronic respiratory disease in children. Even though less is known about the health risks of some of the individual components, we do know that sulfate can trigger asthma attacks; vanadium irritates the lungs; nitrate causes inflammation that may lead to heart attacks or strokes; and nitrate, zinc, nickel, carbon, selenium and silicon have been implicated in increased cardiovascular deaths.

EPA has proposed more stringent standards for particulate matter. These standards are limited to emissions from coal-fired power plants. This is an important start. While certain communities bear the brunt of ill effects from all types of pollution, soot pollution affects us all. And when everyone advocates for those most affected by dirty air…everyone benefits!

TELL THE EPA THAT YOU SUPPORT STRONGER LIMITS ON SOOT POLLUTION!