The Godzilla In The Room: Climate Change 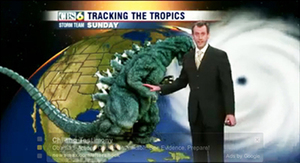 The use of comedy and satire to inform and challenge has a long tradition. Before Lenny Bruce was taking on political issues, Aristophanes was writing about the futility of the Peloponnesian War in his play Lysistrata.

Now, a new video has gone viral with over 1,200,000 views. It takes on climate issues using an entertaining spin for a topic that is far from amusing. Posted by FakeNBC12, which describes itself as “the best fake news Twitter account in Richmond, Virginia,” weatherman, Aaron Justus gives a forecast that is sure to be remembered…

It’s a very entertaining piece, except for the fact that the ironies may be missed by many of the million plus viewers.

My first awareness of the importance of weather and climate change came when I heard Van Jones speak at the Personal Democracy Forum in 2008. He quoted James Hansen, known as the “grandfather of global warming,” who has been sounding the alarm that the planet is at the last moment to shift to a dire outcome. Jones recounted the devastation of Hurricane Katrina, the California wildfires brought on by drought, the Iowa breadbasket under water, and the tornado that had traveled through downtown Atlanta. He suggested that the scariest channel on television was the Weather Channel—a source of information on the disasters to come. His take-away was to build a green economy to beat global warming, and seek economic solutions in a “green New Deal.”

This year, Hansen addressed a TED conference with a talk titled, “Why I Must Speak Out About Climate Change.” In this basic primer, Hansen clarified the greenhouse effect, global warming, and how both excessive rain and drought add to the earth’s energy imbalance. His explanations help to make sense of the current stats showing that the past year has been the warmest twelve months in the United States since 1895—when official records started being kept. He spoke of the Monarch butterfly being extinct by 2099, droughts and floods leading to famine, and a “…climate system spiraling out of control…The science is clear.”

The absurd extremes of the weather video are reflected in real occurrences that are ravaging the country. They include the dry June conditions that have adversely affected Utah, Colorado, and most severely Wyoming—to the wet June that left Florida with more than 24 inches of rain in some locations.

Losing mass in Greenland and Antarctica may seem far away. However, in our capitol city of Washington, D.C. there was an eleven-day heat wave from the end of June through the Independence Day holiday. You would think that on June 29, the hottest day of the month when the mercury hit 104 degrees, our elected officials would take notice.

It doesn’t seem likely that the 112th Congress is going to take any initiatives on counteracting these concerns. A June 18, 2012 report by the Minority Staff of the U.S. House of Representatives Committee on Energy and Commerce confirms that.

The Republican led House has voted against environmental legislation 247 times in the past 18 months. Constituents must start the ball rolling by reaching out to the top — the Democratic and Republican nominees for president — demanding they present a plan to the public on how they would move forward to end greenhouse gas pollution.

Why? Because no mom wants the Godzilla scenario to become their child’s future.

TELL THE PRESIDENTIAL CANDIDATES TO TALK ABOUT GLOBAL WARMING

35 years of Latino progression at University of Illinois at Chicago
1 Comment
Guatemala: U.S. artist shares his skill and love of stained glass art with Guatemala's Mayans