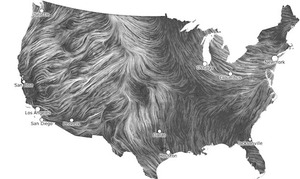 I still remember the first time I sprawled on my back across the grass and watched the clouds drift by. I was about four or five years old. I found animal shapes and people shapes, and excitedly pointed them out to my little sister. The afternoon flew by as the wind blew a parade of enormous cloud-balloons through the sky. I was thrilled.

Very 20th century. Clouds are one of the few ways we can see the wind at work, along with the bend of trees and the ripple of water. But this is the 21st century. Now, thanks to the brilliant and artistic work of Fernanda Viegas and Martin Wattenberg, who lead Google’s “Big Picture” visualization research group in Cambridge, Mass., we can watch the pattern of the wind, real time, translated as digital data on a U. S. map. And it is equally mesmerizing—and deeply moving.

The Wind Map is about as graphic as it gets in making a simple point: Wind connects us all. It is a huge force, moving in such enormous sweeps across our skies, that it overwhelms the boundaries we have thrown up, the ways in which we measure where we are—back yards, city limits, state lines. When I was a child, and the elephant cloud lumbered across the sky and out past the tree line, it was gone, as far as I understood. Now even a child can understand how the wind blows from Texas to Canada, and beyond.

Meanwhile, the adults are using the sky as a vast sewer. We are feeling the effects of global warming come on faster than scientists predicted: a staggering 15,272 daily high temperatures were set, across the country, in March. We are spewing air pollution laced with invisible poisons, like mercury, a potent neurotoxin and greenhouse gases like methane and carbon.

Because of the way the political winds blow, several very important regulations—the new Natural Gas Standards, the Cross State Air Pollution Rule and the Mercury and Air Toxics Standards — are under attack by politicians and lawyers representing organizations that don’t feel it is necessary to regulate air quality. You can see where that leads—just take a look at the air in India and China. Here’s the way the real winds blow: we are now measuring mercury from that horrific pollution in China in our own skies.

All you have to do, to understand why mercury pollution is a national (and global) problem, is overlay the wind map with pins planted in the places with the top 25 mercury emitting U.S. coal plants in the USA. Seven of the worst are in eastern Texas. But go ahead and put pins in Missouri, Alabama, Georgia, North Dakota, Indiana, Ohio, Michigan (see how mercury goes straight to the Great Lakes), Louisiana, Pennsylvania, Wisconsin, Minnesota, Arkansas, Nebraska and Wyoming.

Even a child can understand the profound lesson of the Wind Map. We share the air. As much time as we spend teaching children to share, we forget that lesson ourselves.

But here’s something children can teach us: nothing beats lying on your grass, feeling the earth beneath your body and gazing into the clouds overhead, and falling in love with our Earth. That joy in our interconnectedness is what we should be sharing.

Latina Cubicle Confidential™ — Do You Know What You’re Worth to Your Employer?
Comment
José Antonio Pantoja: Cuban artist turning brushes into oars of freedom