Latina Lista: News from the Latinx perspective > Columns & Features > BlogBeat > This Youth Worker in DACA Fears for His Future As He Helps Students in Similar Situation 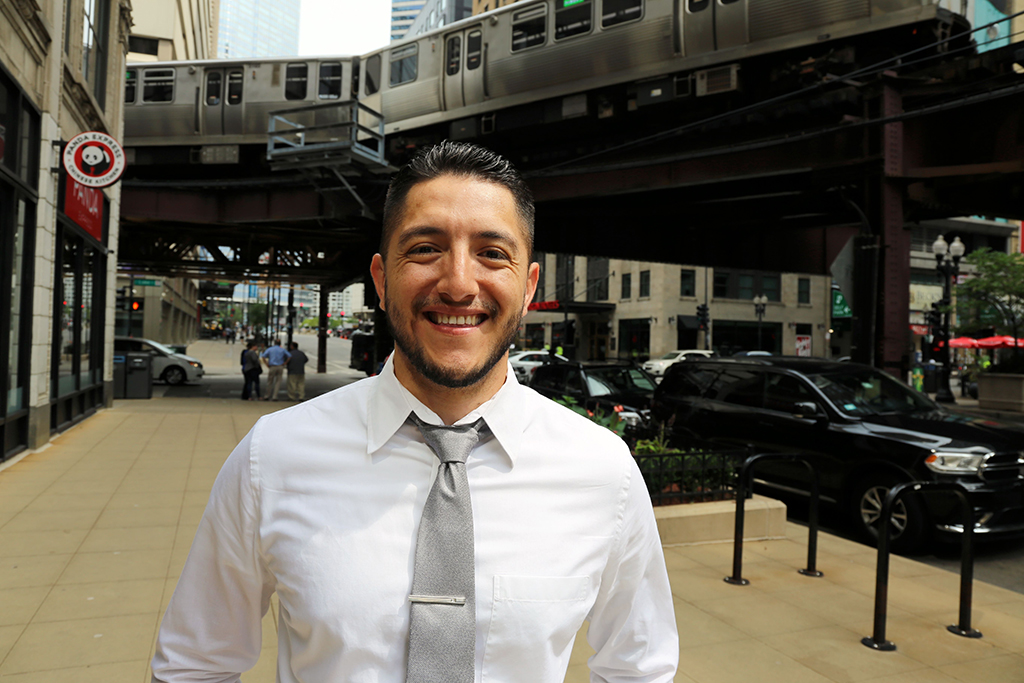 As an undocumented student, David Blancas had to push hard to shape his future.

He couldn’t drive without fear of being stopped. He couldn’t get on a plane without worrying about being detained.

But he dreamed of going to college, becoming a teacher and working with kids.

Today, as a staff member of the nonprofit OneGoal in Chicago, he inspires kids to expand their dreams and seek a college degree. He provides them with the tools to get to college and stay there — and he’s uniquely positioned to understand their situation.

OneGoal works within schools to prepare low-income juniors and seniors for college. It also provides support for them through their first year in college. It began as an after-school organization in Chicago but now also works in New York, Atlanta, Houston, the area around San Francisco and in Massachusetts, and reaches 13,000 students, according to its website.

Blancas, who came to the United States as a child, earned a bachelor’s degree from Aurora College in Illinois in 2009. Despite his success, his immigration status prevented him from teaching in a public school.

Then, in 2012 President Barack Obama issued the executive order for Deferred Action for Childhood Arrivals (DACA), which provided work permits and protection from deportation for immigrant youth brought to the United States as children.

“It opened a lot of doors,” Blancas said, who went on to get a master’s degree and become a math teacher in Chicago public schools.

On Sept. 5, 2017, DACA was rescinded by President Donald Trump’s administration.

Ironically it was the first day of school for Blancas’ young daughter. “It really hit me hard,” Blancas said.

As his child began her schooling — with her whole life opening up in front of her — he wondered what her future would, in fact, look like? How would his own future narrow?

Anticipating the loss of his teaching job, Blancas left teaching and went to work full time for OneGoal. Now he trains teachers and works with a cohort of students in their first year of college.

“I make sure they are still persisting in college,” he said. He checks in with them to see if they are following a clear pathway and if they know the resources available to them.

He estimated about 10 to 15 percent are undocumented.

Blancas said it is important to share his story with undocumented students today: “It really helps a lot.” They see that he was able to gain a college degree.

What youth workers can do

Blancas puts the students in touch with resources such as United We Dream, a nonprofit staffed by many young adults protected under DACA and that addresses the obstacles immigrant youth face. It also provides information about scholarships and about legal rights.

“Be prepared to have conversations with the students,” he said. “It’s going to be emotionally charged.

Adults may want to offer many resources and advice and urge them to take a specific path. “But it can be overwhelming for those students,” Blancas said.

Speak to them not as students but as people, he said. “Give them space … Don’t have a savior mentality.”

Students today may need time to process and figure out what they need. “Help them process the emotions.

“Once those conversations are happening, have that student lead you to where they want to go,” he said.

A coordinated approach with specific supports

As the political landscape shifts, OneGoal is providing students with up-to-date information.

“It’s important we are working in a coordinated way,” Connelly said. For example, local task forces in Chicago are advocating for immigrants, and high schools are holding various activities such as resource fairs, she said.

“We are also elevating the voices of our students,” she said. Both Blancas and a student tell their experiences on the organization’s website. The student, who was formerly mentored by OneGoal and is now a college senior, wrote anonymously that she was fighting to beat the odds of being a female illegal immigrant raised on the South Side of Chicago. She has worked hard to pay her own way through college and move toward her goal of becoming a pediatrician.

“I was too young to even remember coming to the United States,” she wrote. “This is my home, not Mexico, yet I am treated as an outsider in the very country where I have spent almost my whole life.”

She urged other students not to give up in their pursuit of their dreams.

Students are speaking out and becoming local leaders on their campuses, Connelly said. “That’s been profound,” she said. “I think the thing that is inspiring me is what our students are doing.”

Blancas pointed out that many DACA recipients are young adults now, working and raising families. These young adults have followed the American Dream but are now being locked out of it, he said. With discontinuation of DACA, they fear job loss and deportation, which would impact a whole new generation — their children.

“How can the country I love have so much hate for me?” he wrote.

Did far-right extremist violence really spike in 2017?
Comment
52 Harmful Acts in 52 Weeks: How the Trump Administration Hurt Communities of Color in 2017