A site was found in Ecuador that may be the tomb of Atahualpa, the last Inca chief. 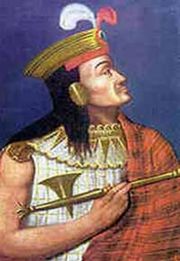 Athualpa was taken captive by the Spanish at Cajamarca, Peru and was executed by strangulation. The site where the tomb may be is in a massive complex in an area called Sigchos, south of Quito.

A complex of walls, aqueducts, stonework are in the Machay rural retreat. Machay means burial in Quechua. The design is late imperial and contains rectangular rooms set around a trapezoidal plaza. There is a walkway leading to stairs that form a pyramid that could be the tomb of Atahualpa. There is a channel of water cut from a waterfall called “the Inca’s Bath.”

The area was known as Atahualpa’s personal domain.