By Robert Kadar
This View of Life 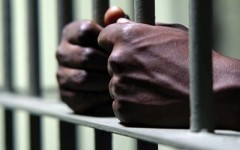 It is Black History Month and the airwaves and the print media are filled with self congratulatory reports concerning progress in black civil rights. Overall, the blitz of news gives the impression of a slow and steady march of rights gained as a result of the hard work of many dedicated and brave reformers, both black and white. But a reality check should prove beyond a shadow of doubt that this beautiful vision which is conjured by the media, and which is swallowed whole by a critical mass of Americans, needs to be reconsidered in light of some alarming statistics that show stagnation rather than progress.

African American unemployment is at 16%, about twice the national rate (not adjusted for the African American prison population). If the current increase in rates of imprisonment continues, two out of every three African American males between the ages of 18 and 34 will be locked up by the year 2020 . Lastly, the median wealth of white households is 20 times that of black households. This is 149 years after Emancipation!

What does an evolutionary perspective add to understanding the persisting inequality between African Americans and Euro-Americans? What does evolution have to do with racism and oppression of minority groups? I talk with Kristin Rauch about these questions and her work.

Kristin Rauch is a Ph.d candidate in Evolutionary Anthropology at UC Davis.